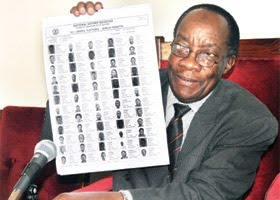 Computers can be programmed such that when fed with information as received from various Polling Stations, the result on being subject to some in – built computer programme can easily give altered results, hence one way in which the cheating of final results can be effected. Therefore, there is need to ensure that computers before use for tallying results are clean of such programme. This is a result of the recent development where the Chairman of Uganda’s Electoral Commission received Computers and accessories from China. While we appreciate the donation, the Electoral Commission was not so needy given that billions have been spent; which should suffice to cater for such basics, what is critical is using tricks to give Ugandans the wrong results.
Secondly, Dr. Kiggundu should stop taking lightly the issue of Voter Cards. If Kiggundu disqualified those who nominated Presidential candidates because they had no Voter Cards; he has NO MORAL AUTHORITY to claim that those with NO Voter cards as long as they are on the Voter Register are free to vote. Kiggundu ought to remember that the NRA/M waged a 5 year Bush war on the Government of Uganda which was in place using the Stealing of Votes as the basic reason and the cost of this war has never got off the face of Uganda, so, Kiggundu ought to give the request by civil society members his ears and act to have the Voter cards ready and issued before the Polling day to all who qualify to have them.
We the Civil society members don’t want any lousy excuses from the Commission, we just want Voter Cards. Also, the Commission should give us the Voter’s Register in a programme where it is possible to use a Sorting Function to be able to establish where there are no names duplicated, etc. This is what the democracy we cherish costs. In a PDF format, it is impossible to play around with the Register so as to establish a few basic facts.
wILLIAM kITUUKA kIWANUKA

THE Electoral Commission (EC) has reaffirmed that the photo-bearing voters register shall be the basis of voting in the up-coming elections and not the voters’ cards.
Addressing journalists at the EC offices in Kampala yesterday, Kiggundu said the decision not to produce more cards was taken in line with the government’s plan to issue national identity cards.
A sum of $35m (about sh81b), he added, would be needed to produce the cards, yet it could be diverted to producing national identity cards.
The commission has legal basis to use the photo-bearing voters’ register as the cardinal document for issuing a ballot paper,” Kiggundu said.Candidates, he added, should only urge their registered supporters to prepare to vote since the information about the register containing 13.9 million voters at 23,968 polling stations had been published.
“The procedures for the declaration of election results are clearly stipulated in the electoral law, and shall be followed,” Kiggundu said.
The commission, he added, had made arrangements that all stakeholders are involved in the electoral process, including accrediting political parties to participate and observe the various stages.
The stages, Kiggundu added, include recruitment and training of polling officials, polling day activities and tallying results at the district and national level.
He noted that the ballot papers were being printed in the United Kingdom, South Africa and China and political party representatives had been accredited to observe them. The ballot papers, he added, would arrive at least two weeks before the elections.
Kiggundu also announced the donation of 307 computers, 101 printers, 70 laptops and five scanners from China, “which will strengthen data storage and management at national and district headquarters.
He said the case of the radio station in Nakaseke district that denied Besigye chance to appear on a radio programme was being followed up by the broadcasting council and so was the incident of the motor vehicle belonging to an opposition candidate that was burnt on New Year’s Eve.
Posted by williamkituuka.com at 11:35 PM