Two studies released Wednesday show AIDS drugs can sharply reduce the risk of heterosexuals acquiring HIV, adding to a growing number of new methods to slow the spread of the virus world-wide. 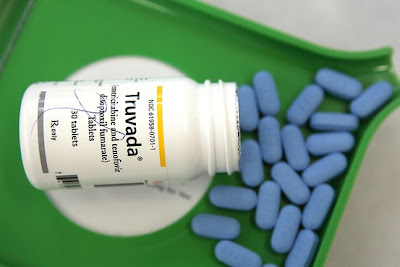 A bottle of antiretroviral drug Truvada, the brand name of emtricitabine, is shown at a California pharmacy in November 2010. Researchers found that couples in Africa, in which one partner had HIV but the other didn't, had an average of 73% fewer infections when given daily doses of that drug and another medication.
Many researchers now believe science has developed sufficient tools to contain the pandemic, which is thought to infect about 2.6 million people annually. But tight budgets may limit deployment of these methods.
The results are the latest to demonstrate existing medications are an important tool for prevention as well as treatment of HIV/AIDS, and to show their effectiveness in the population hit hardest by HIV globally—heterosexuals in Africa. The findings also are likely to help alleviate concerns that emerged in April after another study was unable to determine whether the drugs protected women at high risk, despite an earlier study that had shown their effectiveness in gay and bisexual men.
Both of the studies, conducted in Africa, found giving antiretroviral drugs to uninfected heterosexuals reduced their risk of HIV by at least 62%—"which is huge," said Jared Baeten, co-chairman of one of the studies, led by researchers at the University of Washington International Clinical Research Center.
That study examined 4,758 heterosexual couples in Kenya and Uganda in which one partner had HIV and the other didn't. Researchers found those who received a daily dose of a drug called tenofovir had an average of 62% fewer infections than those taking a placebo, while those who received a drug combining tenofovir and another medication, emtricitabine, had an average of 73% fewer infections. The drugs, marketed by Gilead Sciences Inc. as Viread and Truvada, respectively, are thought to work by preventing the virus from replicating and establishing an infection.
The study, funded by the Bill and Melinda Gates Foundation, wasn't supposed to end until late 2012. But after reviewing partial results, an independent data and safety monitoring board decided Sunday to halt the trial early because the findings were so strong, Dr. Baeten said.
"We're stopping a year and a half early—really, on a dime—because the results were so powerful," Dr. Baeten said. Trial participants who were receiving a placebo will stop getting it Thursday, and they will be offered the chance to take the antiretroviral medicines, Dr. Baeten said.
Related

In an interview with WSJ's Mark Schoofs, NIAID director Dr. Anthony Fauci reflects on his thirty years spent fighting AIDS, and how he believes science is at a turning point where it has the potential to dramatically shrink the size of the AIDS epidemic across the globe.
A separate study led by the U.S. Centers for Disease Control and Prevention of 1,200 uninfected heterosexual men and women in Botswana found those taking a daily dose of Truvada reduced their risk of acquiring HIV by about 63%, compared with those taking a placebo. CDC researchers believe the results may be even stronger among participants who adhered closely to the regimen.
"We're beginning to understand that these antiretroviral drugs are powerful tools for prevention tool kits," said Kevin Fenton, director of the CDC's National Center for HIV/AIDS, Viral Hepatitis, STD and TB Prevention. The CDC had planned to release next week the results of its four-year study, which it finished earlier this year, but accelerated the release to coincide with the other results, he said. 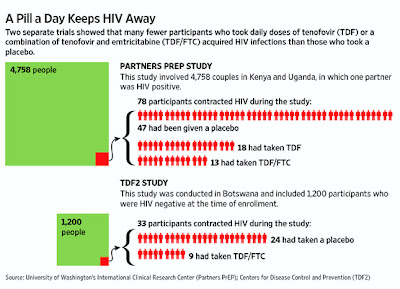 The new studies add to a rapidly expanding suite of prevention methods beyond behavioral efforts such as encouraging condom use and abstinence. "As we get more scientific data, the ability to contain the epidemic by multiple weapons gets better and better," said Anthony Fauci, director of the National Institute of Allergy and Infectious Diseases. In the past year, studies have shown reductions in contracting HIV among uninfected gay men taking AIDS drugs and among women who applied a vaginal gel containing an AIDS drug. Also, infected people treated with the drugs were shown to be 96% less likely to transmit HIV than patients not yet on therapy. And circumcision has been proven to slash the chance a man would acquire HIV.Even before the latest two studies, Dr. Fauci wrote a widely discussed editorial in the journal Science stating, "For the first time in the history of HIV/AIDS, controlling and ending the pandemic are feasible." A major problem is financing for HIV/AIDS, which fell for the first time in 2010 for low- and middle-income countries, according to the Kaiser Family Foundation. But, Dr. Fauci wrote, "Major investments in implementation now will save even greater expenditures in the future."
The next step is to figure out how best to use AIDS drugs for prevention. No one is suggesting that masses of women in Africa or anywhere else be placed on drugs to prevent infection; that would be too expensive, and the drugs can cause side effects. But it might be cost-effective to target high-risk women, such as sex workers, several researchers and advocates said.
The CDC plans to develop guidance for their use in the U.S., Dr. Fenton said. The agency said Wednesday that interim guidance it issued earlier this year for use of the drugs among gay and bisexual men could be used for heterosexual patients who urgently need the drugs. The drugs should be given only to patients at high risk of HIV infection and only with other forms of prevention such as HIV testing and condoms, the agency cautioned.
"The challenge is moving from the trial to real world implementation," Dr. Fenton said. "We need to understand in which populations to apply them" and how to combine them with other prevention tools, such as counseling and HIV testing, he said.
In a move aimed at increasing access to AIDS drugs world-wide, Gilead said Tuesday it had licensed the rights to several of its therapies to four drug makers in India, as well as to an international organization called the Medicines Patent Pool, which plans to license the rights to other companies. In the U.S., 30-pill bottles of Viread cost $693.74 and of Truvada cost $1,074.64, according to a Gilead spokeswoman. Gilead's deals with Indian drug makers have cut the cost of its antiretrovirals to as little as $6.15 a month, or 21 cents a day in some countries, a Gilead spokeswoman said.
The two studies resolve a contradiction that had puzzled researchers. In April, a study in which women were given the same regimen was stopped because it was unable to determine if the drugs had any protective effect, a result widely considered a setback. The studies reported Wednesday suggest the inconclusive study had unrecognized problems, perhaps in participants adhering to the regimen.