On Sunday, July 24, 2011 I wrote: "THE HIGH TENSION CABLE AT KAJJANSI IS A REAL TIME BOMB," and shortly after, I got a response from Najjanankumbi Manager that they were to handle the matter. I am happy to note that a few days ago, the dangerous power cable was replaced.
I wish to thank all who cooperated to see the replacement a big success.
Thank you so much. I wish to request UMEME to set up a small office at Kajjansi which residents can approach over power problems. This will greatly rule out the use of 'kamyufu'who some members of the public resort to for fixing power problems.
William Kituuka Kiwanuka 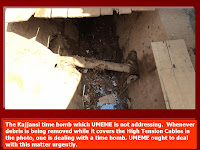 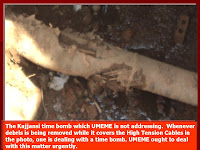 Business goes on as usual at Kajjansi Trading centre, but the place is on a time bomb in the form of high tension cable that is exposed and all the time workers on drainage are in the area, one is not sure that an explosion will not go off.
I don't know how many times i will address this matter before the concerned authorities do something about it. I feel I am tired.
As a measure to reduce on accidents as people cross the road at Kajjansi trading centre, a bridge was constructed. When the work was complete, the high tension wires were put in a cable and now they are passing underground. However, it is like Umeme may not be doing regular checks on this installation which could soon or later prove a time bomb moreso that it is going through a waterlogged place. The most deadly area is where this cable is crossing a drainage channel and the debris which is moved in this channel has eaten away the plastic cover on top of this cable! Unfortunately, fellows working nearby don’t know how deadly this area can be.
Can Umeme or other concerned do something urgently, and may be it would be best to demarcate the whole area through which this cable passes so that petty business people keep away.
2ndly, it is not unusual for power to get off at Kajjansi trading centre either due to technical problems or over load and one time a truck popularly known as ‘magulu kumi’crashed into an electric pole and explosions were experienced. In such instances, the popular ‘kamyuffu’ are the relief. It is overdue for Umeme to have a resident office in Kajjansi trading centre instead of waiting to get calls from Kajjansi when there are power related problems. Can management look into this.