UGANDA GOVERNMENT MUST DEAL WITH MURDERS

UGANDA GOVERNMENT MUST DEAL WITH MURDERS
Uganda Government must deal with murders. We simply cannot keep devaluing life simply because some fools either want to accumulate. Every other day we hear about recruitments, what are these people doing? Less than a week ago, a body of a person believed to have been murdered was recovered from Kajjansi Pan water body. can you believe that this body is almost directly opposite where a number of police officers sleep in a tent? Who has such courage? To the Government of Uganda, this is a Protest Note; we simply cannot live as if we were in stone age times. How on earth do these so called rich men in uganda keep on sacrificing children as if there is no Government? Why are we not having villages mobilizing for this effort if they can assure the public that they will not be part of the gangs to terrorize the population. To Uganda Government, enough is enough. people's lives are not cheap, they must be safeguarded.
The hajji below, we are told that a dog was able to follow up to his house, surprisingly, you may find this Hajji released, after a 9 months child was brutally killed. 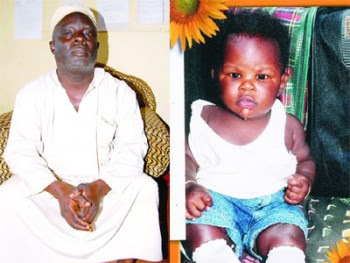 The hajji is the photo can afford to fool around and even smile! 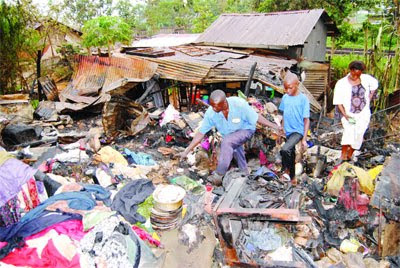 The other fool burnt the house in picture and an innocent child died there!

To the Government of Uganda, the murders must be contained.
Posted by williamkituuka.com at 7:20 AM