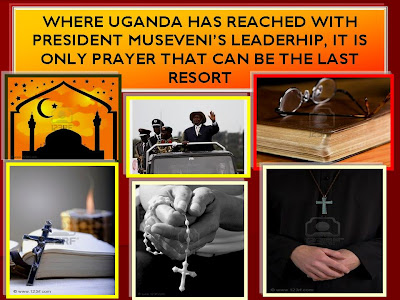 IT IS ONLY PRAYERS THAT WILL HELP UGANDANS SEE MESEVENI OUT OF OFFICE
Many people are resigned this time. Much as the Presidential candidates were disorganized and decided to stand as many as 7 contesting for the Presidential seat, Ugandans believed that none of the candidates would make the 51% required for out right win. The unbelievable happened that Museveni scored over 68%, hence automatically qualifying for another 5 years. Many see 5 years too long given the state of the country. However, with time, I have come to trust the Mighty hand of God. We have only to keep praying, a miracle will happen. A person who disguised himself as a saviouor of the country is instead seeing the country drown! There are developments which took place during the campaigns; like the way Museveni was endorsing the awarding of new district to every Harry and Dick that approached him, yet there is a clearly stipulated procedure which also involves the Parliament in approving new districts. This may be better termed as misuse of power which becomes a design when a leader overstays in power, as we experience with those African leaders who see themselves indispensable! I wondered whether the long stay in office had put President Museveni so low that he could virtually endorse what the electorate wanted. This was worsened when he promised to pay for the land that the Moslems had lost. This type of leader is nothing better than the biggest liability we may have had since Independence.
Uganda is indeed a laughing stock, unbelievable! We have pastors many with authority, who have been party to scandals that can not be expected of people with such titles. We learnt of the so – called Pastor Muwanguzi who was found with a gun and alleged identification with State House connections! Looks like much of what the NRM does as of now is driven by the devil. We now see the so – called Pastor Peter Sematimba who not only academically does not qualify for the position of Lord Mayor, but NRM wants him there at all cost.
My advice to Ugandans is simple, pray to God daily or whenever you have opportunity so that He helps using His Mighty power to get Museveni’s leadership to an end before the country is completely ruined.
I imagine what the youth learn from the NRM leadership and whether this is to make them better citizens or a liability to the country. It is absurd, but that is power. It has corrupted them so much, they are not ashamed where one would be ashamed.
Fellow Ugandans, just pray to God, He is the only last and first resort in situations of the nature including bad leaders.
William Kituuka Kiwanuka.
Posted by williamkituuka.com at 10:19 PM