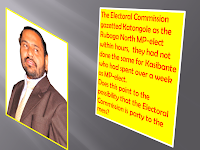 It is not clear where this Singh man came from. A man from nowhere with good evidence by himself that he lost a lot of money to voter bribing and hence wanted to use that to secure the Parliament seat at all cost. Kasibante has gone through a lot of trial courtesy of the NRM which long ago lost credibility and resolved to use voter bribing given the badly impoverished citizenry they have created. What Kasibante is going through and making his swearing a problem is just part of the trials Ugandans have to go through to see that a regime which is more of a liability is exposed. There is all the hope that the voters will get the right person they voted for into the Parliament and not an impostor.

The High Court in Kampala, has declared Moses Kasibante the duly elected member of Parliament for Rubaga North saying he was the rightfully elected member of constituency. In a judgement which lasted more than one and a half hours, High Court Judge Justice Kibuuka Musoke faulted the Mengo Chief Magistrate for issuing a vote re-count order and abdicating the re-count process to a third party which should not have been the case as stipulated by the Parliamentary and Presidential Elections Act which led to the mess that followed the process later. The ruling brings to an end Mr. Katongole Singh's brief parliamentary career that saw him make a submission during the heated oil agreements debate in the house in support of the NRM party.

What makes the new Rubaga North MP so powerful?
The new Rubaga North MP, Parminder Singh Katongole, has imprinted himself on the politics of Uganda in an interesting fashion.
In a space of three months, he got the Electoral Commission to implement a vote recount against a court order and gazette him speedily; the recount, later declared ‘of no consequence’ by Judiciary spokesperson Erias Kisawuzi, took place within the precincts of Buganda Road Court; and Parliament brought forward his swearing-in by a day, catching his opponents off guard.
Those events and others have got people asking what makes Singh so powerful.
Asking the diminutive Ugandan of Indian extraction, who spots a ponytail, will not reveal much. He will smile at you, speak to you in Luganda if you like, or English with equal ease. Those who claim to know him will tell you he is tough and easily irritable.
NRM insiders say he is “an asset” to the ruling party as a fundraiser, mainly from the powerful Asian community of traders, industrialists, and large commercial farmers. A businessman himself, with interests in the popular big concert venue, Kati Kati Restaurant, and Catnkar Limited, a fuel and transport company, he melds well at the class and ethnic interest levels. Within the party, however, he also keeps the right company. NRM insiders say Katongole works closely with the powerful party secretary general and newly appointed Prime Minister, Amama Mbabazi. In the last election, for example, as the party’s deputy treasurer, he was in charge of all money for campaign activities.
It is not for nothing that party mobilisers at Kyaddondo road call him ‘Uncle Money’, an image he maintained in Rubaga North as he campaigned to enter Parliament. He printed huge campaign posters, dished out money to youth, women and other groups and individuals and donated an ambulance van to the constituency with his campaign picture imprinted on it.
But such power can only carry you up to a point. When his swearing was brought forward by a day to May 16, acrimony erupted because back in the contested constituency, Rubaga North, his challenger Moses Kasibante was engaged in running battles with the police as he tried to stage a protest against Katongole’s swearing in.
Kasibante was originally declared winner of the Feb. 18 election with 24,054 against Singh’s18,595 but a misty vote recount over a week later reversed the verdict, giving Singh 24,802 votes against Kasibante’s 22,850.

The recount, which went on into the dead of the night on Feb. 28, proceeded under tight security, oblivious of the High Court order stopping it.
Katongole had secured an order for recount from Mengo Chief Magistrate’s Court claiming that results from some polling stations had not been tallied. Kasibante successfully challenged the order, citing among other reasons, that some of the ballot boxes presented for the recount were not properly sealed.
But the recount continued because the Electoral Commission officials doing the job argued that the High Court order arrived ‘too late’ when the recount had already started.
The Electoral Commission gazetted Katongole as the Rubaga North MP-elect within hours, even if they had not done the same for Kasibante who had spent over a week as MP-elect.
Kisawuzi denounced the recount, saying the lower court had defied a High Court order.
In the High Court, Kasibante’s lawyer, Erias Lukwago, added to the controversy by submitting that the Electoral Commission flouted the law by gazetting Katongole without a certificate of recount from the Mengo Chief Magistrate Phillip Odoki who was supposed to have supervised the recount.
But Kasibante was confronted by a powerful legal team extracted from Akampumuza and Company Advocates, Mugenyi and Company Advocates, and Mwesigwa Rukutana and Company Advocates.
Singh’s lawyers resorted to what Kasibante’s lawyers call delaying tactics, asking the High Court to refer the case to the Constitutional Court for interpretation. Judge Vincent Zehukirize saw no reason to refer the case to the Constitutional Court. He ruled that the matter Singh wanted to refer to the higher court, that he had been racially abused, was not part of the issues to be determined.
But Katongole appealed the ruling, in the process delaying the hearing of the main suit. He was eventually sworn in before the suit was disposed of.
The main case will now be heard between June 13 and 17 but observers say that even if Kasibante wins it, he would still have a lot of time to wait since Singh has the option of appealing to the Court of Appeal and again to the Supreme Court. The process could take years.
Katongole may have imprinted his name on Uganda’s politics as a politician who gets his way regardless, but the same tag has sparked grumbling from unusual quarters; his colleagues in parliament.
On his maiden showing on the floor of Parliament, Katongole was greeted with sarcastic applause and boos from his colleagues.
Fluke, fluke, shouted Mukono Municipality MP Betty Nambooze, who is among those who maintain that the genuine winner of the constituency was her colleague, DP-leaning independent candidate Moses Kasibante. But Katongole remained unfazed.
“I fear only God,” he defiantly told reporters at Parliament after his acrimonious swearing-in on May 16. Of the Kasibante group challenging him he says simply that they should learn to concede defeat gracefully. “Why don’t they want fairness,” he asks, possibly unaware that those he has stepped on to get to top feel he is doubly unfair
Posted by williamkituuka.com at 12:43 AM