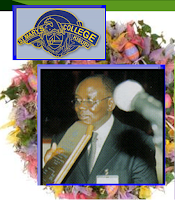 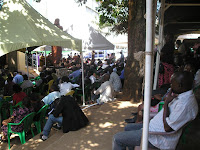 The photo is of the people who failed to get places to sit inside the Church during the Requiem Mass of Dr. George William Mayanja. By 9.30 am, the Church was already full and those who came after had either to stand or look for seats out of the Church. This is evidence enough of how much Dr. Mayanja was missed by many.
I learnt about an Ultra Modern Clinic that had opened shop on Spear House - Jinja Road in 1990 when I was a staff at Nile Bank which was on ground floor on the same building. It was so near compared to Industrial Medical Services where I used to get treatment. One day, I ventured and visited Victoria Medical Services as a patient. I thought this facility had been uprooted from outside the country and planted at Spear House. I had not seen a medical facility of its try in Uganda. It had among other things an equivalent to nursery school play facilities which would get the child’s attention from the fear associated with visiting a clinic as injections are what children anticipate. The staff at the clinic were extremely smart and had that customer centered care, the atmosphere gave one the impression that his or her health was bound to be well catered for and would surely recover. When it came to my turn as we followed the queue, Charlotte’s mother (this is the mother of eldest child of Dr. Mayanja) processed a file for me and it was delivered to the Doctor’s room. I met Doctor Mayanja the first time, and he was happy that I came from Nile bank. The staff of the bank who were clients were not expected to pay cash, but would have their bills sent to the bank on a monthly basis. From the first meeting, Dr. Mayanja became a friend. It is no surprise that the cute and superb service induced many clients to join as beneficiary.

During the course of 1990, I got a baby boy who had a health problem which Doctor Mayanja diagnosed; however, given that he did not have facilities for admission, he referred me to Kisekka Hospital. I was surprised to learn that Dr. mayanja had got time to check on my child’s progress at Kisekka hospital. This is the great doctor who passed away on March 31, 2012. Victoria Medical Services had a number of consultant doctors who Dr. Mayanja had mobilized. For whatever health problem, there was a consultant who would check on the patient given the schedule, however, in case of an emergency, the consultant would be called in to attend to the patient.

As I kept interacting with Dr. Mayanja and his friendly staff, I later learnt that he was an Old Boy of St. Mary’s College Kisubi, and that he wanted the Old Boys to work as a group and also attend functions as organized. The 1st function I attended was on April 7, 2002 a re-union of the Old Boys of St. Mary’s College Kisubi. On that day there were awards to the Old Boys who were nominated by the Executive of the Old Boy’s Association as having excelled in various fields in their career life., and Dr. Mayanja had played a leading role in the innovation. Among those awarded were Charlie Lubega for his driving skill; Hon. Edward Kiwanuka Ssekandi; Hon. Paul Kawanga Ssemwogerere; Prof. Mukibi of NARO; others included Prof. Fredrick Ssempebwa; Prof. Francis Omaswa; Mr. Tibeyita (East African Development Bank); Justice Joseph Mulenga; Mr. John Kamya; J. B Walusimbi (Sr) a former Permanent Secretary; Mr. Obura formerly with Bank of Uganda and a Sports guru; Mr. Roy and outstanding businessman and Prof. Kakande.

To have had the ability and capacity to rent big space on Spear House and a flat on the same house for his accommodation, Dr. Mayanja showed that he was a living example of a medical doctor who had mastered marketing and business management. Given the impression one got on calling at the Victoria Medical facility, it was natural to tell a friend about a well organized and very clean environment with a lot of professionalism that Dr. Mayanja had spearheaded which later revolutionalized the private medical practice in Uganda; and it has never been the same. Proof of the innovativeness was the eventual acquisition of Plot 25 Lumumba Avenue where Victoria Medical Services shifted to after 10 years at Spear House, and it eventually evolved into Victoria Medical Centre. While of Plot 25 Lumumba, it was common for me to call on Doctor Mayanja and he would most of the time tell me to hold on till lunch hours when he would have ample time in the lunch interval to discuss issues with me. At times he would tell me to wait for him so that we travel together along Entebbe Highway, this when he would be going to Kisubi Hospital or the Facility branch on Gowas street at Entebbe or when he would be going to his commercial farm in Ssisa and at times when he needed to check on his Late father (Ddamulira) who was sickly. He would on most of those occasions drop me at Kajjansi trading centre and would continue with his business. I recall a day when we went up to Gowas medical facility, and after a short call on patients had a meeting with Dr. Rama Makuza regarding the SMACK Centenary celebrations. Dr Mayanja was an enterprising commercial farmer; together with Engineer Kasekende (an Old School friend) they managed a farm deep in Ssisa Sub-county. On one occasion, together with Dr. Mayanja we called on a mill at Kawuku (Entebbe Highway) which was handling the maize they had grown.

Once in a while, Dr. Mayanja told me about his business undertakings. One day he placed an application to a Government Department for a used double cabin vehicle, we together delivered the application and shortly after, he got the vehicle which helped him with his farming errands. On other occasions, Dr. Mayanja was a man of Mercedes Benz vehicles.

When St. Mary’s College Kisubi Centenary celebrations were about a year, Dr. Mayanja encouraged me to help in the preparations exercise. The days when I met him, he had earlier told me to call towards lunch hours and it is during then that we would have ample time to discuss in a free environment, and he would always ensure that I ate lunch with him. This led to his calling Brother Edward Bukenya, head teacher at SMACK so that I get a room allocated to finish the assignments that were due. In the process of doing the work more so unearthing the 100 year history of the school, I made discoveries which include a statue of Virgin Mary donated to the school around 1912 which currently is at the Father’s residence at Lubaga Cathedral. 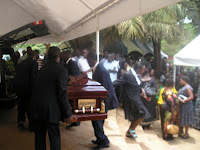 Dr. George William Mayanja's body being taken to the vehicle to the final resting place at Seguku - Naziba Village after the Requiem Mass at Christ the King Church where he had always been for the very early morning mass.
The unfortunate development was however a health problem which Dr. Mayanja got in 2006 and he needed to go out of the country for treatment, this was around March to May and he later told me it had cost him shs 20m. I was concerned, and may be this was the start of the journey that has finally claimed him. I however remember going with him for SMACK Centenary meetings, and one such meeting was at Fairway Hotel which was attended by among others Hon. Paul Kawanga Ssemwogerere and Prof. Mukibi, I however remember that though he had just met his big medical bill, Dr. Mayanja footed the bill for the group lunch.

I had got so close to Dr. Mayanja that on some occasion he gave me the password to his email (victoriau2000@yahoo.co.uk), and there were instances where he regarded me as someone who was knowledgeable in certain aspects. On weekends, Dr. Mayanja would never leave the clinic if there was no doctor relieving him. Weekends are normally lousy days (most activity is from Monday to Friday). He was strict that staff performed their work as per his desired outcomes. It was challenging time a few months to the SMACK Centenary celebrations; however, Dr. Mayanja used to balance up his schedule and on a number of occasions would pick me up from the NOOK office which had been acquired through his courage more so that rent payments for SMACK OB’s Club house were anticipated from Uganda Martyrs Secondary School who were renting the premises as a dormitory facility for the girls.

We surely shall greatly miss Doctor George William Mayanja. I wish to propose to the Executive of the Old Boy’s Association that Charlotte the eldest child (daughter) of Dr. Mayanja be invited on SMACKOBA functions in place of his father who has been a real pillar for the association and St. Mary’s College Kisubi where at the time of his death was the Vice Chairman to the Board of Governors. Dr. Mayanja’s efforts to be better health of the Old Boy’s Association have paid off and this is seen in increased activity and interest by the Old Boys. 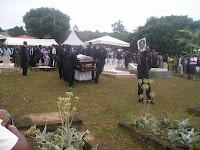