ST. MARY'S COLLEGE KISUBI WELCOMES HIS HIGHNESS KING MUTEBI ON THE OCCASION OF HIS 57th BIRTHDAY 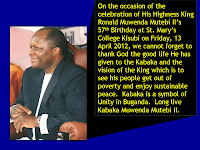 On the occasion of celebrating His Highness Kabaka Ronald Muwenda Mutebi II’s Birthday at St. Mary’s College Kisubi, Kisubi Catholic Parish is most grateful to the Kingdom of Buganda for the 41/2 square miles of land donated, which is the basis of developments which range from academic and vocational establishments including a University, to a Hospital in the name of Kisubi Hospital not forgetting Marianum Press, the Gogonya Sisters, the Brothers of Christian Instruction and Kisubi Seminary.
Your Highness, Kisubi Parish is committed to putting the land as donated to good use for the development of Buganda and Uganda at large.
We are most grateful.

Guests at the SMACK Sports Day. Holding the microphone is Prof. Kirumira, next in a white cassock is the only 1st African Headmaster of SMACK – Brother Anthony Kyemwa and to the right in a white shirt with SMACK logo is Brother Edward Bukenya Head teacher SMACK

Three Houses can clearly be seen by their colours: Lourdel (Green), Kiwanuka (Blue) and Kakooza (Yellow) –n the Sports Day.

The Sprite Slam Function at SMACK

FOOD AS PREPARED BY THE BOYS IS READY FOR EATING

The Outer view of the new Dinning Hall

THE INSIDE OF THE NEW DINING HALL

ARCHITECT SSENTOOGO AND DR. RAMA MAKUZA AT THE ANNUAL GENERAL MEETING OF THE ST. MARY'S COLLEGE KISUBI OLD BOY'S ASSOCIATION DURING WHICH DR. MAKUZA HANDED OVER TO A NEW EXECUTIVE

Tarmacking the walkways
Posted by williamkituuka.com at 6:33 AM