FORCES IN NATURE CAN DEAL WITH DICTATORS

At least 300 families in Namalu Sub-county in Nakapiripirit District have been displaced and crops destroyed following torrential rainfall that left the area flooded on Thursday.
The worst hit areas are Nakiloro village in Lokatapan Parish and Kokuwam and loperot parishes in Namalu Sub-county. An estimated 50 hectares of cassava gardens, green grams, potatoes and peas in Namalu Sub-county were totally destroyed by floods.
Ms Lucy Nakut of Morugajore village said seven hectares of her cassava gardens in Okudud village were totally destroyed and her hut and chicken were washed away by water torrents.
Ms Nakut has relocated with her three children to Namalu Trading Centre. Mr Mark Logiroi, another victim, said he has always had plenty of food and never been a beggar but the floods, he said, will force him to begin begging.
“What I had harvested and stored in my granary and what I was expecting to harvest have been destroyed and I don’t know where to start from,” he said. Mr Simon Lemukol, the LC3 chairperson of Namalu Sub-county, described the aftermath of the floods in the area as a total loss to the families of Namalu. He said residents of Namalu have never experience such floods.
“We used to have heavy rains and floods but not of this kind, which hits for a single day and displaces a big number of people like this,” Mr Lemukol said. He appealed to government for relief material to the affected families, and urged that the families should be supported to embark on fresh farming if they are to cope with the Thursday loss.
Former Nakapiripirit chairperson John Nangiro appealed to government to provide food and planting materials to help the affected families to cope. He said transport in the area has also been affected by the floods since calvats have been washed away.
Two months ago, torrential rains that battered eastern Uganda for days left Bulambuli, Kween, Kapchorwa, Butaleja, Bukedea and Amuria districts submerged, with the residents counting the cost and relying on relief. The floods also ravaged road network linking Sironko, Bulambuli, Nakapiripirit, Moroto, Kotido districts. 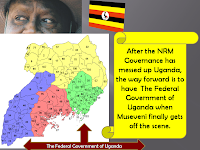 Many people in Uganda are surprised by the turn of things in 2011; a currency depreciating at unprecedented rate, corruption cases unearthed at a magnitude never anticipated, poverty beyond definition, floods leading to the cutting off of some districts of the country, voter bribery of unprecedented levels in Uganda’s history, power shortages at levels never anticipated a development that is getting many out of business to name just a few. Virtually everything has gone wrong. When people fail to get a fair deal from dictators like President Museveni, God has been so good that He sets in motion forces of nature to deal with such. It is common knowledge that the Constitution of Uganda clearly stipulated that a Presidential Term in office is a maximum of 2 consecutive 5 year terms. Where did Museveni get the mandate to extend the term indefinitely? President Museveni keeps telling us about how he fought. I wish to clearly inform him that Uganda would be far in terms of real growth and development if he had not gone to the bush. It is now clear that the Museveni group had a hidden agenda which is throwing Ugandans into unprecedented levels of poverty and deprivation. The country has got huge sums of money to see to the welfare of the people from the donor community, much of this money is corruptly shared, as if Museveni is not aware! Instead of leaving the justice system to deal with the alleged culprits, time and again he comes out with statements which are clearly out of his mandate given the role the judiciary is supposed to play. Much of the country’s resources have been lost. The President is party to wasting taxpayer money with the most recent cases of the purchase of fighter planes which are not productive at all, yet the countrymen are yawning on. The youth have no employment opportunities, instead, Museveni and his Government ‘invest’ into their continued tenure as the country yawns for better allocation of resources which unfortunately Museveni cannot deliver any more to the country. He is so compromised. We shall never forget the patronage which has cost the country a lot of resources that would have been invested productively to benefit the country and its future. He has wasted taxpayer monies into schemes of useless presidential advisers; sub-divided the country into uneconomic districts yet the country has no resources to sustain them.

On behalf of many people of Uganda who wish the country better, our prayer is for the good Lord to change the hardened heart of President Museveni. His government has deliberately sat on monies due to Buganda Government in form of rents due to premises rented by the central government, yet the Buganda Government is trying its best to bail people impoverished by the ill advised and corruptly driven programs of the NRM Government which have left many in dire need. Mr. Museveni should realize that being a President makes him take on the responsibility of seeing the people under him better off, but not impoverished as he maintains grip on power.

In 2006, President Yoweri Museveni announced a policy of zero-tolerance for corruption. However, at the beginning of Museveni’s third term, most governance indicators showed that corruption was perceived as widespread and endemic at all levels of society. The Global Integrity’s 2006 report on the country estimated that more than half the government’s annual budget was lost to corruption each year, amounting to USD 950 million. In 2007, the government circumvented official procurement guidelines to contract Kenlloyd Logistics, to replenish Uganda’s fuel reserves. To-date it is doubtable that value for money in this undertaking has been realized. Public procurement is one of the sectors most affected by corruption in Uganda. According to the 2007 African Peer Review Mechanism Report, Uganda loses USD 258.6 million annually through corruption and procurement malfeasance. The report further estimates that if the country could eliminate corruption in public procurement, it would save USD 15.2 million a year. In the assessment of the country’s Auditor General, procurement accounts for 70% of public spending, of which an estimated 20% is lost via corruption. In June 2008, a senior World Bank official stated that high level corruption in procurement deals had been responsible for a loss of USD 300 million since 2005.

The people of Uganda ought to be told the truth in case there are some who don’t know; that the country needs a new lease of life under different leadership, however, we don’t need another military dictatorship; if civil disobedience cannot deliver change in Uganda, we may have to wait up to 2016; it is true that bribery of voters is a ‘big gun’ for the NRM Party, our prayer is that common sense will prevail among the party members who should be the ones to nominate and thereafter elect a Party President, that this time they will see the light that Museveni as a leader of Uganda has expired and the country can only be salvaged if they get a President who can live within the confines of acceptable principles of Good Governance. And such a one should be ready to leave the people have their thing, that is a Federal System of Local Governance which should yield to The Federal Government of Uganda.
William Kituuka Kiwanuka
Posted by williamkituuka.com at 3:50 AM