Can Transparency International release the report the Late Robinah Kiyingi last worked on? 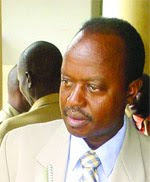 The question of who killed Robinah Kiyingi is still unanswered. It looks like Transparency International has the clue. By copy of this communication, can TI release for public consumption the report that MUST have led to her death? Below is testimony by Dr. Kiyingi . Robinah, .

1) But another angle went unexplored: Robinah had upset powerful forces in the country because she was determined to release a damning new Transparency International report about high-level corruption, sources in Kampala told The Weekend Australian.

2) In the months before her death, Robinah was involved in an embarrassing TI investigation of political corruption, bribery and kickbacks to local leaders.

3) Kiyingi, the son of a farmer, said yesterday he had no qualms about the division of the couple's assets in a divorce and would never have contemplated harming his wife, whom he met when they were students at Makerere University . "Yes, we had serious problems, but so what? When I found there was nothing much I could do, I filed for divorce. I don't think I have ever wished her bad things at all. She was a very good lawyer, top class. She's the mother of our children."

In the heart of an African nightmare
Hedley Thomas
From: The Australian
STANDING quietly above the open grave of his murdered wife, Sydney cardiologist Aggrey Kiyingi shuddered as something hard and menacing prodded his lower back.

A casket containing the body of Robinah, a top legal advocate and renowned corruption fighter in Uganda and a lawyer in Australia, had just been gently lowered into freshly dug earth.

Kiyingi, an Australian citizen who raised his family in Sydney after fleeing Africa's violence a quarter of a century ago, turned to face two plainclothed officers from Uganda's criminal intelligence division. The prod came from a pistol.

"We want to talk to you. Now move," one officer told Kiyingi in the grounds of the cemetery in Kitetikka, just outside the capital Kampala, before forcibly escorting him from the funeral.

Kiyingi, 52, the once-revered son of a country regarded by international agencies as dangerous and graft-ridden three decades after the downfall of president Idi Amin and his state-sanctioned death squads, was stunned. His four adult children and many among the hundreds of mourners, a Who's Who of Kampala's educated and professional class, were equally aghast.

The uncomfortable walk signalled the start of an 18-month ordeal that would draw to a close this week with Kiyingi's acquittal on charges of killing his wife. The case would put Kiyingi's life in Australia on hold, leave him languishing in a Ugandan prison, and ultimately pit him against his own kin: two of his children would testify against him in a sensational trial that was ringed by murders, bashings, accusations of adultery and, bizarrely, a movie based on the events.

"I have been through hell, absolute hell," the medical specialist, who lives in the Sydney suburb of Castle Hill, told The Weekend Australian yesterday in an exclusive interview from a safe house in Uganda. "I had a very comfortable lifestyle in Australia. I had been back in Uganda barely eight hours. I was at her graveside, looking down into the grave when he pushed the pistol into my back.

"And later I was in Luzira Prison, almost dying of malaria from mosquitoes and dreadful conditions. I thought it would be fatal, but I already faced the death penalty - death by hanging."

Kiyingi recounts his nightmare in the heart of Africa as if describing an airport thriller involving the execution of Robinah, rampant corruption, a criminal show trial and, for the past 18 months, a belief he would be the next to die.

Just days before his arrest in July last year, Kiyingi had been treating patients at his consulting rooms at Merrylands and at Holroyd Private Hospital in Sydney's west. He was eating breakfast at 6.30am when a relative called.

"He said to me: 'Are you sitting down? Robinah has been shot dead."'

Robinah, the Uganda head of global anti-corruption body Transparency International who used to work for the NSW Department of Public Prosecutions and the State Rail Authority, had died in a hail of bullets from a Chinese copy of an AK-47 while sitting in her car at the gates of her Kampala home.

After confirming the murder, Kiyingi flew to Uganda with two of his sons to bury their mother. He had left his busy Sydney practice many times to return to his birthplace for charitable work, business interests and visits to relatives.

However, the marriage was effectively over, with divorce proceedings under way several years before the murder.

Kiyingi was living in Sydney with his girlfriend, Aida Nakubulwa. Robinah, a member of the Parramatta Lawyers Association and the All Saints Church in Sydney in happier times while raising her children, had moved back to Kampala to grow her legal practice. Title searches yesterday show that she organised caveats to prevent her husband selling their Sydney residential and commercial properties.

Uganda's top prosecutor accused Kiyingi of being a sociopath with the money, motive and cunning to remain in Sydney until a Kampala contract killer had shot his wife dead.

But another angle went unexplored: Robinah had upset powerful forces in the country because she was determined to release a damning new Transparency International report about high-level corruption, sources in Kampala told The Weekend Australian.

They say her husband became an unwitting scapegoat.

In the months before her death, Robinah was involved in an embarrassing TI investigation of political corruption, bribery and kickbacks to local leaders.

Kiyingi, the son of a farmer, said yesterday he had no qualms about the division of the couple's assets in a divorce and would never have contemplated harming his wife, whom he met when they were students at Makerere University. "Yes, we had serious problems, but so what? When I found there was nothing much I could do, I filed for divorce. I don't think I have ever wished her bad things at all. She was a very good lawyer, top class. She's the mother of our children."

Two of those children turned against their father during a sensational murder trial in the High Court, accusing him of treating their devoted mother cruelly and conducting affairs with younger women including his Sydney-based partner, Nakubulwa.

Robinah's sister, Eva Alemu, testified he had threatened to kill Robinah with a spear when it was clear they were divorcing.

"Robinah told me that she was receiving death threats from Aggrey," Alemu said.

There was contradictory evidence from a maid that she was telephoned by Kiyingi with orders to kill Robinah and a goat with a concoction of homemade poison.

But the prosecution case derailed when its key witness - the reputed assassin, corrupt army private John Atwine, who had allegedly confessed that he was paid a small fortune by Kiyingi to kill Robinah - died in mysterious circumstances in the maximum security Luzira Prison.

As Atwine's death occurred while Kiyingi was incarcerated there, he temporarily became a suspect in a second apparent murder. A fresh and unexplained needle mark was found on his left arm. Atwine had claimed to Kiyingi's lawyer that police tortured him into making a false confession.

Another key witness, a leading detective in Robinah's murder probe, Lieutenant Caesar Enya, was found dead with three pistol wounds in his head.

Amid the drama, a local movie director-actor made Murder in the City, a film based on the sensational case with an ending that cleared Kiyingi. Its release last month was overshadowed by the abduction of the lead actor. He was found, bruised and tightly bound, on a railway track at 2am just minutes before the arrival of a local express. From his hospital bed he told investigators that his armed captors had demanded a sequel, called Who Pulled The Trigger? to make Kiyingi culpable for Robinah's murder.

"I haven't seen the movie," Kiyingi said yesterday. "But I feel like a wounded animal because of the attacks on my name, my professional reputation. I have never been able to say anything publicly until now. Hearing my children give evidence was devastating, but I have forgiven them. The children were bringing up things from the past - quarrels in the home - that had nothing to do with it. I'm sure by now they must realise I did not murder their mother. In the trial the pressure on them was immense."

Earlier this week, Kiyingi sat in the dock at the High Court to find out if he would be convicted and hanged with his two co-accused - an intelligence agent and a police officer.

The cardiologist's generosity over many years was put on the public record: millions of Ugandan shillings donated to a local Anglican church and charities; books and computers to impoverished schools and colleges. A major corporation he started, Dehezi International, promotes computer awareness in Uganda as an internet service provider.

Before judge Rubby Aweri Opio retired to prepare his judgment, Kiyingi told the court: "I did not and could not plot or connive with anyone to murder my dear wife, Robinah. I am being callously and maliciously framed by my enemies."

After Justice Opio described the case as too circumstantial to justify anything except acquittal, Kiyingi went from the courtroom to his wife's grave to finish paying his respects. He has pledged to sue the Ugandan authorities for malicious prosecution, but first he wants to return to his cardiology practice in Sydney.

"Ugandan society has already accepted me back. I have not slept over the last 48 hours because people have been expressing their relief and solidarity. Public opinion has been overwhelming."

His lawyer, MacDusman Kabega, told The Weekend Australian: "I was worried about his safety here. We tried for special security. I'm satisfied that the prosecution was malicious in the sense that they did not have any cogent evidence whatsoever."

Uganda Law Society President Deo Rudumba, a friend of Robinah, says it was the most remarkable criminal trial in the strife-torn country's history. He describes Robinah as "one of the most highly ethical and professional lawyers in Uganda, a woman of very good conduct and integrity".

In Sydney, associates and friends of Kiyingi welcomed the news. Westmead Hospital cardiologist David Richards, who has worked with Kiyingi since the early 1980s, said yesterday: "As far as I can tell he's a very dedicated doctor, passionate about providing care to people in Uganda and Australia. He always struck me as a hard-working, God-fearing citizen who had strong ideas and ideals and an ability to achieve great things. He was not malicious or aggressive."
Posted by williamkituuka.com at 3:02 AM