Talk of unemployment and the 4 Principle subjects at HSC 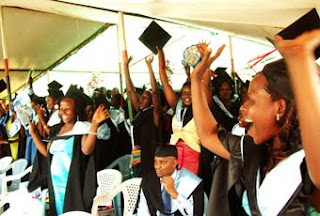 Jobless super graduates!
When the Music Dance and Drama (MDD) degree course was introduced at Makerere University in 1971 many students looked at it with contempt. They coined a derogatory name for whoever enrolled for the course; musiru ddala ddala, meaning a totally and completely stupid fellow!

Today, those who have done the course and go on to practice music or drama are arguably more successful in society than some graduates of the so-called traditional better courses like medicine, law, and management.

Some MDD graduates have emerged as local stars in the theatre and music industry and are highly paid. Celebrity singer Bobi Wine,
international actor Philip Luswata, and theatre legend Alex Rwangyezi of the internationally renowned Ndere Troupe did MDD.

If succeeding in life is what every school fees paying parent wishes for their children, this trio and others have definitely made it. But the kind of education that students are getting from schools and universities today might not guarantee similar results. The education system seems bent on churning out graduates with great academic grades but without life skills.

Results from the recently released beginners Primary Leaving Examination (PLE) and the intermediary Uganda Certificate of Education (UCE) show more and more students scoring the top most grades, aggregate 4 and 8 and the majority pass in first grade. Makerere University and other higher institutions of learning are also increasingly getting high numbers of students getting First Class and Upper Second degrees. In the 2009 UCE exams 68 students of 16,279 who passed in division 1 scored top most aggregate 8 grade and 40 scored aggregate 9. In the just concluded graduation ceremony at Makerere University, 220 students graduated with First Class degrees.

The trend has been criticized. Teachers have been accused of shifting to coaching students to pass exams instead of creating students who can think and equiping them with tools to face the real world. To make their point, the critics point at graduates with top grades who have failed to earn a living.

Dr Fred Masazzi, the dean designate of Makerere University’s School of Education, wants the process of assessing students to be more encompassing and not focus only on the final national exams as the basis for grading and certifying that somebody has completed a particular level of education. He argues that there are many good things that the final exams do not examine.

“There is need to adopt a continuous assessment criterion in lower levels of education to assess the students’ abilities in sports, academics, art and craft, and other such areas that will help yield in a responsible citizen.”

He says academic papers without skills are not so useful in today’s world. “There is need to refocus our education system so that even if somebody stops at primary seven, S4 or S6, they have the skills to enable them gain a shilling. Many people have graduated even with First Class degrees but they are without something to do,” he said.

Prof. Aaron Mukwaya, a senior political science lecturer at Makerere University is concerned that the trend of scoring super grades in national exams has sparked competition in education sector which in turn has made education expensive. It has created classes of schools and students; those who pass with flying colours and the average students and average schools.

He says the education system has not significantly changed from that introduced by the colonialists who aimed at training white-collar workers as opposed to blue collar ones. He says this education only trains a person to achieve at individual level instead of national level as well. Students who pass highly get opportunities to join good academic institutions, local and abroad.

Mukwaya says parents who can afford struggle to have their children in the so-called good schools, leaving the poor parents to train their children from schools that are considered poor because they cannot make students pass national exams highly. He asks: Is this the education system we want as a country?

“Students are passing exams sometimes but with question marks on what they have learnt or what they have as knowledge. A school ought to give a student various ways of thinking,” he says, “Education in Uganda should be geared towards development by training people who can think and use their thinking ability to do many things. When you can think, you can sell your ideas, which involve creativity, innovations and a level of clout.” He said there have been cases where students have passed with good upper second class degrees but when called back to teach, they fail. You need to come to university with an open end not a closed end, he says.

Seasoned scholar Prof Senteza Kajubi says the choice of education a country emphasises defines the society it seeks to create. He says good education should stimulate the brain’s cognitive power, the ability to work with ones hands, and the heart’s ability to feel.

“This is what we call values. A well educated person ought to be able to use his head, hands and heart, to feel, to be sympathetic to society and uphold values; to have the courage to say an educated person does not do that.

“The press and parents look at the grades and begin to praise schools that did out-do the other in scooping grades. The question of values is greatly ignored today. This is why we have the outcry of corruption, when we go to elections, the question of falsifying votes emerges, all because the matter of values has been ignored,” says Kajubi.

“It is good to get first classes and grades but are they educative or are students spending more of their time on cramming regurgitating materials given to them. Unfortunately many of our schools and universities concentrate on pumping academic materials into the heads of students yet proper education would be drawing it out not pushing in.”

He laments that a student who can remember when John Speke reached the source of the Nile at Jinja is considered cleverer than the one who can make a chair. “As a result those who memorise dates and formulas are encouraged to go to high school, university, and get First Class and Upper Second degrees. Parents do not regard those that think with their hands as able. Our education system seems to have laid emphasis on training the brain to cram formulas.”

He says the third but important component in education is the heart to remember to do and to feel.

Citing Socrates, the famous classical Greek educator and philosopher who taught by asking questions, Kajubi criticises teachers who fail to draw out the students’ ideas.

“In many of our universities today you find teachers dictating notes. Yet students already have innate ideas that need to be explored,” he says, “Ideas which are received and not thrown in fresh combinations are like stale eggs. No matter how long mother hen will sit on them they will never hatch into chicks. We want to give students ideas which can hatch.”

“ At PLE level we tend to think that a pupil who scores aggregate 4 has passed and the other with 12 has not done so well but we forget that 12 makes First grade,” he says. He said the focus is bad because of competition to go to the so-called good schools makes all grades that these schools would not admit appear bad.

The trouble is worsened because the public examination board plays a qualifying and selecting role to the next level of education; O level results are used to select and qualify those to go to A level.

“Yet when I finished PLE, the certificate was a qualifying certificate and you would get employment with that, the same applied to secondary school certificates. But to go to schools like Makerere you had to sit for the Cambridge exam but to be admitted at Makerere you had to do the Makerere entry exams, meaning they were not looking for the crammed material you had garnered earlier on but your capacity to think. So the Makerere exams played only the selecting role while the other exams like one for Cambridge were for qualification. They tested whether you had the basics to begin Makerere.”

Dr Masazzi agrees. He says Uganda needs an education system where students after every level of education can meaningfully contribute to the development of this country. “After Primary school a child should be in position to have skills to use to live in this world and sustain themselves economically. The same should apply to secondary school level instead of studying up to college and university to be able to get employment or create employment,” said Masazzi.
Posted by williamkituuka.com at 12:34 AM