What makes one suspect that school fires are planned is how most of the time they take place when students are out of dormitories; and it ia always do 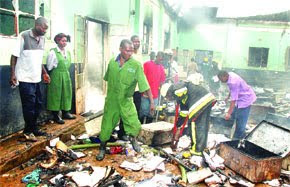 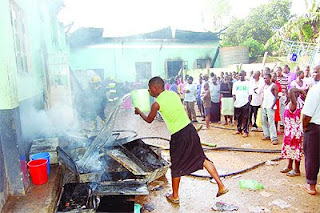 The school fires are most unfortunate. When we Budo children were burnt; it remained to find out who were the mature people there. According to some children evacuated; there were some mature people who helped them to safety, but it is not clear where the bodies of those who were burnt in the fire were taken; for some parents are witness to this.

It is unfortunate how children/students keep losing personal effects in these fire, later on have the parents to replace whatever is replaceable.

Fires are unfortunate. Whoever is behind them is simply playing a bad game if it can be called a game at all.

It started at about 7:00am when the residents - S1, S2 and S3 students - were in class, teacher Amos Kanabi said.

The cause of the fire is unknown, although the school authorities suspected a short circuit. By the time the Police Fire Brigade reached the scene at about 7:20am, the damage had already been done.

A student who saw the fire narrated: “I had remained in the dormitory because I am unwell. Moments after I had moved outside to brush my teeth, I heard a loud blast in the dormitory and later huge flames flared up.”

The fire spread quickly through the dormitory, incinerating all the property except that of S1 students which was saved.

“Preliminary investigations established that the partitioned dormitory was too congested, furnished with triple deck beds among other anomalies,” Nachuha said.

The block, which housed three dormitories, had 265 students.
Nachuha said the school had only three fire extinguishers, which she said were inadequate.

The headmaster, Jimmy Nyende, said the school would compensate all students whose property was destroyed by the fire.
Last evening, most of the victims had, however, been sent home for fresh supplies.

Fire outbreaks have in recent years hit schools hard, raising debate about how well-prepared schools are to handle the problem.

The problem became a national concern after the infamous inferno in April 2008 that gutted a dormitory at Budo Junior School, killing 20 pupils aged between eight and nine.
A number of other fires broke out elsewhere in the country.

The cause of the Budo fire and others across the country has not been established.

An alliance of lawyers, who carried out an independent investigation of the Budo fire, attributed the tragedy to an arsonist.

More than 36 schools have since been burnt. Seeta High School and Mariam High were some of the other victims.
Posted by williamkituuka.com at 6:10 AM