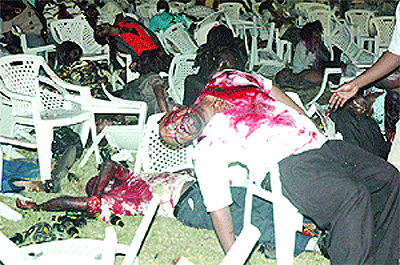 Bombs, school and market fires,poisoned liquor and human sacrifice all characterise what is going on as NRM sticks to power.
Just a few minutes to the end of the World Cup, it was unbelievable to hear on radio that at least 2 areas had bombs which killed as well as injured people. A few days I wrote about the possibility of getting attacks while on traffic jams by bad elements who are showing in Uganda.
It is sad to see Uganda a country where evil is currently the order of the day. The Government involvement in international politics like in Somalia among other areas can not be ruled out. Uganda is one country where all sorts of foreigners are having free movement and involved in all sorts of activity. Refugees who should be staying in restricted places are freely renting premises here and there and in as many schools without government showing concern! It is a worry that some of them may even be registered for elections in Uganda. The problem is greatly blamed on a system which has failed to see peaceful change of leadership at the top. We see people suffering greatly because of policies that the system has created. Never have people toiled so much for so little in monetary terms, unfortunately, all hope for a better tomorrow is out of the way when the leadership doesnot want to give way to others who can help the situation. For poor people, creation of new districts which means supporting of new administrative infrastructure induces more poverty to the people to see those developments a reality and all this is calculated as a means to get more votes for NRM so that they stay in power!
Given the frustration, those who have ventured into business and the businesses have not worked out, some of these could easily be behind the fires in markets. The competition in business as it looks like the only viable avenue to make some money, is so intense that it looks to be behind some of the evil being committed. For people so impoverished by policies of Government all the possible and impossible can be done by them to see that they can earn a living. It is no surprise that sacrifice of humans is on the increase. You get to learn of a person kidnapping anothe simply because of a promise of shs 200,000 on executing the service! If there is market for human organs, there must be a serious strategy by those in Government to counter such trade. In a country where a drug trafficker can be found with a diplomatic passport; it only shows how low the country has gone.
With so much frustration, Ugandans are likely to witness more as we enter the season for general elections. While change of Government is no guarantee for a better Uganda, chances are that there is need to combine effort to see an agreed road to change through peaceful means and a combined effort to see the country change for the better.

World Cup celebrations turn bloody as bombs hit Kampala
By Monitor Team
Posted Monday, July 12 2010 at 05:57
Kampala
Bombs went off across Kampala last night, killing at least 45 people – many of whom had been watching the World Cup final match.
Inspector General of Police Maj. Gen. Kale Kayihura told Daily Monitor last night that he could not rule out the al-Shabaab militia in Somalia being behind the attacks. “We have set up a team to carry out investigations to establish the cause and the explosives that were used,” Gen. Kayihura said. “The people who carried out the attack were targeting World Cup fans.” 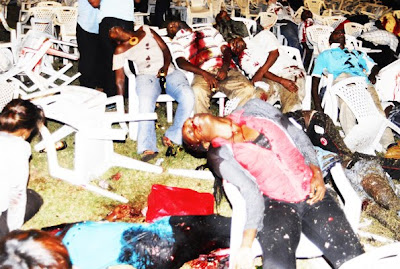 Related Stories
The first explosion ripped through the Ethiopian restaurant in Kabalagala at around 10pm, killing at least 13 people, many of them foreign nationals, and injuring several others. More than an hour later, an explosion ripped through a crowd of revellers at an open-air screening of the game at Kyadondo Rugby Club, setting off scenes of mayhem.
Less than a minute later, as the crowd scrambled for safety, another explosion went off, ripping through the sea of humanity. Police officers at the scene in Lugogo could not confirm the death toll at the scene. However, a Daily Monitor photojournalist counted 32 bodies at the scene.
What had earlier been a scene of joy and football celebration had been reduced to a theatre of death and destruction. White plastic chairs lay abandoned, save for about a dozen in the centre of the viewing area which remained occupied – by dead revellers, their lives ended abruptly, their bodies frozen in time. The angry sirens of police pick-up trucks and hospital ambulances filled the air as the dead and injured were ferried to the city mortuary and hospital respectively.
There were blood stains in the grass, amidst the abandoned bags and shoes and half-drunk bottles of beer. Klaus Sanga, who survived the blast at Lugogo, said: “There was blood all over. It was really scary. There was just running and screaming. It was really bad. I’d never expect something like this. I carried 15 people [to the ambulances].” Another survivor who declined to give his name added: “I was coming here because all my brothers are here. I came and stopped at Nakawa. I don’t know why; only God knows.”
Chaos amid casualties
There were chaotic scenes at Mulago, one of many hospitals where the injured and the dead were taken, with police officers asking bystanders to help take the dead and injured off the police pick-up trucks. At one point, the casualty unit, where the dead and injured were off-loaded from the trucks, got filled to capacity, prompting the police and the medics to temporarily put the bodies in a nearby store.
Many people, including survivors with blood-stained clothes kept turning up at the hospital late into the night, looking for information about their relatives and friends, forcing security operatives to close off the city mortuary.
Mr Fred Opolot, the Executive Director of the Government Media Centre confirmed three bomb blasts had gone off in Kabalagala and Kyaddondo. He said nothing in relation to those responsible for the blast could be confirmed immediately.
“We have had Al Shabab threats before, they could be initial suspects but at the moment, nobody can be ruled out,” he said. In January flights between Entebbe and Juba, the capital of South Sudan were temporarily halted after the United States government warned that “regional extremists” were planning an attack on aircraft on the route.
In October 2009, al Shabaab threatened to strike at Kampala and Bujumbura, the capital of Burundi, in retaliation for rocket attacks by peacekeeping forces in which about 30 people died in Mogadishu in Somalia.
“We shall make their people cry,” Sheikh Ali Mohamed Hussein, al Shabaab’s self-styled governor of Banadir region, which includes Mogadishu, said at the time. “We shall attack Bujumbura and Kampala ... We will move our fighting to those two cities and we shall destroy them.” The US government believes that al Shabaab’ has close links with al Qaeda.
Major Felix Kulayigye, the army spokesman, said at the time that the UPDF was aware of the extremists’ threat and was taking precautionary measures, adding that Uganda has been a constant target for extremists and the country is “always on alert” and there is no cause for alarm.
Burundi and Uganda both have about 2,500 peacekeepers in the Somali capital for the African Union’s Amisom peacekeeping force. The African Union last week agreed to send 2,000 more troops to the war-torn Horn of Africa.
In Mogadishu, Somalia’s capital, Sheik Yusuf Sheik Issa, an al Shabaab commander, told the Associated Press early Monday that he was happy with the attacks in Uganda. Mr. Issa refused to confirm or deny that al Shabaab was responsible for the bombings. “Uganda is one of our enemies,” he said. “Whatever makes them cry, makes us happy.’’
Reported by Andrew Bagala, Emmanuel Gyezaho, Stephen Otage, Isaac Kasamani, Richard Wanambwa, Joseph Kiggundu and Wandera W’Ouma.
Posted by williamkituuka.com at 11:33 PM