THE NAADS APPROACH THAT CAN DELIVER FOR UGANDANS

1. It should not identify with NRM in service delivery and in identifying beneficiaries. The impression given as of now is that these are NRM hand outs which is wrong;
2. Should have Demonstration gardens with various technologies that farmers can benefit from through a hands on approach – so that what they see and put their hands on in the demonstration garden is actually what they practice on their own gardens;
3. Should change from awarding benefits to a hand picked farmers many times those who are better off, but instead implement strategies that boost all those in agriculture wholesale;
4. Should help farmers to get necessary inputs on credit so that recovery is made after harvesting and selling;
5. Look to the revival of Farmers Cooperative groups at parish level then up to the apex cooperative organizations as opposed to SACCOs where many have registered terrible losses and a lot of incompetence more so given that they are politically driven;
6. Helping the marketing. It is not unusual to find farmers say those who grow coffee parting with a 20 litre container of dry coffee for shs 9,000 equivalent to about US $ 4.5! to the hawker type of buyers. This is robbery and many farmers have no options in market this type of crops as stores that would buy off the crop have been killed! 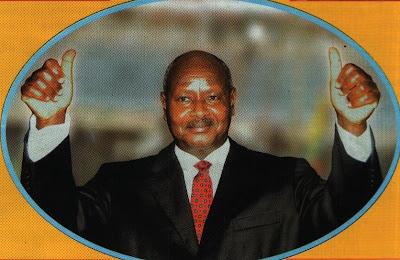 Museveni stops NAADS funds again - Source: http://www.sunrise.ug/news/top-stories/880-museveni-stops-naads-funds.html
Wednesday, 07 July 2010 08:00
President Yoweri Museveni has for the second time halted the release of the NAADS funds because of widespread complaints over mismanagement of its implementation, a statement from the President’s press office says.
Museveni says the Ushs 120 billion allocated to NAADS for this financial year will only be released after thorough scrutiny of the projects and current beneficiaries of the programme.
The President made the announcement while addressing a public rally at Boma grounds in Fort portal Municipality. He is in the western Rwenzori Sub-region district of Kabarole as part of his national tour to promote and popularize government’s Prosperity For All programme (PFA).
The programme implemented under NAADS is aimed at fighting household poverty through modern agricultural production and commercialization of agriculture to improve incomes.
The President’s announcement follows widespread complaints of financial impropriety, corruption, lack of transparency in farmer selection and the poor implementation of the US$108 million project in various districts.
In some of the districts affected by the civil strife, it was found that money was sent while the people were still in the camps and it disappeared and remained unaccounted for while in others, the cost of stocks including animals and poultry was inflated and prohibitive to the farmers. People also complained of lack of knowledge of the programme and lack of transparency in farmer selection.
They accused NAADS and district officials of benefiting themselves instead. The President has directed independent audits of farmer projects and value for money.
NAADS programme initiated under the NRM government has a vision for 25 years with seven years for its first phase covering the financial period 2001/2002 through to 2007/2008 at a cost of US$108 million. In the second phase funding is set to increase from US$108 million to US$460 million for the next five years.
The programme is funded by the government of Uganda, cooperating partners, participating local governments and participating farmers.
In October 2007, implementation of NAADS was suspended and only resumed in April 2008 after a cabinet review. The suspension was as a result of problems arising from poor procurement processes, lack of accountability, inadequate local government capacities and lack of political support at local government level.
The President said the measure to stop this year’s release will enable them review how the funds have been used and rectify the problems. He however said government will increase funding to the programme to ensure that more farmers benefit from the skills and training to help them engage in modern and commercial agriculture production.
The President urged the people to exploit the benefits from modern agricultural practices saying it’s the best way to tackle poverty especially in the rural areas.
He said infrastructure such as roads, electricity, water, health centres, education etc are the responsibility of government, adding that the basic requirement in for individuals to tackle household poverty.
“I don’t have a tarmac road in in Rwakitura or Kisozi nor do I have piped water but am not doing badly. Me and my neighbours are doing better than some people who have these things. Wealth is not in the roads or power but in your hands. For example I don’t go for holidays in Europe when I get some time, I just go to my farms in Rwakitura and Kisozi to look after my cows because that is where the wealth is. The cows have never refused to get on a truck to be transported to Kampala market because the roads are murrum,” he said.
The President also urged the people to guard against reckless behavior that may lead them to contract HIV/AIDS saying their lives are precious and need to be protected. He also called upon them to jealously guard the peace and security currently prevailing in the country and to educate their children, adding that government is working towards providing better infrastructure to facilitate their work.
Posted by williamkituuka.com at 5:20 AM