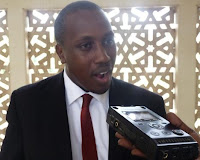 When I was working on St. Mary's College Kisubi Centenary Magazine, a young man also Old Boy of SMACK called on me from where I was working from, the name of the young man is Maurice Taremwa who was at Makerere University Faculty of Computing & Information Technology. Taremwa wanted financial assistance from St. Mary's College Kisubi Head teacher to boost Karuhanga's candidature. Gerald Karuhanga a 3rd year Law student then stood for Guild President at Makerere University. I was able to communicate the information to OB's of St. Mary's College Kisubi, and to my surprise, Karuhanga was voted Guild President in 2006. It is then that his star started shining.
William Kituuka Kiwanuka

KARUHANGA TABLES NEW EVIDENCE ON OIL BRIBERY
Posted by admin in Uncategorized
Western Uganda Youth MP Gerald Karuhanga brought more evidence showing how Foreign Affairs Minister Sam Kutesa allegedly picked bribe money in installments.
Karuhanga says he has a printout of the account held by Kutesa. He told Parliament that on different dates between June and July last year, East African Development Bank, in which Kutesa has shares, received money from Tullow Oil Uganda.
Earlier, Kutesa had dismissed the allegations as blatant lies and asked the house not to waste time carrying out investigations. The minister argued that while it’s okay to fight corruption, it should be done using correct methods and basing on facts or else the vice will be entrenched instead.
But according to Karuhanga, on 8 July 2010, the bank received 3.5 million Euros, followed by another 5 million Euros on 6 July. On 4, 10 and 21 June, the same bank got 500,000 Euros, 1.5 million Euros and 1.5 million Euros.
On Monday, MP Karuhanga overshadowed the whole debate on oil when he exposed details of bank accounts and huge amounts of money, in dollars and Euros, which were reportedly transferred to ministers Kutesa and Onek through their account numbers in foreign banks by Tullow Oil to get favors in the Oil dealings in Uganda.
Karuhanga said Kutesa received a bribe of 17.5 million Euros, an equivalent of about 68 billion shillings while Onek was reportedly given money in five different installments totaling to 5.6 million Euros, an equivalent of about 21.8 billion shillings.
Echoing what premier Amama Mbabazi had said earlier, Kutesa said the allegations are not new and as a whistle blower, Karuhanga ought to tell the truth.
Kutesa pointed out that he has never seen anyone count such colossal amounts. He questioned the kind of service he would have rendered to be awarded 17 million Euros.
The Speaker has adjourned the debate to 4:30 p.m. to allow MPs to get copies of the motion that was tabled by Theodore Sekikubo on Monday.
The motion is pushing for a moratorium on executing oil contracts to be put on the executive arm of government until proper laws are passed by Parliament.

The moratorium will also stop government from incurring further expenditure on oil revenue without the necessary laws. They are also demanding accountability for all revenues accrued so far from the oil industry, specifically the license fees charged, bonuses accrued, taxes and royalties.

As a matter of transparency, the MPs want government to join the Extractive Industries Transparency Initiative. They are also pushing government to put up a commission of inquiry to iron out the problems in the oil sector.

The inquiry should be headed by a judge of the Supreme Court with terms to investigate allegations that some government officials have been compromised and bribed by some players in the oil industry.