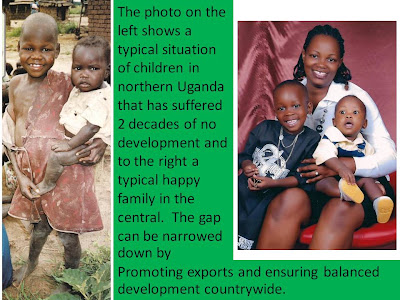 Our leaders are a spent force in front of the donors. They spend money on ill advised policies and the donors still bear with us and give us funding. You can look at the rate at which new districts are being created in Uganda. Reports are clean and clear of what is existing in the districts that are in place now and funding is abig problem and some want the graduated tax back, yet before abolishing the tax, Government first made sure that the would tax money was raised through increased taxes on some consumer goods but even then, the money according to the Local Governments is simply a drop in the ocean! What then motivates the President to keep on authorizing new districts? It is the politics because for him it is keeping in power that matters whether the people get services and at what cost, seems not to be the big issue. 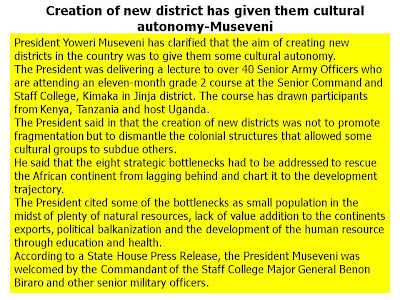 Our politicians and more so President Museveni ought to get his economics right. he will not keep on blaming Uganda's underdevelopment to past leaders. Given the 25 or so years in power, some other people would have turned around Uganda and could be on the line of donor countries as of now, but involvement in solving other people's problems at the expense of local development is regrettable. By this time, given the potential products that each part of the country can produce, more people would be happy producing for agro - processing industries, but where are they?
The areas that can be looked at among others include:
1. Fish farming as opposed to fishing in lakes etc,
2. Moringa oleifera growing for oil extraction and vitamin A supplement from leaves,
3. Growing plants that can boost Bio - fuels' production so as to get the power for running the agro - processing industries,
4. The growing of Lemon grass for a variety of products that can be extracted,
5. The growing of plants that are rich in Herbal Medicines 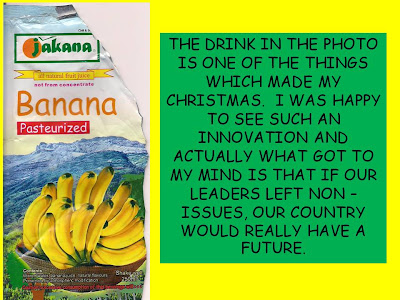 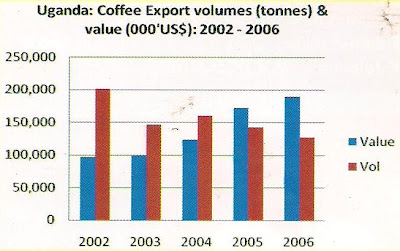 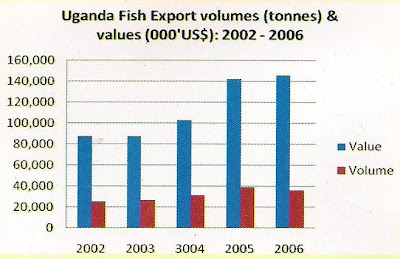 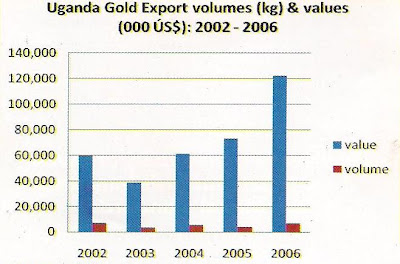 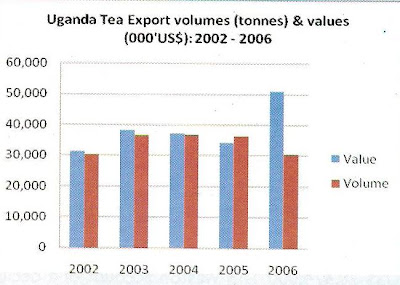 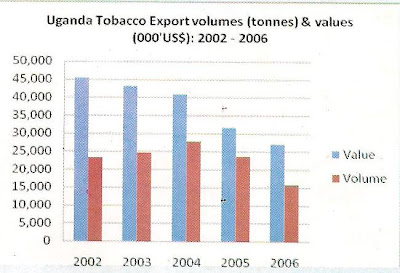 TOBACCO EARNINGS
Tobacco earnings continued to fall for the 3rd year running. Earnings fell 14% from US $ 31,486,000 to US $ 26,964,000. Tobacco volumes have been falling from 2004. A variety of factors locally are at play; including farmers abandoning the crop; also, BAT (U) Ltd, Uganda’s largest Tobacco processor, shifted some production capacity to Kenya due to electricity shortages. A global campaign against Tobacco is mounting pressure on its viability on the International market. 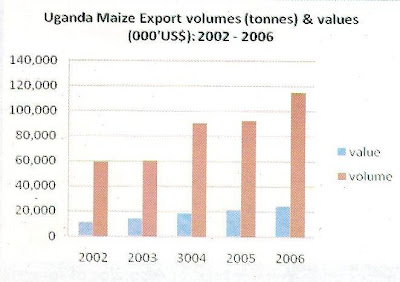 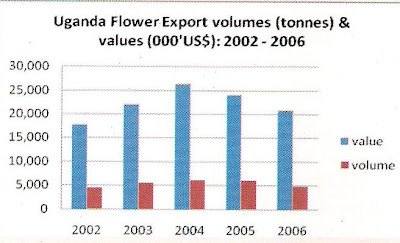 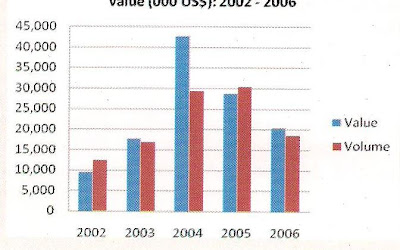 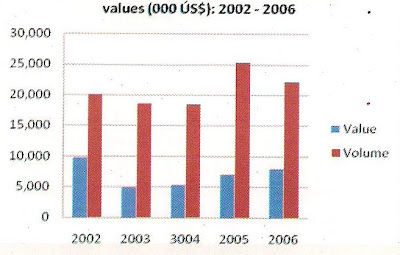 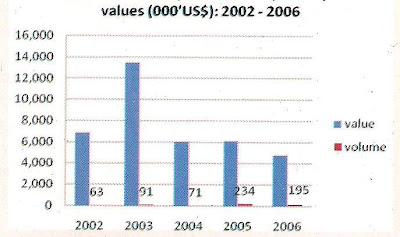 VANILLA EXPORTS
Vanilla Exports fell 22% from 2005 levels, to US $ 4,808,000. In 2006, the recovery of Madagascar’s crop coupled with alternative synthetic vanillin on the global market continued to depress vanilla prices on the world market 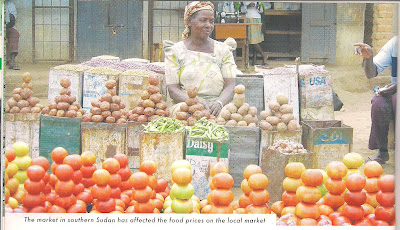 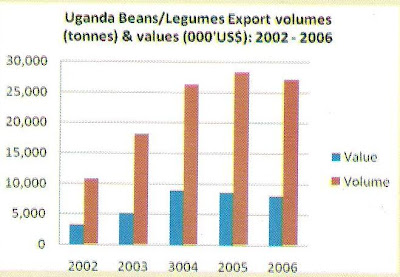 LEGUME PRODUCTION
In general, Legume production, fruits and other food crops suffered due to drought conditions in 2006. The most visible symptoms of the drought was the most obvious fall in Lake Victoria’s water levels (this hurt the power generation capacity which in turn hurt industrial production), there is a decrease in planted acreage too. 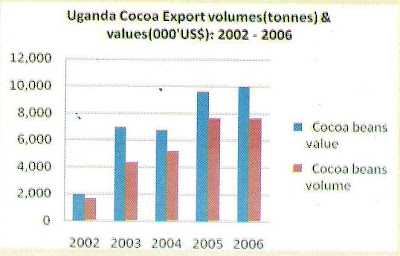 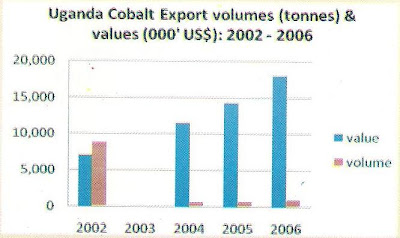 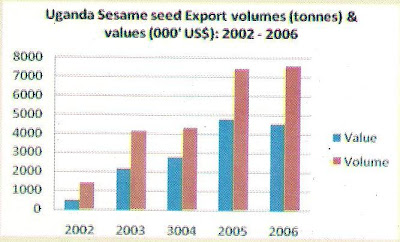 SESAME EXPORT
Sesame Export volumes remained largely unchanged in the year 2006, at 7,500 tonnes, while in the same year, export values slightly declined from previous year’s levels, at US $ 4.5 million.

HOW CAN UGANDA ESCAPE FROM THE LEAST DEVELOPED STATUS
SOURCE: http://www.kashambuzi.com/blog/3-all/429-how-uganda-can-escape-from-least-developed-status.html
Written by Eric Kashambuzi on 2010-08-24 08:56

As Uganda transitions from structural adjustment (SAPs) to national planning development based on public-private partnership, a fresh non-ideological assessment of Uganda’s economy, society and ecology needs to be undertaken in a transparent and participatory manner. Ugandans of all backgrounds need to be fully engaged because they have a lot to offer. They need to be heard, not lectured to. Ugandans have a wealth of undocumented information and experience. They have witnessed many economic, social, cultural and ecological changes in their communities. For these reasons they have developed definitions which differ in some cases from the classic cases.

The definition of poverty, for example, goes beyond the classic income poverty. To the income and material poverty they have added absence of social support systems that represent a feeling of isolation and exclusion, helplessness, insecurity and deprivation of basic human rights together with a feeling of voicelessness to influence conditions around them. Therefore pro-poor policies, strategies and programs need to go beyond standard definition based on income alone.

Conversations with farmers on the challenges they face have emphasized drought and increasingly floods, food losses and low purchasing power. These concerns are confirmed in official reports.

The impact of drought on agricultural exports, food security and quality of life has appeared regularly in colonial and post-colonial reports. For example cash crop production declined from 20 percent in 1999 to (minus) – 2.8 percent in 2000 due largely to prolonged drought. At a meeting of NGOs held in New York in June 2010 in preparation for the September 2010 Summit on the MDGs, a participant from eastern Uganda explained graphically how drought has devastated agricultural production, contributed to hunger, low incomes and driven residents deeper into absolute poverty.

While access to adequate land, credit facilities, extension services and market information are important, water management stands out as the single most significant factor for urgent attention. In a country where agriculture is overwhelmingly small scale, irrigation facilities through small dams need to be provided and maintained properly paying special attention to silting problems. This job cannot be left to market forces and individual initiatives alone. A public-private approach is more appropriate with adequate funding, monitoring and evaluation for positive outcomes.

Farmers have also underscored food losses before and after harvest as a major constraint in their efforts to lift themselves out of the poverty trap. Food losses are particularly high for perishable commodities such as bananas, milk and horticultural produce including fruits and vegetables. Farmers have singled out provision of cold storage and agro-processing facilities as pre-requisites to ending losses. Besides, reducing food losses, agro-processing has a further advantage of adding value and increasing household incomes.

Although industrialization has been talked about since the end of the Second World War in 1945, very little has taken place. This is due to Uganda’s continued emphasis on a classical colonial economy founded on the export of agricultural commodities which received a boost under structural adjustment. The little manufacturing that has occurred has suffered extreme fluctuations from various causes. By way of illustration, according to the 2000 Development Cooperation report the manufacturing sector declined from 12.4 percent in 1998/99 to 1.2 percent in 1999/00. This deplorable performance was caused in large part by the worsening terms of trade which constrained the import of necessary inputs.

Without making a concerted effort and move away from static comparative advantage that has defined Uganda’s economic structure since colonial times to a manufacturing sector with emphasis initially on agro-processing, Uganda will likely remain least developed for a long time. No country in the world has attained the developed status without engaging in full-scale industrialization. Those industrialized countries which had shifted to services are reverting to manufacturing to address the challenges of the 21st century including unemployment, with state intervention as and when necessary.

Societies that are trapped in poverty and hunger like Uganda’s have a propensity for high fertility and a low utilization of contraception. Therefore the development and implementation of pro-poor policies and programs combined with education of girl’ beyond primary level and empowering of women to control their reproduction will go a long way in promoting Uganda’s graduation from the least developed category. The next government should pledge to end Uganda’s least developed status within ten years. With sufficient political will it can be done.

PRESIDENT CALLS FOR AGRO-PROCESSING INVESTMENT
Source: http://www.statehouse.go.ug/news.php?catId=1&item=311
14 - 8 - 2008
The President emphasizes investors all the time. we need to look at Ugandans being funded by Government to have their investments a success, and this is a Government obligation. Government MUST get the money to bail Ugandans to this.
William Kituuka Kiwanuka

President Yoweri Museveni urged foreign investors to tap into the abundant opportunities in the agro-processing sector in Uganda. The President made the call at State House, Entebbe during a meeting he held with a delegation of officials from the US-based Global Environment Fund. The delegation was led by organisation’s Managing Partner Ms. Judith McHale. President Museveni assured his visitors that financial returns in Uganda are very high because the country offers big investment opportunities. He urged the delegation to invest in fruit processing because the country commands sufficient fruit production.
Mr. Museveni informed them that Uganda has access to tax and quote free markets in the United States of America, the European Union, India and China. He revealed that government has identified strategic economic activities in the coffee, tea, cotton, fish, milk, beef, horticulture, tourism and information technology as key investment areas. He told them that Uganda is proud of its track record of organic products to which he urged investors to come and take advantage of through establishing business concerns in the country.
Ms. McHale reported that her organization has earmarked US$150 million for investment in order to boost companies that are already in operation in Uganda. She said that the objective is to provide those companies with the necessary expertise so that they contribute to the enhancement of local enterprises.
Ms. McHale expressed interest in the agro-processing, financial services, construction and logistic and transportation sectors in Uganda. Finance Minister, Dr. Ezra Suruma, of Lands, Housing and Urban Development Mr. Omara Atubo and that of Trade and Industry Hajati Janat Mukwaya, attended the meeting.
Posted by williamkituuka.com at 3:40 AM