ONLY IF THERE IS SPECIAL MAGIC, PRESIDENT MUSEVENI WILL NOT GET OVER 50% 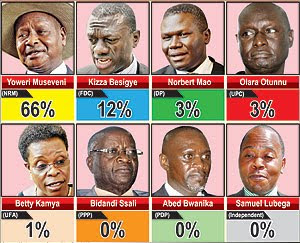 ONLY IF THERE IS SPECIAL MAGIC, PRESIDENT MUSEVENI WILL NOT GET OVER 50%
President Museveni scored 75.5 percent in 1996 Presidential poll, 69 percent in 2001 and 59.3 percent in 2006,the trend will simply fall further this time. No miracle can make it better more over, if the cheating tactics used by the NRM are better fixed, the best he may score may be about 46%, and chances are that this may also not be that possible in which case, we should be ready for a re - run.

WHAT I WOULD PRAY TO GOD IF MUSEVENI LEFT PEACEFULLY ON LOSING THE 2011 ELECTION
It is true that President Museveni has been able to stay so long in power (25 years) due mostly to scheming. And, definitely, much of such scheming cannot be Godly. However, in the event that he lost the forthcoming election which is most likely the case, and he does not give Ugandans more headache, but leaves office peacefully, unlike the case in Ivory Coast, my prayer then will be that the Almighty God forgives him his sins.
William Kituuka Kiwanuka

MUSEVENI LEADS WITH 66% - POLL
Thursday, 16th December, 2010
By Barbara Among
IF Ugandans were to vote today, President Yoweri Museveni would win with 66% of the vote, while FDC chief Kizza Besigye would come second with 12%, according to a poll.
The winner needs only 51%, according to the Constitution.
Commissioned by donors and conducted between November 16 and December 6, the poll says DP leader Norbert Mao and UPC candidate Olara Otunnu would each get 3%.
Beti Kamya, on the other hand, would get 1%.
The rest of the candidates, Abed Bwanika, Bidandi Ssali and Samuel Lubega, would get zero percent each.
Afrobarometer, which carried out the poll, specialises in surveys on democracy and governance in Africa.
The group operates in 16 countries across west, east and southern Africa.
This is its fourth round of survey in Uganda; the first was in 2002.
In the survey, Ugandans said they would vote for Museveni because of his personality, leadership skills, and the ability to deliver on jobs and development. Only 2% said they would vote for him because he belongs to their ethnic group.
The poll, however, shows several surprises that are bound to shake some long-held ideas about regional and demographic voting patterns, as well as where the patterns, as well as where the strengths of various candidates and political parties lie.
For instance, the ruling National Resistance Movement party has gained support across the country, including the eastern and northern regions, where Museveni performed poorly in the 2006 elections. In the central the poll gave Museveni 59% of the vote, 83% in the west, 59% in the north and 64% in the east. This is about 20% gain for Museveni in the north.
Surprisingly, his two-time rival, Besigye, who beat him in the east and north in 2006, has only 11% in north and 13% in the east. In the central, where political analysts expected him to do well, he scored 12%.
Even in Kampala, where Besigye beat Museveni in the previous election, he has only 15% against Museveni’s 44%.
The poll was released in Kampala by the Afrobarometer at the offices of the Deepening Democracy Group, which commissioned it.
It said Mao would only manage 8% in the central, zero in the west, 2% in the north and 1% in the east.
Otunnu, it added, would not get any votes from the central and west and only get 1% in the east and 11% in the north.
Kamya would score 2% from the west and central and 1% from each of the other regions.
The poll also said 3% of the 2,000 voters interviewed were not sure who to vote for.
Asked which party they liked most, 72% chose NRM, 28% picked FDC, while 15% said they would go for UPC.
Some 38% said they disliked FDC, UPC and DP. The same percentage said they were neutral.
Most of the people interviewed attributed their dislike for the parties to their past experiences, unrealistic promises, inexperience and perceived tribalism.
A poll conducted from June 21 to July 23 by New Vision showed that 52.72% of Ugandans at the time would vote for President Museveni.
The Forum for Democartic Change leader, Col. Dr. Kizza Besigye, came second with 16.06%. The DP boss, Norbert Mao, got 5.41%, followed by Olara Otunnu of the UPC with 3.14% and Bidandi Ssali of the People’s Progressive Party got 1%.

Other issues in the survey
Ugandans want the next President to address health, education, corruption and unemployment.
Although it found out that 90% of Ugandans would vote, 59% feared post-election violence, while 73% of the respondents predicted that the loser would concede defeat.
It showed that the presidency was the most trusted institution with 68%, followed by the courts at 61%, though this is a decline from 71% in 2005. The Police is the least trusted institution in the country, the survey showed.
Ugandans, however, feel that the current government has failed to end corruption and provide jobs.
While 53% of the respondents said the existing electoral laws were sufficient to deliver free and fair elections, only 47% said they trusted the Electoral Commission to deliver.
The good news for the Electoral Commission chairman Badru Kiggudu, is that 53% of Ugandans said he was doing a good job.
The opposition has on several occasion demanded his resignation, alleging that he is incompetent.
On public awareness, the poll said about 50% of Ugandans knew that the elections are due on February 18 and could name two or more presidential candidates. 58% of the respondents said they had attended campaign rallies.
While 90% said they felt free to vote for a candidate of their choice, 63% said they are not free to comment on political issues.
On vote buying, the NRM party came first, followed by the FDC. Respondents said the parties had offered them money, household items, alcohol and job promises. Despite this, 77% said they would take the money but vote for a candidate of their choice.
The survey also assesed the impact of recent events across the country on the NRM chances of re-election. On the reopening of CBS, only 30% said it would impact positively on the outcome of the vote.
The Government closed the Buganda kingdom radio station in September 2009, accusing it of inciting violence. It re-opened it last month.
On the disputed NRM primaries, 33% of respondents said it would negatively impact on the party.

How survey was done
The survey involved 2000 adult Ugandans in 71% of 112 districts, or 79 districts.
It lasted for 19 days between November 18 and December 6.
Areas, households and individuals were selected randomly.
It used face to face interviews in the language of the respondent’s choice. These were Luganda, Runyankole-Rukiga, Runyoro-Rutooro, Lugbara, Alur, Luo, Ateso, Akirimojong and Lumasaba.
The age of the respondents ranged from 18 to 75 years. Half were male and the other female selected from both urban (14%) and rural (86%) areas.
Overall margin of error is +/- 2.5

Now Museveni Faces Toughest Race Ever in his 2011 Bid for Presidency
Source: http://allafrica.com/stories/201011010524.html
Julius Barigaba
1 November 2010
Analysis
The political season in Uganda has kicked off in earnest, following the nomination of eight candidates to contest next year’s presidential election.
Political actors say the election is a stern test of Buganda Kingdom’s resolve to break ties with the current regime and chart its own future.
Therefore, on paper, this promises to be the most difficult race for President Yoweri Museveni’s career, which has long piggybacked on Buganda.

Among other contenders, Museveni (National Resistance Movement) goes head to head for the third time with his nemesis — the explosive Kiiza Besigye, his erstwhile physician, confidant and Cabinet minister.

Dr Besigye is the flagbearer for the Inter Party Co-operation, an alliance of his Forum for Democratic Change and other smaller parties. Significantly, however, Besigye and the IPC have struck a deal with Suubi 2011, an influential pressure group that champions pro-Buganda interests.

Suubi factor
Mainly, Suubi is mobilised around the introduction of a federal system of governance, compensation and return of the Kingdom’s properties as well as end to the excesses of the current regime like corruption, human-rights abuses and inhibition of freedoms.
Suubi co-ordinator Medard Lubega Sseggona says: “Buganda has always kept this man in power, but we are now doing our best to see that he loses the Buganda vote. Our game plan is simple. We will concentrate on issues that hurt people in this country.”
A sign of IPC-Suubi influence was revealed recently after the signing of an accord between the two. Among other things, the agreement specified “the unconditional reopening of CBS”— the radio station with close links to the Kingdom that was closed on September 10 last year.
As soon as Museveni learnt of this move, he pushed the panic button and issued orders that the station be reopened.
“This only convinces us that Museveni realised he had a lot to lose... but it still doesn’t save him; in fact it recharges our batteries to work and know that he can be defeated,” says Mr Sseggona.
Museveni also faces tricky new contenders in UN former undersecretary Olara Otunnu (Uganda Peoples Congress), his former Cabinet minister Jaberi Bidandi Ssali (People’s Progressive Party) and Democratic Party leader Norbert Mao, three candidates each with a different appeal to the voters.
In addition to Besigye, these three pose the biggest threat to eat into Museveni’s support. The other candidates—Dr Abed Bwanika (Peoples Development Party) and Beti Kamya of Uganda Federal Alliance — the only woman in the race — and independent Sam Lubega remain rank outsiders.
In an interview with Uganda Broadcasting Corporation shortly after nomination, Museveni was asked how he intends to relax during this gruelling campaign, to which he quipped, “Unfortunately I have not relaxed for the past 40 years.” Indeed, Museveni cannot afford to rest.
Museveni and his party will have to work harder and steal more votes than ever before to capture these regions.
While the end of the war in the north — also home to DP’s Mao and UPC’s president Otunnu, whose parties ceded their support to Bisigye in the past two elections— might earn Museveni a few more votes, analysts doubt this will be sufficient to counter the numbers lost in Buganda.
Posted by williamkituuka.com at 12:56 AM