IS THERE A TIME WHEN MUSEVENI WILL BE A FORMER PRESIDENT?

IS THERE A TIME WHEN MUSEVENI WILL BE A FORMER PRESIDENT?
I long for a time when President Museveni will be a former President of Uganda. When i see what is going on, all I have to say is that Uganda is unfortunate. While countries are registering positive growth, in Uganda we are simply wasting time and driving in reverse gear. God help us out!
William Kituuka Kiwanuka
Museveni vows to arrest Besigye 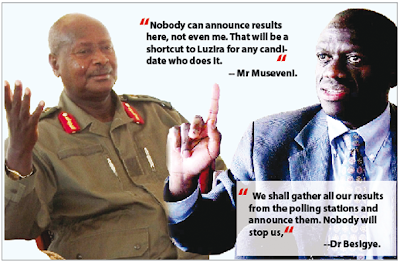 Dr Kizza Besigye will be arrested if he declares his own set of results for next year’s presidential election, President Museveni warned yesterday.

The President also described Dr Kizza Besigye, who is running against him in a third consecutive race, as a “comedian” on account of his defiant promise to announce his version of results. “It is just comedy; no one should take him serious,” Mr Museveni said at a press conference in Jinja where he was ending his campaigns in Busoga sub-region.

“Uganda is not Ivory Coast, It is not Kenya. Don’t expect what is happening or happened in these countries to happen here. Uganda is a country led by people who have fought wars. You can’t play that game here. He may have his computers but the only institution charged with announcing electoral results is the national Electoral Commission.” “Nobody can announce results here, not even me. That will be a short cut to Luzira for any candidate who does that.”
Ivory Coast, which is on the brink of repeat civil war after a December 6 election held in the hope of uniting the country divided since disputed elections in 2002, finds itself again facing a similar situation. The incumbent, Laurent Gbagbo, is clinging onto power even when the national electoral body has announced that he was defeated by Alassane Ouattara.
Uganda’s eastern neighbour, Kenya, slipped into an orgy of tribal bloodletting which left more than 1,500 people dead and thousands displaced following the disputed 2007 election.
Current Kenyan Prime Minister Raila Odinga believed he had won only for the polls’ body to reportedly alter the result in favour of incumbent Mwai Kibaki. The ensuing chaos disrupted supplies of fuel and other vital commodities which are imported into most Great Lakes region countries including Uganda through Kenya.
‘Comic figure’
But Mr Museveni said “Besigye is a comic figure”, who “in 2001 said 91 per cent of the military supported him.” “Within a short time the same Besigye was taken to Luzira. Why didn’t the army help him survive going to jail. Recently, in 2006 he promised the country will experience a ‘political tsunami, what has happened? ” he asked.
The contention about results has been gathering wind with Dr Besigye, leader of the FDC, but running as the four-party alliance Inter-Party Cooperation candidate, maintaining that he will not be cheated again.
On December 6, on a talkshow broadcast over Rock Mambo Radio FM in Tororo, Dr Besigye said: “An election is done and either won or lost at the polling station. If voting is done at the polling station and the counting is done at the polling station, then the results are declared at the polling station.” He refused to accept EC chairperson Badru Kiggundu’s urging “that nobody is supposed to announce any results”.
“This is nonsense. We shall gather all our results from the polling stations and announce them. Nobody will stop us,” Dr Besigye vowed. “Voters’ worries are justified because twice we have been robbed of our victory. NRM recently could not even spare their own [primaries] vote, they rigged.”
Last evening, IPC spokesperson Margaret Wokuri said “President Museveni is not the law … He is trying to intimidate Besigye but we are not moved at all because these are empty threats.” “Like Dr Besigye said, the plan [to establish our tally centre] is there and it is not a secret. We shall establish our own tally centre and announce our own results as soon as they are officially announced at the various [polling stations]. Our polling agents will liaise with those at the tallying centres to get the results and the information will be automatic so that we know where we have won and where we have lost,” Ms Wokuri said.
What law says
She said the law does not bar them from announcing provisional results. The EC chairperson recently clarified that the opposition are free to set up their own tally centres as long as they state clearly that they are releasing provisional and not final results. The Constitution gives the EC official mandate to declare final results.
Commenting on the President’s language, EC spokesman Charles Ochola said it was true the law prohibits candidates from using inflammatory, insulting or derogatory language in reference to opponents. “That is what you are reporting to us but we don’t know whether it is true or the President is being quoted out of context. Only when you put it in writing shall we give a position of the commission,” Mr Ochola said.
NRM spokesperson Mary Karooro Okurut said she did not want to comment on the matter but as a student of Literature and the English language, “I don’t see anything abusive with what he (President) said.” “If somebody says I am a comedian, how insulting is that? If he had said the man is stupid, that would be understandable,” she said. Dr Besigye was Mr Museveni’s main challenger in the 2001 and 2006 polls which he claims to have won but was robbed of victory by the NRM.
In 2006, the Supreme Court found poll irregularities but ruled they could not have changed the results.Mr Museveni got 59.2 per cent of the votes while Dr Besigye got 37. 3 per cent.
Additional reporting by Mercy Nalugo & Emmanuel Mulondo
Posted by williamkituuka.com at 2:46 AM