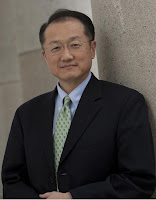 The Executive Directors met to select a new President of the World Bank Group. The Board expressed its deep gratitude for Mr. Robert B. Zoellick’s outstanding leadership and his dedication to reducing poverty in its member countries, the core mandate of the World Bank Group. The Executive Directors followed the new selection process agreed in 2011 which, for the first time in the Bank’s history, yielded multiple nominees. This process included an open nomination where any national of the Bank’s membership could be proposed by any Executive Director or Governor, publication of the names of the candidates, interviews of the candidates by the Executive Directors, and final selection of the President. The Executive Directors selected Dr. Jim Yong Kim as President for a five-year term beginning on July 1, 2012. The President is Chair of the Boards of Directors of the International Bank for Reconstruction and Development (IBRD) and the International Development Association (IDA). The President is also ex officio Chair of the Boards of Directors of the International Finance Corporation (IFC), the Multilateral Investment Guarantee Agency (MIGA), and the Administrative Council of the International Centre for Settlement of Investment Disputes (ICSID).
We, the Executive Directors, wish to express our deep appreciation to all the nominees, Jim Yong Kim, José Antonio Ocampo and Ngozi Okonjo-Iweala. Their candidacies enriched the discussion of the role of the President and of the World Bank Group’s future direction. The final nominees received support from different member countries, which reflected the high caliber of the candidates. We all look forward to working with Dr. Kim when he assumes his responsibilities. Dr. Jim Yong Kim is currently President of Dartmouth College. A U.S. national, Dr. Kim is a co-founder of Partners in Health (PIH) and a former director of the Department of HIV/AIDS at the World Health Organization (WHO). Before assuming the Dartmouth presidency, Dr. Kim held professorships at Harvard Medical School and the Harvard School of Public Health. He also served as chair of the
Department of Global Health and Social Medicine at Harvard Medical School, chief of the Division of Global Health Equity at Brigham and Women’s Hospital, and director of the François Xavier Bagnoud Center for Health and Human Rights at the Harvard School of Public Health.
Dr. Kim was awarded a MacArthur “Genius” Fellowship (2003), was named one of America’s “25 Best Leaders” by US News & World Report (2005), and was selected as one of TIME magazine’s “100 Most Influential People in the World” (2006). He was elected in 2004 to the Institute of Medicine of the National Academy of Sciences—one of the highest honors in the fields of health and medicine—for his professional achievements and commitment to service. He has published widely over the past two decades, authoring or co-authoring articles for leading academic and scientific journals, including the New England Journal of Medicine, Lancet, and Science. Born in 1959 in Seoul, South Korea, Dr. Kim moved with his family to the United States at the age of five and grew up in Muscatine, Iowa. Dr. Kim graduated magna cum laude from Brown University in 1982. He earned a medical doctorate from Harvard Medical School in 1991 and a Ph.D. in anthropology from Harvard University in 1993. He is married to Dr. Younsook Lim, a pediatrician. The couple has two young sons.

THE STATEMENT FROM DR. JIM YONG KIM REGARDING HIS SELECTION BY THE WORLD BANK'S EXECUTIVE DIRECTORS AS 12th PRESIDENT OF THE WORLD BANK.
WASHINGTON, April 16, 2012 - Dr. Jim Yong Kim today released a statement in response to his selection by the World Bank's Executive Directors as 12th President of the World Bank:
“I am honored to accept the Executive Directors’ decision to select me as the next President of the World Bank Group. I am delighted to succeed Robert Zoellick, who has served with excellence and distinction during the last five years, and I am grateful to the Bank’s member countries for the broad support I have received.
I have spoken with Minister Okonjo-Iweala and Professor Ocampo. They have both made important contributions to economic development, and I look forward to drawing on their expertise in the years to come.
It is befitting that I conclude my global listening tour in Peru. It was here in the shantytowns of Lima that I learned how injustice and indignity may conspire to destroy the lives and hopes of the poor. It was here that I saw how communities struggle to prosper because of a lack of infrastructure and basic services. It was here that I learned that we must raise our sights to match the aspirations of those most excluded. And it was here that I learned that we can triumph over adversity by empowering the poor and focusing on results.
As President, I will seek a new alignment of the World Bank Group with a rapidly changing world. Together, with partners old and new, we will foster an institution that responds effectively to the needs of its diverse clients and donors; delivers more powerful results to support sustained growth; prioritizes evidence-based solutions over ideology; amplifies the voices of developing countries; and draws on the expertise and experience of the people we serve.
My discussions with the Board and member countries point to a global consensus around the importance of inclusive growth. We are closer than ever to achieving the mission inscribed at the entrance of the World Bank - “Our Dream is a World Free of Poverty.” The power of this mission is matched by the talent of the World Bank Group staff. May this shared mission embolden our efforts to end the disparities which too often diminish our shared humanity. Let us work together to provide every woman and man with the opportunity to determine their own future.”
Posted by williamkituuka.com at 11:52 PM