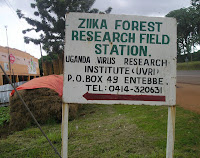 Ziika forest is among the smallest central forest reserve that is situated along Entebbe-Kampala highway. The forest is under the management of the communities around with help from UNDP and GEF. It is one of the Grey Parrots breeding sites known in Uganda. A breeding ground for butterflies has also been established at the site. To ease nature walks in the forest, a variety of trails have been established. This has been complimented by construction of the scenery/bird viewing tower. A spell at the Ziika Forest will leave you breathless, a quiet kind of place, home to red tailed and grivet monkeys, lots of trees, butterflies and birds. 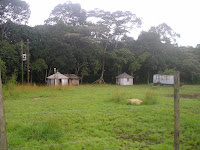 Dranzoa, C. 1997. The survival of under storey birds in the Tropical Rainforest of Ziika. Ostrich 68 (2–4): 68–71.
The forests at the shores of Lake Victoria had considerable attention from researchers during the 1970s. Ziika forest is one of the many small forest fragments that fringe the northern part of the lake. This 12 ha forest is surrounded by different habitats, giving it the appearance of a terrestrial ‘island’. Birds were first ringed here from September 1970-July 1972. A follow-up was made in 1988–89, during which 186 birds from 27 different species were ringed. Five years later, survival rates were found to be significantly higher than the expected. Some species appeared to survive better than others. There are various assumptions made in estimating survival rates of under storey birds.

.
Posted by williamkituuka.com at 7:12 AM