MDOE THE GREAT EDUCATIONIST HAS DEPARTED THIS WORLD 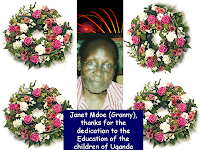 The news of the death of Janet Nsibirwa Mdoe is very sad. Those of us who are concerned about the better health of the education sector in Uganda see this as a big blow. However, we are grateful to God for the life He gave to Mdoe and her contribution. Those who have passed through her hands have indeed greater testimony. May the almighty God grant Mdoe the much deserved eternal peace.
William Kituuka Kiwanuka
"The first years of Greenhill Academy were of hard work. The Late Mrs Wambuzi and Mrs Mdoe had to perform two things. Besides recruiting children and instilling in them a desirable culture, they had to work hard to train teachers and inculcate in them a system in terms of preparation, teaching and many other areas relevant to the profession," D. Olei - Maths teacher
Source: GreenHill Academy Magazine - Issue 2004
Dr. IAN CLARKE ABOUT JANET MDOE
I was invited to a birthday party — not that of a child, but a party to celebrate someone’s 90th birthday. The name of the birthday girl was Janet Nsibirwa Mdoe, born in 1920.
Janet has witnessed more changes than most during her long life, having been born long before independence, brought up under the British, survived through the dictatorship of Amin and retired during the instability of Obote II.
In her early childhood, her father insisted that the girls in the family were educated, which was unusually progressive for the 1930s, when money spent on educating girls was considered a waste.
But her father Martin Luther Nsibirwa was a progressive man, holding the position of Katikkiro of Buganda from 1929 to 1941. Almost a century later, Janet attributes much of her own success to her father’s foresight in ensuring that she was educated, plus instilling in her a passion for teaching and education itself.
As a result, she trained as a teacher and later benefited from a programme run under the colonial government, where Ugandan teachers were sent to Stranmillis College, a teacher training college in Northern Ireland. Co-incidentally my own sister was trained as a teacher at this very college and I remember the time when Ugandan students were a regular fixture in Belfast. Unfortunately, the whole programme became a casualty under Idi Amin.
Janet witnessed the birth of the Ugandan nation while she was a teacher and then went on to carry out further teacher training in Australia, a journey, which in those days took four days. Her father was assassinated at the entrance of Namirembe Cathedral in 1945 and her husband also died many years ago, but the constant in her life was teaching and education. She reached pensionable age and retired from teaching in the government sector in the early 80s, but she never lost her love for children nor education.
When political stability returned to the country there were opportunities for the establishment of new private schools and Janet harboured the ambition to start a school, but at this point in her life she was over 70 years old. But age had not diminished her enthusiasm, her sense of humour nor her love for children and wisely she neither felt nor acted her age.
When she was 74 she and her sister became the founder members of the now famous ‘Greenhill Academy’. They only had a small number of pupils to start with, but from small beginnings the school has grown over the past 16 years to be one of the foremost educational establishments in Uganda, with an enrolment of two and a half thousand students.
Janet’s story is inspiring, not only in what she has seen and survived during her long life, but because her most significant achievement has been when she was in her 80th decade.
She demonstrates that if one has the right spirit, it is never too late to start. Henry Ford put his first production line of the model T Ford into operation when he was 50 years. Jimmy Carter has made his most significant contribution to the world, not while he was president, but as an elder statesman. Warren Buffet is in his 70s and his respected than when he was in his ‘prime’.
Janet is blessed with good health and wrote and presented her own speech at the birthday party in which she demonstrated her active mind and wry sense of humour.
There were hundreds of people to honour her, because of what she represents — perseverance, work ethic, right values, self-deprecation, vision and a successful life lived honourably.
As I looked around the people there — her younger sister Rhoda Kalema, her son Tendo and daughter Joy, I saw people who espouse the same values that Janet has lived by and her father instilled in the family all those years ago.
It is rare nowadays to celebrate true excellence and attainment as the result of commitment and hard work and even rarer to find someone who has the courage to believe in her vision at 74 years. Now Janet can look back with satisfaction on her legacy and we can all take pleasure in celebrating with her.