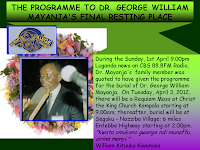 With what a deep devotedness of woe
I wept thy absence - o'er and o'er again
Thinking of thee, still thee, till thought grew pain,
And memory, like a drop that, night and day,
Falls cold and ceaseless, wore my heart away! ~ Thomas Moore

And this is the will of him who sent me that I shall lose none of all that he has given me, but raise them up at the last day. For my Father's will is that everyone who looks to the Son and believes in him shall have eternal life, and I will raise him up at the last day. ~ John 6:39-40
"God, give strength to the family members of Dr. George William Mayanja so that they can stand during this trying time of the loss of the Doctor."
"Doctor George William Mayanja Weraaba."

William Kituuka Kiwanuka
Fellow Lourdelian and friend.
Posted by williamkituuka.com at 5:59 AM