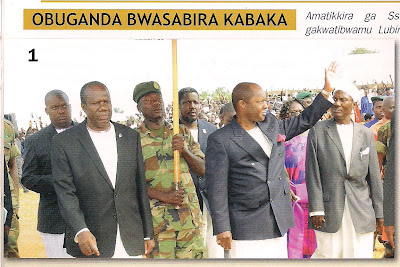 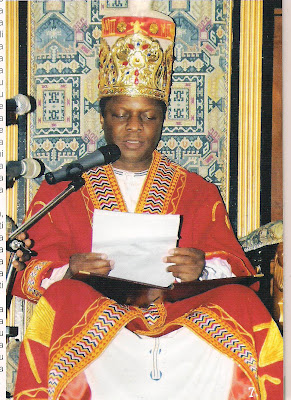 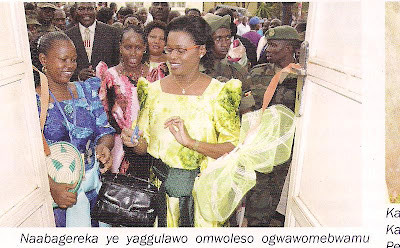 The Nabagereka Foundation mobilisation has greatly been helped by CBS publicity. 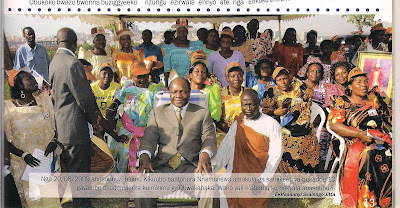 The Business community of Kikuubo in Kampala raised shs 13m to buy a Certificate from Mengo; all efforts facilitated by CBS radio. 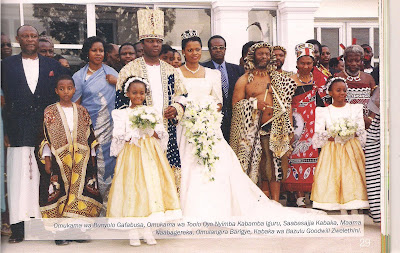 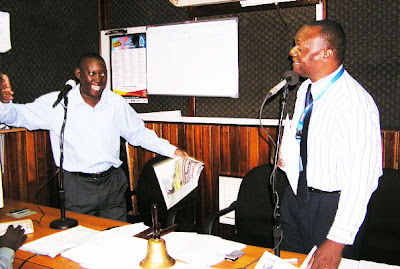 GOOD OLD DAYS: CBS’ Kato Lubwama (L) and Abby Mukiibi during their morning show, before the station was closed. PHOTO BY EDGAR BATTE
Given that about 30 million was being earned daily by the time the station was closed down (making 900 million a month), a total of about shs 7.2bn has been lost in would be income. This is not all; there is money that was being raised from other functions that CBS could time and again organize, and the mobilization for resources for various projects all of which were easy when the radio was on air. It is important to note that the over 100 employees have for more than 6 months (I assume) not got salary and other benefits as the station has since been closed! We need to remember that there are a number of educative programmes; some cultural, others skill development that were being aired on the station for the benefit of the listeners.
With that background, it is true; the station keeping clear of partisan politics cannot make it lose money, and that should be the way to go if it is opened. The people were supporting it because among other things it is a pillar for development and enhances communication within Uganda. We should re – focus on what the people can benefit from the station and see that it helps them develop to have useful citizens with time. If the central government is uncomfortable with presenters; I think it is best to observe because what government likes does not stop Buganda from getting income or even educating the people.
William Kituuka

Closed radio owners turn to Saleh, Mirundi
Written by Edris Kiggundu
Thursday, 29 October 2009 03:47
The fate of radio stations closed during the September riots in Kampala and other parts of Buganda remains unknown more than one and a half months later. CBS, Suubi FM, Akaboozi Ku Biri and Radio Sapientia were closed on September 10 for reportedly inciting people to demonstrate against the government. Radio Sapientia was re-opened later, with a warning to stick to religious issues, after its management agreed to suspend three presenters.
Since then, managers of the other stations have been engaged in a series of negotiations with the Broadcasting Council, the body that regulates the industry, but it appears they have covered little ground.
For now, radio managers claim negotiations are still ongoing and many are positive they will end on a fruitful note.
“We shall be opened soon that is what we have been told,” said Bogere Masembe, the Managing Director of Suubi FM last week. Behind the scenes, we understand that radio owners have been pleading with President Museveni and lobbying other senior government officials to have their stations re-opened.
Kaboozi Ku Biri owner, Mohan Kiwanuka and his wife Maria, have reportedly met Museveni who keeps assuring them that their matter will be sorted out, sources have told us. Kiwanuka is reportedly banking on his strong links to the NRM for which he is said to be a leading financier.
On the other hand, Kaaya Kavuma, the Managing Director of CBS, has engaged Gen. Salim Saleh, Museveni’s younger brother, in a bid to have the Buganda Kingdom-owned radio re-opened. It is also understood that after Museveni met Kabaka Ronald Muwenda Mutebi last month, relations between Mengo and the central government have been less hostile – and this raises the possibility of CBS re-opening.
Museveni recently told journalists at State House Entebbe that CBS will be re-opened following the outcome of his talks with the Kabaka.
Reliable sources have told us that Suubi has been lobbying through Tamale Mirundi, the President’s Press Secretary. Also involved in the negotiations is the National Association of Broadcasters (NAB). This organisation, which brings together all broadcasters in Uganda, is chaired by Capt. Francis Babu.
During a recent meeting between NAB and the Broadcasting Council, Babu castigated the regulatory body for closing the stations without prior warning, saying this will create tension and fear within the industry.
“We want to request you to go back and talk to your bosses to review your policy and re-open these radios,” Babu told the BC boss, Godfrey Mutabazi. Indeed some media houses, fearing to annoy the government, have moved fast to censor themselves and in extreme cases, some have sacked or suspended employees deemed to have crossed the line.
An example is our recent report on Masaka-based Radio Buddu, which sacked seven employees, accusing them of failing to observe minimum broadcasting standards (See: Masaka’s Radio Buddu sacks 7; The Observer, October 15-18).
The closure of the radio stations has had a profound effect on their economic base. Many have lost hundreds of millions of shillings in advertising revenue, their major source of profit. The employees have meanwhile been rendered idle and all they do is to come to office everyday, trying to catch up on the latest developments.
A few lucky ones, like Abbey Mukiibi of CBS, have taken to their other vocations like drama. Tittie Tabel, known for giving advice on marital issues, now hosts a popular TV show on NBS, titled Tittie’s Show. Some of the employees of Akaboozi Ku Biri have been moved to Radio One, a sister station, and given other tasks.
Some of the employees we spoke to revealed that their employers have continued paying their salaries. An employee of Akaboozi Kubiri told us that when the workers met the proprietor, Kiwanuka, at his Kololo residence recently, he assured them that they would continue earning a salary.
“He told us that even if they closed us for a year, he would still pay our salaries,” said the employee who requested anonymity because management warned them against speaking publicly to other media houses for fear of jeopardising the negotiations.
ekiggundu@observer.ug

The management and staff of CBS fm radio have dissociated themselves from a group of employees who went to meet the president in state house at Entebbe over the radio’s closure early this week.

A group of employees including Davis Kiraga, Geoffrey Ndugga, Jennifer Christine Nassozi, Tamale Kkonde and Godfrey Sseguya aka Kayibanda went to state house to meet President Museveni pleading to him to reopen the radio.
In a press conference held at the radio premises in Bulange, Mengo, the General Manager of the radio Kawooya Mwebe clarified that these employees were neither representing the management nor its other employees.
He stressed that the radio’s management is firm on its position with the case filed to the high court and respect the judge’s advice of settling the case out of court if the radio will be reopened.
Kawooya further stressed that as CBS management, they do not object to anyone meeting the president because it’s their right but meeting him on matters relating to the radio without their consent or that of all the employees is not acceptable.
The few employees who went to state house did not seek permission or inform the radio’s management or any of its other employees. This therefore means that they did it behind their employers’ backs. Kawooya added.
Kawooya maintained that these employees had their own agendas to fulfill because there is a respected committee led by Ex- Katikkiro Joseph Mulwanyamuli Ssemwogere which has on several occasions met the president over the reopening of CBS and therefore it did not necessitate any other person’s intervention into the same matter. Source: http://kampalatoday.wordpress.com/2010/04/26/cbs-management-clarifies-on-kayibanda-museveni-meeting/ 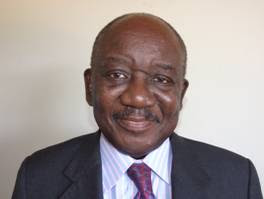 Oweek. Kaaya Kavuma Managing Director, CBS FM
MINISTER KABAKUMBA MATSIKO VISITS CBS FM
The minister of information from the central government, Kabakumba Matsiko paid a curtsy visit to CBS FM radio at Bulange in Mengo.
According to our reporter, the minister’s visit was part of her familiarization tour of the radio.
During her visit to the radio, Matsiko called upon private media institution owners to make use of her officer especially where they face challenges and obstacles in the course of executing their duties.
She also met the board of directors of the radio and discussed various issues concerning the role of the media house to the society. Matsiko further commended private media houses for their role in complimenting the government’s role of educating and mobilizing the public for development.
Matsiko thanked CBS radio for airing programmes that target positive transformation of people and therefore promised to work with the radio to reach out to communities in the central region for development.
The managing Director for CBS FM radio, Godfrey Kaaya Kavuma while giving his remarks emphasized the need to promote Buganda’s interests and to educate the public especially the youth whose morals are degenerating in the face of modernity and globalization.
Kaaya added that the central government has on several occasions misconceived the radio programmes and branded the radio as oppositional yet the radio’s motive is to improve on the political, social, economic and cultural welfare of its listeners.
John Sebana Kizito also one of the directors of the radio appealed to the minister to incorporate the radio’s development programmes especially Nsidiika njake into the main stream government development programmes like prosperity for all.
The radio’s general manager, Michael Kawooya Mwebe highlighted some of CBS fm’s corporate responsibilities icluding covering social course programmes, covering fundraising for heart patients, donating to hospitals, painting Zebra crossings, construction of schools and organization of music festivals and football tournaments.

The letter closing CBS radio - Source: http://kalinaki.blogspot.com/2009/09/here-is-letter-closing-cbs-radio.html
BC/FM/96/04
11th September 2009
The General Manager
Central Broadcasting Service (CBS)
Bulange, Mengo
RE: COMPLIANCE THE WITH MINIMUM BROADCASTING STANDARDS BY CENTRAL BROADCASTING SERVICES
We refer to the Electronic Media Act, and more specifically to section 7 read together with section 8 thereof, which requires that the right to broadcast be exercised in accordance with the minimum broadcasting standards which are contained in the First schedule to the Act.
We also refer to the terms and conditions for operating a broadcasting license duly executed by Central Broadcasting Service (CBS) as a prerequisite for the renewal of the license for the period 2009/2010.
As you may be aware, non compliance by Central Broadcasting Service (CBS) with the minimum broadcasting standards and other general provisions of the law has been the subject of continued dialogue between the Broadcasting Council and the management of (CBS) from September 2007 to date.
The Public Spectrum Rationale
Note that the electromagnetic spectrum has been deemed, since the beginning of broadcast regulation, to be a publicly owned natural resource. This "scarce public resource" rationale forms the foundation on which broadcast regulation is based. In the case of Uganda, the Government allocates frequencies to broadcasters
including Central Broadcasting Services to be utilised within the framework of the Electronic Media Act and other relevant laws. It must be emphasised at this point that the electromagnetic spectrum remains the property of the Government of Uganda and has simply been allocated to a broadcaster to be utilised as per agreed terms and conditions.
The Minimum Broadcasting Standards and the Terms and Conditions
The minimum broadcasting standards requires that:
(a) any programme which is broadcast:
(i) is not contrary to public morality;
(ii)does not promote the culture of violence or ethnical prejudice among the public, especially the children and the youth;
(iii) in the case of a news broadcast is free from distortion of facts;
(iv) is not likely to create public insecurity or violence;
(v) is in compliance with the existing law;

(b) Programmes that are broadcast are balanced to ensure harmony in such programmes;