Changing the Electoral Commissioners is not enough, the system needs overhaul 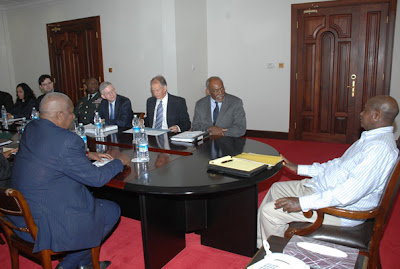 THE MEETING: President Museveni (R) on Thursday came to the defence of the EC in a meeting with Mr Carson (2nd R). PPU PHOTO

An new Electoral Commission can be put in place but may not do much to rectify the problem in cheating, the cheating is a summation of mal-practices at a number of levels which include the involvement of staff at various ranks and other parties. So, it is a complex such that even if Government changed the Commissioners the people who engineer things only if identified, the problem will not be solved. Such change of Commission would also call for new Commissioners to do a lot of ground work to unearth electoral irregularities and do something about them if they can.
William Kituuka

Museveni tells US he will not fire EC
By Tabu Butagira
Posted Friday, May 21 2010 at 00:00
The visiting top American diplomat for Africa, Ambassador Johnnie Carson, on Thursday asked President Museveni to reconstitute the Electoral Commission to include more representation of all political parties.
Sources say Mr Carson, a former US ambassador to Uganda, told President Museveni public confidence in the election process ahead of the 2011 ballot is vital.
However, Mr Museveni, according to a statement issued by State House, defended EC chairman Eng. Badru Badru and his other six commissioners as professionals properly vetted by Parliament’s Appointments Committee, comprising opposition MPs.
In Thursday’s statement, Ms Lindah Nabusayi, the deputy presidential press secretary, said during the closed-door meeting Ambassador Carson “said that some groups in Uganda had raised concern over membership of the commission. He said they feel that there should be more representation to the electoral body.”
In recent months, the Inter-Party Cooperation, a grouping of four opposition political parties, has demanded the disbandment of the current commission.
But the President, who reportedly met Ambassador Carson for close to three hours, appeared unfazed – at least in remarks captured by his press team.
Cup of coffee
“The President advised Uganda’s development partners not to allow opposition politicians to confuse them with lies,” State House said.
Mr Museveni is reported to have said: “When they come, give them a cup of coffee to boost our coffee industry and send them away because what they are complaining about can be discussed in the Inter-Party Forum [a consensus-building avenue for all parties].”
Ms Joann Lockard, the public affairs officer at the US Mission in Kampala, when asked if Ambassador Carson dropped a letter calling for outright disbandment of the EC, said: “I’m not aware and I can neither confirm nor deny that.”
Thursday’s meeting also discussed reported flaws in the ongoing biometric voter registration exercise.
Opposition meet
The four leaders of IPC; UPC’s Otunnu, Dr Kizza Besigye (FDC), Mr John Lukyamuzi (Conservative Party) and Mr Mohammed Kibirige (JEEMA) met late into the night on Thursday at their Katonga Road head office in Kampala, ahead of their meeting with Ambassador Carson on Friday.
“Mr Museveni listens more to foreign diplomats and international voices,” said Mr Ibrahim Nganda, the IPC spokesman.
“Ambassador Carson is a unique visitor and we are going to speak to him about electoral reforms, the attempts by the ruling NRM party to rig the upcoming elections and the swindling of public resources by government officials.”
Meanwhile, Reuters news agency reported last evening that Uganda’s opposition could boycott the elections.
“This EC is deeply discredited and cannot hold a free and fair election as demanded by the Constitution,” Kibirige Mayanja, chairman of the IPC told Reuters.
“We hope the government will hear the desire of Ugandans and sack the leadership of the EC. But should they remain obstinate we’ll boycott any electoral activity organised by them.”
US Ambassador to Uganda Jerry Lanier; Mr Vann Van Diepen, the acting assistant secretary for the Bureau of International Security and Non-proliferation, General William Ward, Commander of the US Africa command accompanied Ambassador Carson.
The Uganda delegation included the Chief of Defence Forces, Gen. Aronda Nyakairima, Foreign Affairs Minister Sam Kutesa and his Permanent Secretary, Ambassador James Mugume.
Mr Mugume later said Ambassador Carson had asked Uganda, a non-permanent member of the UN Security Council, to support a draft resolution for sanctions on Iran that his country introduced on Wednesday.

Inside Politics
‘We need an Electoral Commission accepted by all’ - Source: http://www.monitor.co.ug/Magazines/-/689844/827196/-/view/printVersion/-/14ibxukz/-/index.html
By Risdel Kasasira
Posted Saturday, December 19 2009 at 18:28
In Summary
First of all, the reduction is not good. The relevant amendment for displaying registers should have been use of notice boards to display names of the voters. They should have produced notice boards for display.
On Tuesday, the government presented four Bills spelling out amendments to laws critical to the holding of 2011 general elections. The Bills have been dismissed as largely lacking in fundamental substance to significantly change the political landscape that has been characterised by challenged elections in both 2001 and 2006. Inside Politics Risdel Kasasira speaks to the Forum for Democratic Change Secretary General Alice Alaso to find out how the opposition view the development.
Do you think the proposed electoral reforms are good enough to cause free and fair elections in 2011?
What happened was that, they (government) didn’t listen. They completely ignored what the Inter-Party-Cooperation has always demanded. The Attorney General ignored, what the observers of elections and Electoral Commission have said. These reforms don’t mean anything to the democratic process of this country. There were demands that constituency results be declared at the constituency, not at the district level.
The constituency elections should be announced at the constituency. Why do they want to bring everybody at the district?
Most of the rigging is done by returning officers at the district; that’s why it’s right to announce the results at the district. They have also completely left out the tenure of the commissioners of Electoral Commission for President Museveni alone to decide. They 9reforms are shallow and mean nothing to this country.]
The Presidential Amendment Bill seeks to prohibit candidates from contributing during fundraising campaigns. Is this the most important reform needed to have free and fair elections?
No. It’s not what is needed. It should have been the substantiality effect, which has let this country down. It’s not fundraising campaigns. It should have been how much rigging, how much intimidation and how much violence - not fundraising campaigns. Without this reform, elections will be rigged, there will be violence and intimidation and the Supreme Court, like it has ruled in the past, rule that there was no substantial rigging. As long as there is rigging, no matter at what level, the elections will be unfair.
I think with the so-called reforms on campaigns, they are just being apologetic to bribes they give voters. The reforms should also have stopped the incumbent from announcing and giving new districts during campaigns. Fundraising campaigns can be stopped but that won’t help to bring sanity in our electoral process.
Do you think the reduction of the days to display the registers from 21 to 15 are long enough for all the voters to cross-check their names?
First of all, the reduction is not good. The relevant amendment for displaying registers should have been use of notice boards to display names of the voters. They should have produced notice boards for display.
What we have been told is that we shall have polling assistants sitting and folding registers and then go home in the evening; that’s not display. We should have notice boards on every polling station for voters to come and check their names as and when they wish.
The opposition has been calling for an independent electoral commission. However, the new reforms are silent on this issue.
The main amendment should have been constitutional amendments, especially the tenure of the Electoral Commission, its composition, how it is originated, and composed. The Attorney General has done a disservice to this nation.
With the present Electoral Commission that operates at the mercy of President Museveni, an electoral body that can be fired or appointed by the President as and when he wishes; you will never have a free and fair elections.
The reforms should have strengthened the tenure of the commissioners to be the same as the tenure of the High Court Judges for impartial discretion. We also need an Electoral Commission accepted by all, in terms of composition and who constitutes it. Like in America, there are Republican nominees, there are Democratic nominees. We don’t want an Electoral Commission which is appointed and fired by President Museveni.
Uganda’s electoral process has in the past been marred by violence and rigging. What do you think should be done to reduce violence during campaigns?
First of all, the army should be got out of elections at all levels in the electoral process - whether monitoring or whatever. Secondly, President Museveni and his team must allow Ugandans to exercise their political rights.

The New York based Human Rights Watch has called for urgent investigation of reports of ballot stuffing, multiple voting, and potentially hundreds of thousands of people denied the right to vote in the Ugandan elections.
The human rights body also wants the Electoral Commission to publish the electoral results of the February 23 Presidential and Parliamentary elections from each polling station to facilitate a meaningful review.
According to the Electoral Commission, President Yoweri Museveni, who was the candidate of the National Resistance Movement retained his seat with more than 59 percent of the vote in Ugandas first multiparty election in the last 26 years.
His main challenger and Forum for Democratic Change President, Dr. Kizza Besigye was second with some 36 percent of the votes cast. Besigye and his party rejected the election results, citing widespread irregularities and fraud.
On Tuesday, Besigye announced that the party would file a petition with Ugandas Supreme Court. He claimed that in addition to disenfranchised voters, there were discrepancies between the tallies from polling stations and voting districts.
Human Rights Watch said that the Electoral Commission has so far refused to publish presidential election results broken down by polling station. Instead, it has referred observers to the district level tallies in each of Ugandas 69 districts, creating an impediment to full and proper public scrutiny of the results, the rights group said.
In a statement issued on Friday, Human Rights Watch wants that the Electoral Commission to publish all results by polling station as soon as possible to provide transparency of the election results.
Jemera Rone, East Africa coordinator for Human Rights Watch said that already both domestic and international observers have reported serious irregularities in the Ugandan election. To ensure that the voices of Ugandans are heard, judicial review is both appropriate and necessary, she said in a statement issued on Friday. She said that although on Election Day, violence was minimal, domestic and international observers noted major irregularities. Across the country, they observed that election officers denied possibly hundreds of thousands of registered voters the right to vote because they were allegedly not on the voter register, the statement read.
Other irregularities reported include voting by underage boys and girls, and voters illegally turned away from polling stations by presiding officers after 5 P.M. Under the law, all voters in line by 5 P.M. had the right to vote. Human Rights Watch said that the Democracy Monitoring Group (DEMGroup), a Ugandan nongovernmental organization, which deployed monitors to nearly all of the 19,786 polling stations across the country, said that more than 150,000 Ugandans were disenfranchised.
It also said that another Ugandan nongovernmental organization, the Foundation for Human Rights Initiatives, documented partisan electoral officials, Electoral Commission failure to update the register, and multiple voting, among other things.
Given credible claims from observer groups and the opposition, there must be an impartial judicial process, said Rone. An independent assessment of the facts and a prompt analysis of the legality of the events are essential to maintain citizens faith in the electoral process.
Posted by williamkituuka.com at 3:11 AM