The reasons Hon. Jaberi Bidandi Ssali gives for his party not joining the Inter Party Cooperation (IPC) are not convincing 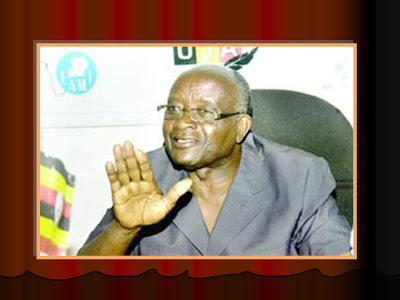 Bidandi addressing the conference
On Thursday, 6 May 2010, Hon. Jaberi Bidandi Ssali gave his party’s position regarding joining the Inter Party Cooperation (IPC) a vehicle seen as the possible means to get President Museveni off the Presidential chair hence change the affairs of the country which currently is off the development road to the promised land. Bidandi Ssali compares the IPC to the Moshi Spirit which saw the elected leader Yusufu Kironde Lule (Prof) only 68 days in the office of President. Bidandi Ssali also talks about the arrangement defeating the multi – party dispensation. What Hon. Ssali fails to realize is that the current NRM arrangement is equally a failed model given the ideals that sold it and what the people see today. It is remembered that President Museveni initially wanted 4 years; this was prolonged and his tenure was due to end in 2006. It is surprising that he will still contest the 2011 after 25 years in leadership; though in his 2001 election manifesto he clearly stated that it was his last term. We the electorate learn lessons from this type of development, however, what we need to do is to make agreements that make sense to which Hon. Bidandi can contribute substantially. Indeed Uganda will not be the first country no the last to have such an arrangement. We need to forge a head, and Hon. Bidandi Ssali should see himself as the best qualified candidate if only he can get to the cooperation and also see that whatever is not well stated or organized in the agreement can be rectified more so it must all confirm to the Constitution of Uganda.
Hon. Bidandi Ssali was party to President Museveni’s Manifesto of 2001, and it was largely speculated that he was the potential Vice President; it is not clear how things changed. The cooperation can stand to gain from Hon. Bidandi Ssali given his influence having been Minister and architect of the decentralization which goes up to LC1. But it is equally true that Hon. Bidandi can have numbers if he joins the IPC as it looks like he better qualified given the circumstances. It will be unfortunate due to his party’s decision that the NRM gets another 5 years; yet when it would be possible to make gentlemen agreements that can stand time so that the regime gets out of office through the vote.
William Kituuka

Bidandi refuses to join parties coalition
Thursday, 6th May, 2010
By Jude Kafuuma
THE People’s Progressive Party (PPP) president, Jaberi Bidandi Ssali, has declared that his party will not join the Inter-Party Co-operation (IPC).
“We don’t support the idea of having one presidential candidate because it has never worked,” Bidandi said.
He said political coalitions have failed since 1962 when the Uganda People’s Conference (UPC) and Kabaka Yekka united to overthrow the Government but instead caused blood-shed.
The PPP boss also noted that after the 1980 elections, Dr. Andrew Lutaakome Kayiira and President Yoweri Museveni co-operated to overthrow Obote’s government but Kayiira was later killed. The truth of his death has never been established.
“Even then, political parties have not worked hard on a strong foundation of institutions that can support their political ambitions. This is an important factor for the opposition,” Bidandi said.
He was addressing journalists at the Uganda Journalists Association headquarters in Kampala yesterday.
The parties under the coalition are UPC, Forum for Democratic Change, Justice Forum and Conservative Party.
The Democratic Party will give its position by the end of May.
The IPC will elect a flag-bearer in June.
However, Bidandi added that PPP would support a candidate fronted by the opposition against the NRM at the constituency level.
Bidandi also threatened to boycott next year’s general elections if the Electoral Commission does not address issues raised by the opposition since the 2006 elections.
This will be the second time the PPP will not participate in the elections.
The party did not take part in the last parliamentary elections, saying it was not prepared.
However, it contested in the 2008 Kyaddondo North by-elections where PPP’s Ssentamu Ssewandagi lost to Robert NRM’s Kasule.
PPP will hold its national delegates’ conference before the end of June to elect the national executive committee.
When the IPC committee members recently met the Electoral Commission chairman, Eng. Badru Kiggundu, Bidandi admitted that the commission was correcting the irregularities in the voter registration exercise.

Parties discuss power sharing, 2011 manifesto - Source: http://observer.ug/index.php?option=com_content&view=article&id=4088:parties-discuss-power-sharing-2011-manifesto&catid=34:news&Itemid=59
Written by OUR REPORTERS
Thursday, 02 July 2009 06:48
Discussions on joint candidates and other areas of mutual interest to the co-operating political parties have been delayed by Bidandi Ssali and Michael Mabikke’s impending arrival
A special committee of the Inter Party Co-operation (IPC) will meet for three days in two weeks’ time to discuss how IPC members will write a single manifesto and field joint candidates for the 2011 general elections.
The committee will also discuss power sharing. FDC, JEEMA, UPC and CP recently wrote party position papers that will form the basis for the discussion. Each party will be represented by five people on the committee.
Augustine Ruzindana, Wafula Oguttu, Salaamu Musumba, Ronald Reagan Okumu and Obeid Kamulegeya will represent FDC; while Patrick Mwondha, Chris Opoka Okumu, Gorret Byaruhanga, Joel Aliro Omara and John Wagonda Muguli will be there for UPC.
The CP team comprises D. Walyemera, Edmond Nkalubo, John Orid, H. Tamale and H. Ssewanyanawhile; while JEEMA will be represented by Imam Kasozi, Ibrahim Nsamba, S. Chemisto, M. Kayiira and F. Kimbowa.
The committee will come up with harmonised guidelines to guide the process of choosing a joint presidential candidate as well as joint parliamentary and local council candidates. This work is already behind schedule as it was supposed to have been concluded by the end of June. In fact, the IPC had planned to sign a second protocol on June 26, announcing an agreement to write a joint manifesto and to field joint candidates.
MABIKKE, BIDANDI
Sources said that the delay was partly as a result of talks with the Peoples Progressive Party (PPP) chairman, Jaberi Bidandi Ssali and the Social Democrats Party (SDP) of Makindye East MP, Michael Mabikke—both parties having expressed interest to join the IPC. Mabikke confirmed in a telephone interview that his party, which was invited by the IPC, has filed a formal application to join.
“It is in the interest of the opposition that we all work together for the 2011 elections; we can revert to our individual organisations after. The biggest bottleneck to the development of multiparty democracy is Museveni and his NRM. He is using state resources, has fused his party with the state, all of which we need to reverse by working together,” Mabikke said.
Mabikke added that parties must work together to remove Museveni so as to restore full democracy.
On his part, Bidandi said the executive committee of PPP has discussed the possibility of joining the IPC, while the party will convene a National Council in a fortnight to discuss the extent to which their party can co-operate with others.
Oguttu, the spokesman of FDC, and one of the main promoters of the IPC, said in an interview that discussions with PPP and SDP would result in them contributing ideas to a joint electoral platform.
The IPC announced on May 14, while launching electoral reforms in the Parliamentary Gardens, that it would stage regional public rallies to popularise the planned reforms.
The four leaders of the co-operating parties; Dr. Kizza Besigye, Muhammad Kibirige Mayanja, John Ken Lukyamuzi and Miria Kalule Obote were supposed to hold joint public rallies to sell their proposed reforms to the people. But our sources say UPC refused to participate in this exercise.
Officially, UPC told the IPC that they want to first organise their grassroots elections. But some sources have pointed at internal party wrangles dogging the party.
A section of UPC leaders, including those recently sacked by the party president - Peter Walubiri, Livingstone Okello Okello, and Patrick Mwondha - support the IPC. But another group, which includes Jimmy Akena and Henry Mayiga—some of the candidates for the party presidency, are reluctant to join the co-operation. In fact, a recent UPC National Council voted against fielding joint candidates.
POWER SHARING
The FDC is proposing that the top five political offices in the country should be shared should the IPC win the 2011 elections. The party that brings a joint presidential candidate will certainly take the presidency.
Since the vice president automatically succeeds the president in case of death, the FDC wants the same party to take the vice presidency. The other parties should share the remaining three political offices; Prime Minister, Speaker and Deputy Speaker.
Cabinet posts should be shared according to strengths displayed during the general elections.
In its document, the CP proposes proportional sharing of positions, according to the outcome of the general elections.
The UPC on the other hand is proposing that, “the sharing of the Cabinet positions must be negotiated six months before going into elections. If one party takes the Presidency, then that party should take only 40% of the Cabinet positions while the other parties share the remaining 60% in proportion to their strength.”
MANIFSTO
UPC outlines eight structures which it wants included in the manifesto. These are; poverty, corruption and recovery of stolen properties, unity and equitable distribution of resources, employment- job creation, education, health, agriculture and reconstruction of northern Uganda.
CP focuses mainly on a clean environment, land, culture and a mixed economy. On its part, the FDC dwells on agriculture, environment, trade, industry, education, health, water, information, transport, communication, etc.
The FDC wants the IPC manifesto “to uphold the aspirations of the people of Uganda in respect of a federal system of governance as contained in the Justice Odoki and Prof. Sempebwa reports. Each federal state shall be empowered to levy certain taxes and to address development issues in its territory and re-organise districts.”
Look out for the details of FDC’s and other position papers in our Monday edition.
newseditor@observer.ug