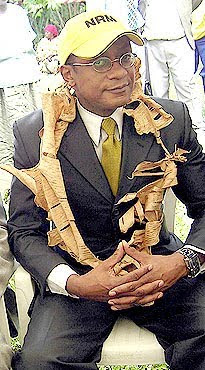 Peter Sematimba is remembered for teaching sex on Radio 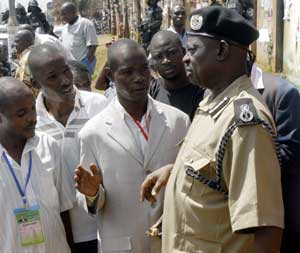 The Regional Police Commander Southern Andrew Sorowen listens to complaints from voters at Bukesa polling station in Kampala. (Photo by Ronnie Kijjambu)
Elections for Kampala mayor and LC V councilors have been cancelled.
Electoral Commission deputy Vice chairperson Joseph Biribonwa has told a news conference in Kampala that the suspension was necessary due reported cases of malpractices at different polling stations.
He said at some polling stations, ballot boxes were already full by 9 am.
Voters at different polling stations have been advised to go and wait for a new date that will be communicated by the electoral body for elections.

THE ELECTORAL COMMISSION MUST DISQUALIFY PETER SEMATIMBA
It is sad how low Uganda has sunk under the NRM leadership. With all the reports and evidence around which led to the cancellation of the polling in Kampala district, the so – called Pastor Peter Sematimba could with confidence move around the radio stations defending himself of the allegations of his involvement! It is indeed sad. We deserve better. If matters clean and clear like this where people were beaten by a pre – arranged mob, ballot boxes stuffed with ballots alleged not officially supplied by the Electoral Commission with the candidate in whose favour even a child can see, if gangsters were seen come from Sematimba’s Super Radio Station, and more so that while some wrongs were being done the Policemen looked on, it simply becomes ridiculous that Sematimba has not faced the law yet. Whether Sematimba alleges that some people may have done all this without his knowledge, we are well aware how the NRM has degenerated and many players in the party are shameless. We are told that NRM wanted to get the Lord Mayor Ship at all cost, and that is the reason behind Sematimba’s arrogance.
The Electoral Commission stands warned. They may take things for granted, but the sum total of the wrongs they see done and pay lip service may easily lead to bloodshed.
The Commission is now preparing a fresh poll for Kampala district. How can the tax payer meet astronomical sums of money to get the logistics for this election once again without the culprit being put to book? Don’t take Ugandans for fools. Sematimba has faced the public opinion court and he MUST be removed from the race before a free election is conducted. There is no short cut.

Peter Sematimba confirmed as NRM flag bearer for Kampala Mayoral seat
The National Resistance Movement has reconsidered and decided to front Peter Sematimab as the party’s flag bearer in the elector of Lord Mayor of Kampala City.
Mbabazi says the party has convinced one of its members, Eddie Kasule who had secured a Court order blocking the nomination of Sematimba as NRM flag bearer to withdraw the petition.
Mbabazi says Kasule will now compete as the NRM flag bearer for Lubaga Division, a position currently held by Peter Sematimba.
The NRM insists that Pastor Peter Sematimba has the best chance for the ruling party to compete and win the Lord Mayor of Kampala seat, whose nominations close on Tuesday.
However, the Vice Chairman of NRM for Central Uganda, Capt Francis Babu still insists he will compete as an independent candidate saying the nomination of Sematimba was irregular because no primaries were held by the NRM electoral commission.
Three other candidates have already expressed interest in the Kampala Mayoral seat. They include Kampala Central MP, Erias Lukwago who was nominated as an independent candidate, Makindye East Mp, Michael Mabikke who will be nominated Monday on the Inter Party Cooperation ticket, and another Independent candidate, Sandra Katebalirwe Ngabo. 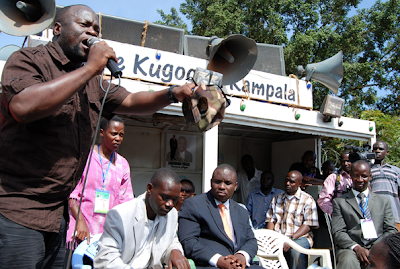 National Resistance Movement Kampala mayoral candidate, Peter Sematimba could be kicked out of the race if the demand for his disqualification by all candidates is accepted. The Local Government Act under which this election was held states that any person who interferes with a ballot box, ballot documents or any other property in use or intended to be used for the purpose of an election shall be disqualified from standing or participating in an election for a period of not less than three years.
This law also stipulates more punishments like imprisonment not exceeding three years, and payment of a specific fine.
The candidates yesterday demanded Mr Sematimba’s disqualification, accusing him of masterminding the chaos and rigging that led to the cancellation of their polls.

Threats to pullout
“That is the thuggery that he will take to Kampala City Council and corruption will eat us the more. We don’t want him in the race anymore, us the innocent ones should continue,” said Ms Sandra Ngabo Katebalirwe (independent).
Ms Ngabo has threatened to pull out of the race if the EC doesn’t act on Mr Sematimba.
“The EC should apologise for the mess. They can’t disown ballot papers and ballot boxes, is there anyone with a master copy of the ballots?”said Capt. Francis Babu (independent). “We want to see the EC follow laws to the letter.”
Capt. Babu also alleged that a very senior ruling party official and other people met in a Kampala hotel on the eve of elections where they plotted how to buy off all the presiding officers.
“God talks through people, the man cheating has been exposed,” Capt. Babu said.
“Sematimba should be disqualified and compelled to apologise to people of Kampala for taking them for granted,” Capt. Babu said. “Our democratic process has been adulterated and dishonoured. Sematimba should be barred from engaging in active politics in this country for at least 10 years,” he insisted.

Ballot boxes seized from different polling areas around the city with ballots pre-ticked in Mr Sematimba’s favour sparked the chaos which forced the EC to cancel the whole process yesterday.
Mr Sematimba, however, denied any involvement. “This could have been done by my opponents to discredit me,” he said. “All my opponents should join me, police and the EC to investigate the cause and the guilty ones should be dealt with.”
The pre-ticking, suspected to have taken place in the wee hours of Wednesday morning came to the fore as voters turned up at the official opening timeof 7pm only to find ballot boxes full.
The mayoral candidates also cast blame on the EC and questioned the integrity of the just-concluded presidential and parliamentary polls in light of the shocking turn of events which transpired in the city yesterday.
“The EC hasn’t told us where the ballots came from. We are not sure if the February 18, general elections weren’t also done like this,” Ms Ngabo said.
Another independent candidate, Mr Erias Lukwago, who is the outgoing MP for Kampala Central, also asked that all his agents who have been arrested be set free unconditionally.

EC should resign
He demanded for resignation of the EC “because we are not sure the presidential polls weren’t rigged the same way.”
“This (rigging of elections) is the very reason that took Mr Museveni to the bush. We have seen the same stuff today. We need a free and fair poll not such vote thuggery,” Mr Lukwago said.
Electoral Commission officials, however, pleaded for understanding.
“What you can blame us on is failure to employ Angel Gabriels who can’t be corrupted to preside over the polls,” Mr Sam Rwakoojo, the EC secretary, said.
Deputy EC boss Joseph Biribonwa, who supervises Kampala electoral area, earlier in the day while announcing the cancellation accused his polling officials of conniving with candidates to stuff ballots and have an early start of polling hence violence.
He also said some other polling officials didn’t witness the opening of the exercise because it started earlier than normal.
Mr Biribonwa was, however, reluctant to delve into details of where the materials which arrived abnormally early came from when the storage is always done at the police stations.
“There has been a high degree of connivance of polling officials with candidates, we don’t know what time the stuffing took place, but the whole process is canceled,” Mr Biribonwa said.
He added that the police will take up the matter and investigate how the leakage happened.
Inter-Party Cooperation candidate Micheal Mabikke, who also accused rival Lukwago of being part of the confusion, said he was pleasantly surprised by the EC’s reaction.
“Time and again we have raised complaints with the commission and they refuse to act. That they have acted comes as a surprise,” Mr Mabikke said.
“It’s a pity that Sematimba and Lukwago have decided to behave like that. They should actually be disqualified. They should not be allowed to stand again,” he said.
Posted by williamkituuka.com at 11:02 PM