MUSEVENI IS TELLING US STORIES MUSEVENI IS TELLING US STORIES!!!
Many times when I listen to Museveni, all I realize is that the man is tired and he has failed to realize it. When he addresses Ugandans, he is of the style of the 1960’s hence not compliant with the 2000’s. Museveni knows very well that he had no contract whatsoever with Ugandans on spending so many years in Bush etc. He fought using excuses which don’t make sense now given that his Government is worse. The rigging of elections which took him to Luweero Bushes is of greater proportions today than the time he went to bush. He has failed to get to terms with situations like the unemployment of the youth which is at scandalous levels, because he is gambling in government with the basic objective of seeing that he remains there for life. It is absurd that a Government he leads could in broad day light bribe Members of Parliament with shs 20m out of which shs 6 million was taxed, and they end up telling us that this was anything to do with NAADS, we are beyond being fooled to such levels.
Museveni ought to get to terms with the reality. What Ugandans have seen through the campaign time disqualifies him from blaming others on issues to do with corruption. It is open and clear that he is leading a Government machinery with unacceptable levels of corruption, and it is corruption driven. This is sad. Who could ever imagine astronomical sums of money going into campaigns which the economy is limping on and donor driven? We surely deserve better.
There are so many blunders by his Government such that to many, the talk about fighting is seen as an umbrella where Museveni and company hid to cover their intentions and soon or later these will be clear to all.
William Kituuka Kiwanuka

MUSEVENI WARNS AGAINST DEMONSTRATION (BUT HE FORGETS THAT IT IS A RIGHT TO DEMONSTRATE!) 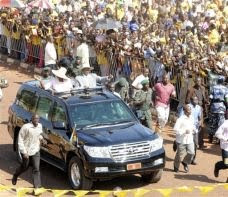 Museveni warns the opposition on demonstration
Uganda President Yoweri Museveni in a car, right, and his wife Janate Museveni, left, arrive at Kololo Airstrip in Uganda capital Kampala for the victory party of the ruling party, National Resistance Movement, Friday, Feb 25, 2011. Museveni won the elections to rule Uganda for another term of 5 years. Museveni has been in power in Uganda for 25 years, despite pledges earlier in his career to not follow in the footsteps of long-serving African dictators.
Read more: http://www.kyivpost.com/news/world/detail/98411/#ixzz1F7jdj9bO
"NEVER RISE AGAIN"
Museveni used the rally on Friday to warn against what would be sub-Saharan Africa's first anti-government protests since the uprisings that have spread through the north of the continent.
"They talk rubbish about Tunisia, Egypt and Libya, but none of those leaders spent 13 years fighting," he told the cheering crowd. "How can I fail to defend the unity of the people of Uganda? If you come threatening, I will deal with you decisively and you will never rise again.
"We will catch him and eat him like a cake," he added, referring to Besigye.
Several motorbike taxi drivers, notorious for past involvement in political riots, said they would join protests if they started. Many promised they would stay peaceful this time.
"Why can't we peacefully protest?" Besigye supporter Justice Opio, 34, asked as he hurried past the Museveni victory party.
"Why are the police saying they will stop it? The right to peacefully protest is protected."
Fear of violence was mentioned all over Kampala by supporters of both men as reason enough for hoping the protests would not happen.
Read more: http://www.kyivpost.com/news/world/detail/98411/#ixzz1F7kYX8e6

WHY AFRICAN LEADERS DON'T GIVE UP POWER
History, Culture and Global Politics

Read more at Suite101: Why African Leaders Don't Give up Power: History, Culture and Global Politics http://www.suite101.com/content/why-african-leaders-dont-give-up-power-a158531#ixzz1F7lKBRSD
Mugabe is in his 30th year as leader of Zimbabwe. Omar Bongo died in 2009 after forty one years in power in Gabon. Yoweri Museveni of Uganda is still holding on after grabbing power in 1986 following a guerrila war.
The list of African leaders either in the past or present who have clung to power is long, but what makes power so difficult to give up in Africa?
Struggle Against Colonial and Neo-Colonial Power
In southern Africa, Zimbabwe, Mozambique and Angola waged brutal wars to unseat colonial governments. By refusing to give up power through democratic means, colonial governments set a precedent in Africa. Those who took over from them learnt the same brutal lessons from their erstwhile colonizers.
Transfer of Power Between Africans

The handover of power between successive African governments has in many situations been through bloody coups or brutal guerrilla campaigns.
As with the removal of colonial governments, there is a feeling among African leaders that since they took great personal risks to get into power, they cannot hand it over through the ballot box. Robert Mugabe is a case in point. He spent much of his adult life either in prison or in exile. He sneaked into Mozambique after release from prison then organised a guerrilla campaign that played a part in forcing the Rhodesians to the negotiating table.
Writing in Mail&Guardian online on January 30, 2009, Alex Mathews argues that African leaders are not democratic, and most hold the view that liberation movements have the divine right to rule.
The unwritten rule seems to be that whovever wants to succeed a liberation movement must wrest power through war and bloodshed.
Posted by williamkituuka.com at 10:41 PM