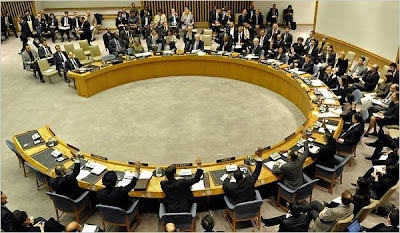 Peter Foley/European Pressphoto Agency
Ibrahim O. Dabbashi, right, Libya’s deputy permanent representative to the United Nations, spoke after voting on the U.N. Security Council on Saturday.
The vote, only the second time the Security Council has referred a member state to the International Criminal Court, comes after a week of bloody crackdowns in Libya in which Colonel Qaddafi’s security forces have fired on protesters, killing hundreds.
Also on Saturday, President Obama said that Colonel Qaddafi had lost the legitimacy to rule and should step down. His statement, which the White House said was made during a telephone call with Chancellor Angela Merkel of Germany, was the strongest yet from any American official against Colonel Qaddafi.
The Security Council resolution also imposes an arms embargo against Libya and an international travel ban on 16 Libyan leaders, and freezes the assets of Colonel Qaddafi and members of his family, including four sons and a daughter. Also included in the sanctions were measures against defense and intelligence officials who are believed to have played a role in the violence against civilians in Libya.
The sanctions did not include imposing a no-fly zone over Libya, a possibility that had been discussed by officials from the United States and its allies in recent days.
The resolution also prohibited all United Nations member nations from providing any kind of arms to Libya or allowing the transportation of mercenaries, who are believed to have played a part in the recent violence. Suspected shipments of arms should be halted and inspected, the resolution said.
While the sanctions are likely to take weeks to have an effect, they reflected widespread condemnation of Colonel Qaddafi’s tactics, by far the most brutal crackdown in the region since antigovernment demonstrations began.
Susan E. Rice, the United States ambassador to the United Nations, called the resolution “a clear warning to the Libyan government that it must stop the killing.”
But Turkey’s prime minister, Recep Tayyip Erdogan, warned Saturday that sanctions would do more harm to Libya’s people than to Colonel Qaddafi.
The attacks by Libya’s security forces on the protesters led the United States to close its embassy in Tripoli on Friday and Britain and France to close theirs on Saturday.
The United States on Friday imposed unilateral sanctions against Libya. It also froze billions of dollars of Libyan government assets and announced that it would do the same with the assets of high-ranking Libyan officials who took part in the violent crackdown.
At the United Nations, Security Council members initially disagreed during deliberations Saturday whether to approve the resolution, circulated by France, Germany, Britain and the United States, that would refer Colonel Qaddafi and his top aides to the International Criminal Court for prosecution, according to a senior United States official who observed the negotiations.
Libya’s own delegation to the United Nations had renounced Colonel Qaddafi on Monday, and later sent a letter to the Security Council president, Ambassador Maria Luiza Ribeiro Viotti of Brazil, supporting such a referral. That statement, the official said, went far to persuade reluctant Council members that they should go ahead with the referral.
After the resolution was approved, Libya’s ambassador to the United Nations, Abdurrahman Shalgam, who was once a close confidant of Colonel Qaddafi, said it would “help put an end to this fascist regime, which is still in existence in Tripoli.”
While some other details of the resolution were haggled over, the measure was remarkable for how quickly it came together, according to the official, who spoke on the condition of anonymity to preserve the confidentiality of the discussions. The official said the mood in the chamber was focused, with representatives of several countries expressing concern about the well-being of their citizens and generally exhibiting “a strong sense of urgency.”
Much uncertainty remained throughout the afternoon about how China, one of the Security Council’s five permanent members, would vote after having expressed doubt about the referral to the international court. After the Chinese delegation consulted with Beijing, it signaled it would vote to approve the measure.
The Security Council cast a similar vote before, in 2005 when it called for an investigation of violence and crimes against humanity in the Darfur region of Sudan, the American official said. The United States abstained from that vote, which the official attributed to “a different administration.” The court has indicted Sudan’s president, Omar Hassan al-Bashir, on charges of genocide.
The United Nations resolution on Saturday also established a committee to consider whether additional, targeted sanctions should be imposed on other individuals and entities “who commit serious human rights abuses, including ordering attacks and aerial bombardments on civilian populations or facilities.”
In Washington, a White House account of Saturday’s telephone call between Mr. Obama and Chancellor Merkel of Germany said the president told Mrs. Merkel that “when a leader’s only means of staying in power is to use mass violence against his own people, he has lost the legitimacy to rule and needs to do what is right for his country by leaving now.”
Posted by williamkituuka.com at 9:49 PM