IT IS SAD THAT MUSEVENI HAS TO BE TAUGHT DEMOCRATIC RIGHTS ! 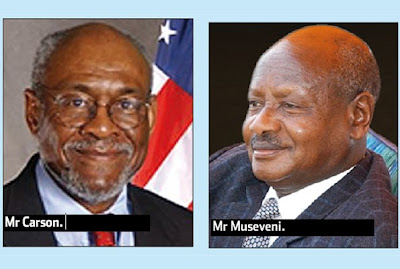 Kampala
President Museveni should stop bullying opposition activists and permit peaceful demonstrations because “freedom of association in a peaceful manner is a clear democratic right”, a top US diplomat has said.
In an interview aired Friday on the BBC’s The World Today programme, Assistant Secretary of State for Africa, Ambassador Johnnie Carson, said: “I would appeal to President Museveni to allow the peaceful demonstrations. Freedom of association in a peaceful manner is a clear democratic right; it is a fundamental right.”
Security officials have warned of decisive action against demonstrators ever since main opposition leaders in Uganda, among them Dr Kizza Besigye, who was flag bearer for the Inter-Party Cooperation, rejected results of the February 18 presidential vote.
Dr Besigye and compatriots; UPC’s Olara Otunnu, Mr Norbert Mao (DP) and former Independent candidate, Mr Samuel Lubega, mid-week called for peaceful protests countrywide to remove “President Museveni’s illegitimate government”.
In the interview with the British public broadcaster, Ambassador Carson, however, advised disgruntled opposition figureheads, whom he said he met a fortnight to the poll, to seek legal redress instead of resorting to street protests, because “we think that Uganda does have a fair justice system”.
“There is no doubt in my mind that this election was better than the previous elections and probably reflected the will of the majority [of voters],” he said.
The EU, Commonwealth and African Union observers all have, in their preliminary reports on the elections, pointed to inherent organisational and management lapses by election officials in conducting the ballot, vote-buying by the ruling NRM party and Mr Museveni leveraging incumbency to “severely compromise” free participation for the opposition.
Ambassador Carson, in a conflicting statement, said: “I want to stress that this was not a perfect election; there were numerous irregularities and systemic problems that need to, and must, be corrected in the future so that Uganda continues a positive democratic trajectory. If those problems are not corrected, I think we will see increasingly a lower voter turnout and greater dissatisfaction against the regime.”
Dr Besigye, responding to Ambassador Carson’s mixed remarks on the disputed poll, said it is “sad” Washington is “known to make common blunders” by nurturing and propping dictators in Africa while “pursuing short-term goals”. “And I think the government does that in betrayal of its own people because the people of the US have got a very, very clear solid view about people’s freedom everywhere in the world,” he said. “But their governments have been working with all the dictators in the world for short-term gains.”

Regrettable
Dr Besigye added: “That is the situation that I seem to see the US government making a mistake in Uganda. And it is extremely regrettable that this is being done by the Obama government which the people of Africa have been having great hope in; that it would help to advance democracy in Africa.”
State House last night said Mr Museveni, in power since 1986 and already one of Africa’s longest-serving Presidents, is no dictator and was validly re-elected as such the opposition honchos should stop acting as if they were “co-presidents and aiming to undermine the government”. “One way of losing power is to allow those people to behave as if they are co-presidents,” said Presidential Press Secretary Mirundi Tamale. “If people are trying to blackmail government by using force, the President has the mandate to use force to restore order and restore confidence.”
Mr Tamale said the President made promises on the campaign trail on how to make Uganda a better country and his strong statements aim at reassuring citizens to return to work so he can have the peace to implement his manifesto.
Ambassador Carson, in remarks to the BBC, said the US – that last week became the first of key international actors alongside the EU to openly congratulate President Museveni for winning, with 68 per cent, the February 18 ballot - “rejects intimidation” as a tool of governance.

Operatives warned
He warned security operatives charging to suppress peaceful demonstrators to be mindful of their words and actions, adding “I hope the threats of intimidation are inaccurate; that they do not reflect the view of President Museveni or the administration.” He made no mention of any likely repercussion(s) for perpetrators.
The top African diplomat spoke hours before Mr Museveni, in a victory speech to supporters at Kololo Airstrip, in Kampala, vowed to crush any protestor, including Dr Besigye, his former personal physician during the 1981-86 bush war, whom he said he will “pick like a samosa and devour like cake”. Mr Tamale, in a damage control manoeuvres, said last night that the President had been misunderstood and he meant to punish rioters, not peaceful demonstrators.
Defence and Military Spokesman Felix Kulayigye who mid-week promised “firm action” against demonstrators last evening, toned down saying “no one in his right mind would disallow peaceful demonstrations because I know that, that is a constitutional right”. “What I was referring to were rioters. I am always careful with my words,” he said, adding; “I will go to the guillotine with my earlier statement that: If anyone wants to overthrow the Constitution, we will have no option but to fight him.”
Lt. Kulayigye, without providing specifics, said what the opposition plan is not a peaceful protest, as they claim, but stirring unrest such as the one sweeping North Africa in order to overthrow an elected government.
However, police chief Kale Kayihura in a statement issued last night, warned that any planned demonstration or procession at this time and without police authorisation is “unlawful, and shall not be allowed to take place”.
Posted by williamkituuka.com at 11:53 PM