WHEN A REGIME/GOVERNMENT OVERSTAYS, DECAY IS EXPECTED 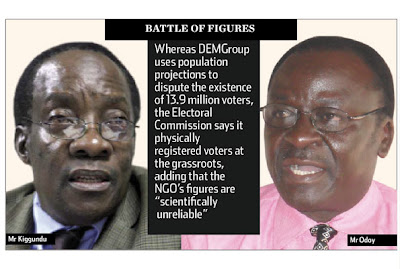 WHEN A REGIME/GOVERNMENT OVERSTAYS, DECAY IS EXPECTED
We were busy concerned that the Electoral Commission had not issued voter cards to all those who were registered on the last voter update, little did we know that among the tricks played by some people is eliminating names of voters from the register where they are supposed to vote from. While some people allege that voters need to be more responsible to the extent that they should have used the mechanisms put in place to establish whether they are on the register and where, it is true that a person who last checked when the display was made and saw his/her name there would least expect to be eliminated. It is absurd that some people take others for granted. If as alleged, the 5 year Bush war was wedged because of the cheating alleged to have taken place in 1980, no Ugandan worth his salt should take others for granted. It is bad enough to see a voter cry after failing to see his/her name on the voter register. In some other poling station, people who would be at that station were in a register in the neighbouring station. One wonders why people who are supposed to be responsible do this type of moves which can lead to blood shed.
The way forward on this is to put to task the responsible officers in the Electoral Commission to tell the public who gave the instructions to remove these voters from their respective polling stations and or change them to other areas. If a tribunal is supposed to authorize the removal of names of the dead or those who should be removed for other reasons, can we get to know the source of authority to those who actually removed these names or re-located them to other areas?
In Africa, we have failed to learn from the proven experiences elsewhere which among other strategies lead to a fixed term for the President. Once the ten years is exceeded, just expect this type of manipulations to keep on, until the problem of the leader is sorted out.
William Kituuka Kiwanuka

LARGE NUMBER OF PEOPLE FIND NAMES MISSING FROM REGISTER
Uganda Votes | February 18, 2011 at 4:37 pm
Reports coming in show that many voters from different parts of the country have been disenfranchised and sent away from polling stations because their names were not appearing on the voters’ register.
This brings back the argument of the failure by the Electoral Commission (EC) to issue voters with voters’ cards. EC told voters weeks before the election that they will be able to vote just by presenting their registration certificates, but to their surprise, many have today been sent away from polling stations, and thus could not voted.
Two affected people from Kitende polling station in Kajjansi expressed disappointment after being told by election officials that their names were not on the register. Namusisi Harriet, 28 said she could not go to any other polling station for lack of money for transport. 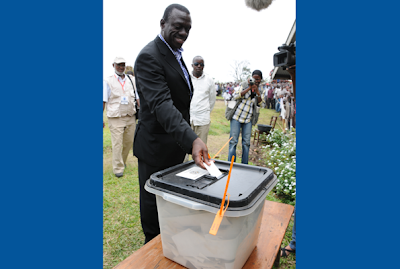 By Gerald Bareebe
Posted Friday, February 18 2011 at 16:00
After months of campaigning, Dr Kizza Besigye had one last vote to look for on Election Day – his own. The presidential candidate was shocked when he found his name missing from the polling station where he was due to vote.
Dr Besigye had been registered as a voter at Katenga Cell Municipal Stadium polling station. Instead he was advised to go to Rwakabengo Health Centre III polling station where he found his name and voted.
Accompanied by his wife Ms Winnie Byanyima, Dr Besigye, who arrived at the polling station at 12:30pm, said he was surprised that his name and that of many of his supporters were missing at the polling stations where they had initially been registered. He blamed the Electoral Commission for the mess.
“It has been done deliberately by the EC to frustrate our supporters from casting their ballot,” Dr Besigye said. Dr Besigye also explained that many of his supporters had moved to more than four polling stations only to find their names missing.
Dr Besigye claimed that many of the voters whose names are missing at various polling stations are in places where the opposition is very strong. He also claimed that his supporters and polling agents are being arrested and intimidated from monitoring the voting process.
“As we are talking now, we have several of our agents who have been arrested in many polling stations around the country. In Kyankwanzi, most of our agents have been arrested by the RDC and are being held at the district police head quarters,” Dr Besigye said.
He urged his agents who were arrested and later released not to sign the declaration forms because the process has been tampered with.
Dr Besigye also repeated his earlier statement that the IPC would declare its won results. “We made it clear how we will handle the post election situation. We have our own tally centres where we shall declare our own results and leave it to the people of Uganda to decide,” he said.

Posted Wednesday, February 16 2011 at 00:00
A leading pro-democracy group has shelved its report detailing anomalies in the national voters roll to be used for Friday’s elections after the Electoral Commission threatened court action to block release of the document which appears to confirm fears about the credibility of the register.
Sources say the Democracy Monitoring Group (DEMGroup), a civil society consortium largely funded by European countries, produced a report showing the existence of thousands of children, foreigners as well as duplicated adult voters’ particulars in the roll.
Figures disputed
The findings, which sources say the civil society group is now unsure whether to release officially, disputes as grossly inflated the official data showing that up to 13.9 million Ugandans are registered as voters for the February 18 election.
DEMGroup hinged its analysis on projected population trends and structures based on the 2002 National Housing and Population Census figures. In those figures, the Uganda Bureau of Statistics (UBOS) estimated Uganda’s population to be 31.7 million by mid last year, the time update of the national voter register got underway.
At the time, more than half of the population, according to UBOS, was under the age of 18, the threshold year under the country’s laws for anyone to qualify as a voter. Our investigations show that DEMGroup officials presented their preliminary findings to an Electoral Commission panel in a Monday meeting chaired by the Commission’s deputy chairman, Mr Joseph Biribonwa, but their hosts turned hostile.
“The Electoral Commission said it was going to seek a court injunction to stay release of the report,” a source we cannot name due to the sensitivity of the matter, said of the heated meeting.
Analysts’ view
Data analysts at the electoral body reportedly argued that the commission had carried out physical registration of voters at the grassroots while DEMGroup’s analysis, they said, is anchored on population projection figures and as such is “scientifically unreliable”.
“We sent them back with their report,” said an EC official who attended the Monday meeting.
Mr Biribonwa, who chaired the meeting that concluded on a bitter note, was not available for comment last night as his known mobile phone number was switched off.
EC Spokesman Willy Ochola confirmed the Monday meeting, but said he did not attend it. “I am not aware of the positions or resolutions reached,” he said. It emerged last night that some representatives of the DEMGroup funders have prevailed on the consortium’s board, formed principally to monitor elections and promote transparency and democracy, to gag its staff from divulging findings of the contested report.
But last night, Mr John Mary Odoy, the acting DEMGroup executive director, denied they were under any pressure to withhold the findings crucial to check possible rigging or manipulation during this week’s presidential and parliamentary ballot.
“Be sure, we have not been compromised and we shall not be compromised,” he told this newspaper by telephone last night. “We shall set a time when we will release the report. Let people have their opinion but we are doing the right thing at the right time.”
Considering that leaked parts of the report highlight under-age registration and inordinate variations in voter numbers, the value of the DEMGroup report would be eroded if made public after the poll, some 48 hours away, observers say.
When asked for highlights of the analysis if there is nothing DEMGroup is hiding, Mr Odoy said he was still “consulting” and would get back to us but had not done so by press time.
The shelved findings come amid reports that, in one instance, internal EC investigations found at least half a million duplicated particulars of voters in the national register.
Mr Pontius Namugera, the head of Technical Services at EC, said some voters who registered multiple times were not immediately detected for deletion through the Bio-metric identification technology, but were later identified and “quarantined” before compilation of the final roll.
Method used
EC data analysts used the textual algorithm method, combining matching a voter’s surname, first name, date of birth and geographical location of the polling station to determine whether or not an individual had been registered multiple times, he said. Mr Namugera said such characters, some identified through facial comparisons, were promptly removed.
Posted by williamkituuka.com at 9:55 PM