FROM GRACE TO GRASS: “HON.” KABAKUMBA MASIKO IS A VICTIM OF ABUSE OF OFFICE 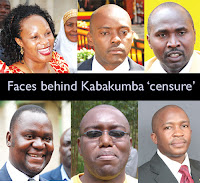 L-R: Top row - Mariam Nalubega, Medard Lubega Sseggona and Theodore Ssekikubo. Down row: Abdu Katuntu, Wilfred Niwagaba and Vincent Kyamadidi
On December 5, 14 MPs met behind closed doors in Butambala Woman MP Mariam Nalubega's office at Parliament to plot their move against minister for the Presidency, Kabakumba Masiko. This was after police announced they had found equipment belonging to Uganda Broadcasting Corporation (UBC) at the Bujenje MP's King's radio in Masindi. Kabakumba was previously minister of Information and National Guidance, thus supervising UBC operations.
During the meeting, Theodore Ssekikubo (Lwemiyaga) introduced to his colleagues what he described as a "corruption scandal" that needs to be handled "urgently".
Wilfred Niwagaba (Ndorwa East) suggested a censure move that would be calibrated by the prima facie evidence that the police had availed. After this closed-door meeting, these frontline lawmakers thrashed out a common stand, which they later revealed to the media on the same day. As the MPs pursue Kabakumba, demanding that she resign while collecting signatures to move on her, we have been told that the cabinet is not sure how to respond.
A cabinet meeting mid last week failed to generate a firm position, with the Vice President, Edward Kiwanuka Ssekandi, saying that police should get more facts about the matter before such a position can be taken and made public. This development, coupled with President Museveni's silence over the matter, has emboldened the legislators, with some suggesting that perhaps Museveni has abandoned his embattled minister.
The procedure
Meanwhile, the MPs have distributed roles amongst themselves, with Medard Lubega Sseggona (Busiro East, DP), Gerald Karuhanga (Youth Western, Independent) and Wilfred Niwagaba (Ndorwa East, NRM) charged with making sure that the proper procedure for the censure motion is followed. The trio of lawyers has the duty of drafting both the petition to the President and the motion of censure if it comes to that.
We have been told that Mariam Nalubega (Butambala Woman) is also part of this team, but her role will be to present the motion of censure. So, her learned friends have been coaching her on how best she can deliver the motion.
Censure signatures
The job of looking for signatures was given to MPs Roland Mugume (Rukungiri municipality), Vincent Kyamadidi (Rwampara), Mathias Mpuuga (Masaka municipality), Joseph Ssewungu (Kalungu West), and Gilbert Olanya (Kilak). This team has performed incredibly well, managing to gather 150 signatures within a relatively short time.
Looking for evidence
With the signatures obtained, another team of ringleaders headed by Abdu Katuntu (Bugweri) and Ssekikubo is looking for evidence. Muhammad Nsereko (Kampala Central), Hatibu Katoto (Katerera) and Florence Ibbi (Kaberamaido Woman) are the other MPs on this team.
Their role is to gather information and documents that pin Kabakumba on the stolen mast and transmitter. They will also table this evidence on the floor of Parliament in order to beef up their case. 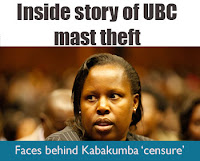 When Kabakumba Masiko was appointed minister of Information and National Guidance in 2009, one of the first things she did was demand the installation of a UBC radio and TV signal in Masindi, her home district. A knowledgeable source has told us that earlier in 2005, the UBC board chairman, Chris Katuramu, had been asked to roll out a UBC analogue signal in various places. This was a result of complaints by locals to the President during the campaigns, that they were not watching UBC TV or listening to its radio.
It is this cry, our source says, that resulted in a new transmitter being bought to replace the old ones "as a way of increasing the UBC signal for the smooth campaign of the President" in the Bunyoro sub-region. So, could this be the Shs 65 millon transmitter that was recovered at Kigulya hill in Masindi by the police recently?
According to our source, it was assumed that the transmitter was returned to the stores after UBC didn't install it in Masindi after all. It was an FM transmitter meant to re-broadcast the blue channel of the UBC radio. It's thus not clear how the transmitter left the UBC studios. The source believes there was a powerful force that influenced things.
Speaking to journalists on Friday, the Managing Director of King's Broadcasting Service (KBS), Businge Magezi, said the transmitter that has incriminated Kabakumba was in UBC's possession because it "was seized by the Uganda Police at the UBC mast site of Kigulya hill; not at the Kingís FM studio". Magezi said King's FM "only used [UBC's] transmitter when ours broke down in July this year". 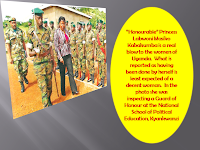 It is sad to see Masiko go the way she is to go. Those in NRM need to learn a lesson. We are in civilized times and there is need to act accordingly. There is no wrong one should do and imagine that he/she will go away with it. It is best to get lessons from the Former Prime Minister who has served in Museveni Government with no record of corruption. It is therefore true that though the climate is tempting, one can be clean. For Masiko to go the way she is going is most unfortunate; it is real falling from grace to grass. Hopefully, those in Government who have not sinned yet will avoid the terrible time when they become news makers.
William Kituuka Kiwanuka 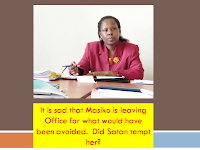 Embattled minister Kabakumba Masiko is resigning to day after fellow party legislators advised her to do so.
The decision to ask Ms Masiko resign came at an NRM caucus meeting in Entebbe.
“After listening to Ms Kabakumba’s statement the members reached a unanimous decision that she resigns,” said Mr David Bahati, the caucus vice chairperson.
Ms Kabakumba becomes the minister in Museveni’s government to be forced into resignation due to bribery allegations, since the sixth parliament. But she is the fourth minister in the current cabinet to leave office due to bribery allegations.
The others are Foreign affairs minister Sam Kutesa, The government Chief Whip John Nasasira, and Junior labour Minister Mwesigwa Rukutana who all stepped aside from their portfolio’s to allow investigations into their cases.
The minister is accused of using her influence as the minister for informational and national guidance, to acquire radio equipment belonging to UBC, a government entity.
It is alleged that the minister’s radio in Masindi, King Fm has been illegally using UBCs mast to transmit.

First, I must beg you not to forget the distinction between a kondo (a violent robber) and an embezzler of public funds.
Briefly, the kondo and the embezzler used to be hated and despised. But under President Museveni, the embezzler has become almost respectable; and with just a little more generosity than the hyena, he can score electoral victories.
I am begging; because, if the fury provoked by Hon. Kabakumba Masiko's recently discovered trick is anything to go by, she is being treated like a kondo. Used to lynching and incinerating kondos, the mob is virtually crying: "Thief... Thief... Bring her to our midst, and we will set her and all her past arrogance on fire!"
And yet, please, everything is still only an allegation. Okay, the facts (or allegations) are coming from very senior police officers, and the story carried by government media, but no court has proved her guilty.
Indeed, in Uganda's mysterious world, her guilt or innocence may be conjured to mean the same thing. After all, the lady happens to be the Minister for the Presidency, also overseeing the Capital City. And her previous docket was the Ministry of Information and National Guidance.
That is, she is not only in close proximity with the President, the fountain of honour, but also hovers above (or around) the Shs36-million-per-month-guzzling anti-mayor, a walking antidote nominally referred to as the Executive Director of Kampala Capital City Authority. You do not ride in such high places in the government of a great visionary leader unless you are up to scratch.
Anyhow, in her previous incarnation as information minister, Kabakunda must have known how weirdly stories sometimes move around within and between different media outfits. And her National Guidance brief must have included the promotion of that most sacred of virtues, patriotism, now a classroom subject in Uganda's schools.

What are the allegations?
That the mast, transmitter and other equipment used by King's FM in Masindi belong to Uganda Broadcasting Corporation, a government company; that King's FM was also illegally connected to the UBC power house; that Kings FM is owned by Masiko, and that the equipment was stolen in 2009 when the same lady was the Minister of Information.
Hah... I am glad you have not opened your mouth; it is proof that you have at last been adequately shock-proofed. You and I are not like the mob. But we can do even better and put a positive angle to what might have been horrifying events in another country.
Let us look at Hon. Kabakumba as a philosopher, a seasoned thinker who lives by a well-established doctrine, the philosophy of the pig.
Now, it is not yet proven, as I insist, but let us suppose Masiko et al stole government studio equipment and consumables worth anywhere between Shs300 million and Shs1 billion. On the scale of things in Uganda, that is rather modest. Powerful ministers, senior officials and ruling party business mafiosi cart away hundreds of billions of Shillings.
Mother of lessons: do not steal physical objects like a kondo; it provokes the mob. Instead, you should design an advanced plumbing system for removing money, preferably as undocumented bribes or commissions; get the money properly laundered, and let it flow out like a miracle from the gods. That is how a vampire works.
By contrast, the village pig devours almost whatever it can get its snout on; shamelessly voracious appetite; indiscriminate palate; from your baby's food to the filthiest rubbish heap. When eating, a cow always looks dignified; never a pig.
However, no less than the cow, the pig rewards its keeper with delicious meat.
Considering the implications of her CV, the UBC heist would seem to be shamelessly unbefitting. But King's FM probably returned some wonderful goodies, especially during the 2011 presidential and parliamentary elections; not only preaching the correct line, but singing praises of all the high and mighty. Like the pig, King's FM would have vindicated itself, which might explain the honourable lady's confidence (at least by midweek) when vowing not to resign.
Mr Tacca is a novelist and socio-political commentator.