UBOS SHOULD TAKE UP THE VOTER REGISTRATION EXCERCISE AS WELL AS THE I. D PROJECT

It is a fact that there are discrepancies in figures; a case in point is when in 2006 the Uganda Bureau of Statistics openly disputed the number of registered voters. It is common sense that NRM Government has manipulated figures over the years to achieve various intentions. However, this practice cannot go on for ever. In the process, the NRM administration has achieved in being at the leadership top in Uganda for now over 25 years. The question is: What has NRM delivered to Ugandans? The answer is debts.
Time is now to get to the drawing board and do things right as educated and visionary people. Selfish and hopeless intentions cannot drive the future of Uganda. We cannot have a currency depreciating all the time simply because a handful of people are implementing hopeless schemes. We must be seen productive given the natural resources of the country. Time has run out for those who sing hopeless songs that they fought. You fight to enrich yourself and see resources of the country looted. It simply cannot work and those who have been in the practice of this must stop. This backwardness in their practice of Government business cannot go on as Ugandans look on. Whoever loots property for Ugandans will at some moment in time pay back.
In the meantime, Government should have projects to do with population figures like the voter register, the National Identity cards done by one Government department which will ensure that all the figures are consistent. We are feed up of stupid figures, the registering of non - Ugandans to vote, name them.
The duty is ours to clean the mess the 25 year old NRM has cause to the country and its future.
William Kituuka Kiwanuka 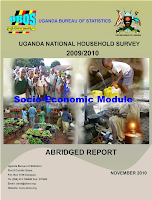 NATIONAL ID SHOULD BE INDEPENDENT
Written by Editorial
Sunday, 24 April 2011 17:32
The Immigration and Citizenship Directorate has announced that the first batch of the long-awaited national identity cards is ready for distribution.
It has also been reported that the ID cards will be officially launched on May 12 by President Museveni during his swearing-in ceremony at Kololo Airstrip in Kampala. According to the minister of state for Internal Affairs, Matia Kasaija, there is a plan for the President to distribute the IDs to other top government officials present.
German firm, Mühlbauer Technology Group, is behind the controversial Shs 185bn project which it embarked on in the run-up to the just ended general elections.
A ministry of Internal Affairs delegation told Parliament’s Defence and Internal Affairs committee last week that after the President and other top officials have been served, national IDs will be given to the people registered as voters by the Electoral Commission last year.
The idea of national IDs is noble and has been on the cards for such a long time. However, merging the ID project with the bio-metric voter registration system, as the government has sought to do, is problematic.
Besides, our view is that seeking to politicise the project by launching it on President Museveni’s swearing-in is ill-advised.
It is a fact that a lot of Ugandans, either out of apathy, cynicism, lack of trust in the electoral system, or any other reason, do not participate in the country’s electoral processes. Therefore, using the voter register as a benchmark for national IDs will exclude these citizens.
In addition, voter registration in Uganda is a highly contentious issue and politicians never seem to agree on how many genuine voters are therein. Integrating the national ID project with such a discredited system will no doubt raise serious credibility issues for the former.
To protect its integrity and keep it free of politics, the national ID project should be handled independently.
In fact, with adequate support, the Uganda Bureau of Statistics (UBOS) could have done this at a reasonable cost. As it is now, a lot of money is being spent on a project that not many people will have faith in.

ELECTORAL COMMISSION ANNOUNCES 13,954,129 VOTERS
The Uganda Electoral Commission has announced that a total of 13,954,129 Ugandans have been registered to vote in the 2011 general elections.
The Electoral Commission Chairman, Eng. Dr. Badru Kiggundu says the national voters register is complete and all polling stations have been issues with their respective voters registers.
He says despite concerns from several stakeholders over the none issuance of voters cards to some registered voters, the electoral commission will allow all people who are registered to vote.
Kiggundu says only registered voters will be allowed to vote at the polling station where they are registered, and this shall include persons whose particulars and photographs appear on the National Voters’ Register, whether they have a Voters’ Card or not, as per Section 34 of the Parliamentary Elections Act, (as amended).
He says according to Section 35 of the Presidential Elections Act (as amended), a person who has a Voters’ Card and whose particulars appear on the National Voters’ Register, but whose photograph is missing, shall also be allowed to vote, after proper identification.
The Electoral Commission in a press statement says non issuance of voters cards is due to the fact that all regiered voters are going to be given National Identity Cards under another government project currently being run by the Ministry of Internal Affairs.

Dr. Abed Bwanika
The President of the People’s Development Party, Dr. Abed Bwanika who is competing in the presidential elections says the opposition cannot trust the results of elections where voters have no voters cards. He says this will open room for all people; include underage and foreigners to vote.
Other opposition leaders like Dr. Kizza Besigye of the Inter party Colaition/ Forum for Democratic Change says the over 14 million voters on the register is an inflated number given that Uganda has an estimated population of 32 million people, 51% of whom are below 15years.
But Kiggundu insists that the national voters register is accurate and population estimates are not accurate like the voters register which resulted from nationwide system registration of people for the voting exercise in 2011
Posted by williamkituuka.com at 10:55 PM