IF PRESIDENT MUSEVENI DECIDES NOT TO STEP DOWN IN 2016, THE BEST WILL BE NOT TO HOLD PRESIDENTIAL ELECTIONS 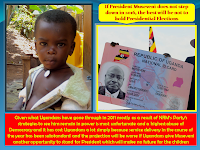 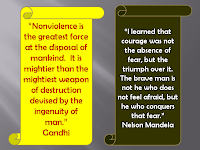 Time is ripe for the people of Uganda to play mature politics for the good of the future mostly for the young children. We should not sit back as a clique of people decide to get the country off track by doing whatever they wish as the country’s future is put in big danger. What we have gone through in 2011 as a result of the NRM Party strategies to see Museveni in power is evidence enough of what can be expected come 2016 General Elections. We are suffering simply because many of the people entrusted to seeing to the destiny of the country are simply eating and they leave the matters just to God! We need to see a future to the country supposed to be the pearl of Africa which is raped due to ill advised policies as well as corruption.
The cost the people of Uganda have had to pay which cost no one can surely tell how long it will stay is evidence enough that if the person responsible for the distortion is not ready to leave of his free will if the party cannot convince him to, then it will make a lot of logic to let him just remain in office and instead have elections for other positions. That will make better elections. We have to go through this type of experiences given the mistakes we keep making. Those who sponsored the NRM revolution can at this time surely see that Uganda would be far without their revolution which has turned the country on a backward trend with a lot of uncertainty for any future worth talking about.
William Kituuka Kiwanuka
VOTER BRIBERY: A NEW CORRUPTION IN UGANDA COURTSEY OF NRM
On 18 February 2011, Uganda held its second presidential election since the introduction of a multiparty system in 2005. The incumbent President, Yoweri Kaguta Museveni, was re-elected for another five-year term in a hotly contested election. Museveni has led the people of Uganda for the last 25 years, having been in power since 26 January 1986. The election campaign, though generally peaceful, was termed by various observers and the opposition as having been characterized by voter bribery, uneven campaigning opportunities, intimidation through the use of state security forces, unprecedented extravagance on the part of the ruling party (NRM) and vote rigging.

Beatrice Anywar Atim, the incumbent Woman Member of Parliament for Kitgum, claims to have evidence that National Resistance Movement members held meetings to distribute bribes to voters in Kitgum town.
Anywar, who is contesting to retain her seat in parliament, says the bribery occurred in Padwong Parish. She says the NRM members were dishing out huge sums of money to induce people to support them in today’s elections.
Anywar says she informed the police of the matter. The police say no action was taken because they could not locate the bribers.
Posted by williamkituuka.com at 1:53 AM