Barbaric Law? Executing someone for having sex!

It is so backward a practicethat someone can be facing execution because he was caught having sex with someone's wife. At least this backwardness has to be-revisted. it wrong to think that one can have a right to execute another,whether he be a king or what. We must move away from such backwardness.
William Kituuka

Red mist for polygamist Swazi king as wife No 12 'caught in bed with his justice minister friend'
By Mail Foreign Service - Source: http://www.dailymail.co.uk/news/worldnews/article-1299884/Scandal-12th-wife-Swaziland-king-caught-married-lover.html
Last updated at 7:48 PM on 3rd August 2010
In the strange landlocked African kingdom of Swaziland, subjects must ensure they do not dishonour their monarch.
That rule goes for King Mswati III’s 13 wives as well.
And, despite shunning monogamy himself, he was in no mood to tolerate claims that his 12th spouse may have also enjoyed sharing her love with more than one partner.
He was unhappier yet when the man said to be having an affair with his beauty queen bride Mswati Nothando Dube was none other than his own justice minister and friend Ndumiso Mamba. 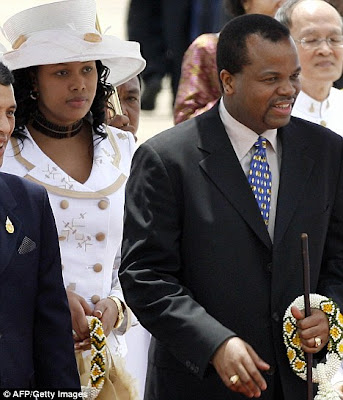 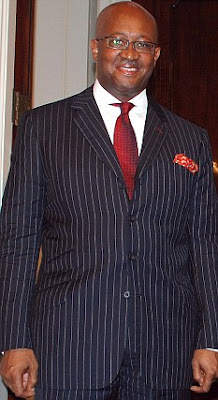 Facing execution: Swazi justice minister Ndumiso Mamba was allegedly caught in bed with Miss Dube in a hotel room
Instead, journalists there have been told to focus on the honorary degree awarded to the monarch during his current visit to Taiwan.
However, this has not stopped reporters from neighbouring South Africa exposing the scandal. 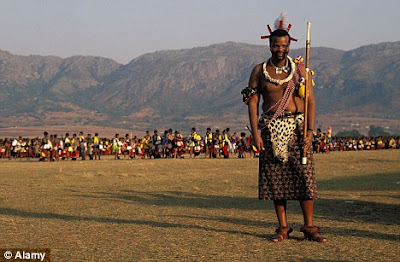 If convicted of the rather odd-sounding charge of ‘trespassing into another man’s home’, married Mamba, who was once a close friend of the king, could be executed.
While Miss Dube, a mother of two who got engaged at 16 after taking part in the annual pageant of thousands of topless Swazi virgins, could be banished from the kingdom.
The two were arrested at the Royal Villas hotel in a town near Mbabane, the country capital.
As is the custom in the tribal state, the monarch’s mother, who shares his power and is known as the Indlovukazi, or Great She-Elephant, sent a delegation to Mamba’s village to press charges.
Political commentators told the Daily Telegraph the alleged affair was '’common knowledge’.
Miss Dube first caught the king's eye at the annual Reed Dance six years ago.
Inkhosikati LaDube, as she became known, bore him a daughter within a year and a son soon afterwards.
High chieftain: Mswati III rules as an absolute monarch and enjoys lavish parties
High chieftain: Mswati III rules as an absolute monarch and enjoys lavish parties
Pick of the nation: Some of the 50,000 young, half-naked Swazi women at the annual Reed dance where Miss Dube was picked as a wife six years ago 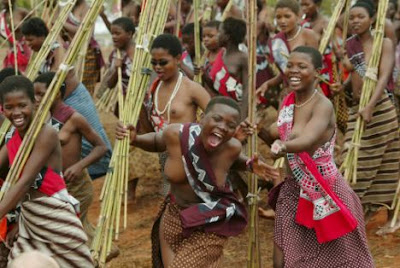 Pick of the nation: Some of the 50,000 young, half-naked Swazi women at the annual Reed Dance pageant where Miss Dube caught the king's eye six years ago
British-educated King Mswati III, who is also known as ‘ngweyama’ or the lion, has ruled Swaziland since 1986.
The country, which also borders Mozambique, has one of the highest Aids rates in the world, with an estimated 40 per cent of the population is HIV positive
Also, 70 per cent of the people live below the poverty line.
The king, who rules as an absolute monarch and appoints the prime minister and cabinet, enjoys many lavish parties and the trappings of luxury.
His birthday on April 19 is regularly celebrated in front of thousands in a stadium where expensive gifts are presented to him on behalf of his people.