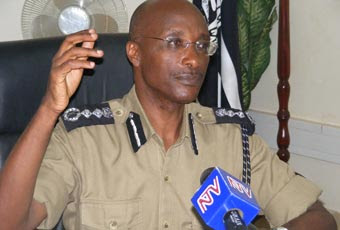 Police boss Kale Kayihura
No bribe? Don’t expect service at URA, police, UMEME, Mulago
If you plan to seek the services of the Uganda police, prisons service, Mulago Hospital, any court, or UMEME, be warned – you must be ready to bribe.
According to the East African Bribery Index, a governance tool developed to measure bribery levels in the private and public sectors in the region, no service is offered in these places unless a bribe is offered.
The index registers the firsthand experiences of the residents of the region with regard to service delivery and corruption. It seeks to establish the extent of bribery by seeking information on where the respondents were asked to pay bribes, if they acceded to bribery demands and the amount of bribe paid.
The Uganda Revenue Authority (URA) is slightly different than other national services
surveyed. Not many bribes are paid there but when they are, they are quite big. For example, according to the survey, police tops the list of institutions where one is expected to bribe, but the money involved, Shs 56,000 is relatively small compared to the average Shs 1,100,000 bribe at URA. 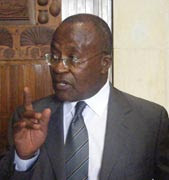 Ethics minister Nsaba Buturo
The survey interviewed people in the East African Community member states of Uganda, Kenya, Tanzania, Rwanda and Burundi. Respondents were asked about the purpose of the bribe, how often bribes are demanded, paid, reported to the authorities, the amount of money exchanged, and their perception on how pervasive bribery is. The findings were then aggregated to rank the country and institutions with the highest rate of bribery. The survey was carried out by Transparency International, an anti-corruption watchdog.
In Uganda, URA was found to be the institution with the highest aggregate index of all indicators, which means it performed worst on the bribery index. It replaces the Uganda police, which was worst in the survey last year, but moved up to the second worst position this year. Regionally, Uganda is the second worst performer on the bribery index after Burundi. 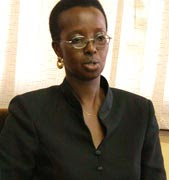 URA boss Allen Kagina
Rwanda is by far the best performer with a corruption prevalence of only 6.6 percent. The second best performer, Tanzania, has a prevalence of 28.6 percent. Uganda, Kenya, and Burundi have bribery prevalence of 33 percent, 31.9 percent, and 36.7 percent respectively.
The report does not provide much information about why there is so little corruption in Rwanda. However, it shows that the Rwandan Ombudsman enforces the government’s zero tolerance against corruption. It regularly exposes cases of fraud, malpractice and corruption at the top, middle and bottom levels of the public sector.
In 2009, the Finance Director at the Presidency of Rwanda was suspended from office and sentenced to four years in prison following corruption allegations. He was also fined more than one billion Rwandan Francs(US$ 1.72 million). A former top civil servant in the Rwandan infrastructure ministry was given a similar fine and was sentenced to seven years in jail for involvement in corruption-related offences related to government contracts. Over 20 of the 30 district mayors in Rwanda were removed from office for alleged mismanagement. 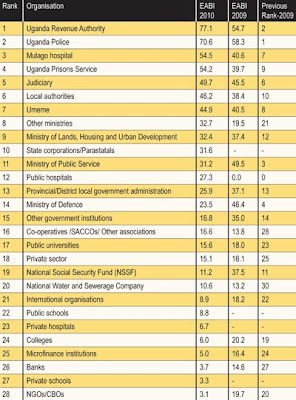 Aggregate for top corrupt organizations in Uganda
Moreover, in Rwanda, the Ombudsman’s office is responsible for reviewing the revenue declarations submitted by top government officials including the president. Compare that to Uganda where relatively low ranking offenders are arraigned before the anti-corruption court and convictions, even in the most glaring cases, are rare.
In Rwanda only 6 percent of respondents said that they had actually paid a bribe. For this reason, the compilers of the report wrote: “With these limited numbers of reported bribery incidents, the index for Rwanda could not be formulated. The responses of the general perceptions on the corruption trends, both present and future, further builds on the plausibility of this outcome. No other East African country registered high optimism in corruption perceptions compared to Rwanda.”
A common new form of corruption used by top
government officials in Uganda involves delaying the execution of services to create a crisis that, in turn, necessitates urgency and justifies the waiving of the
prescribed procurement procedures. This was the case during the Commonwealth Heads of Government Meeting (CHOGM) in 2007 where colossal amounts of public funds were stolen in hurried procurements.
Source Transparency International East African Bribery Index(EABI) survey
“It is clear that the anti-corruption legislations in Uganda have had little impact thus strengthening the cause to review them,” says the report.
The government’s point man in the anti-corruption fight, Minister for Ethics and Integrity, James Nsaba Buturo, gets defensive when presented with the figures.
“The problem I have with Transparency International’s surveys is I don’t know what safe way they use to arrive at these figures and comparisons,” he says.

Chart showing reasons for not reporting bribery
But Jasper Tumuhimbise, an anticorruption activist, has no doubt about the malaise. “Uganda might top the region in next year’s survey because of the new revelations from the CHOGM and NSSF probes by parliament,” he says.
Tumuhimbise adds that Uganda ranks high on corruption because in spite of the numerous anti-corruption laws and institutions, there is lack of political will to fight the vice.
In fact, apart from Rwanda, all governments in the region appear to lack the will to fight corruption. As a result, most citizens do not even bother to report the vice. Although, on average, up to 80 percent of respondents perceive their country to be either corrupt or extremely corrupt, only an average 7 percent of cases are reported. At 41 percent, Uganda has the highest number of respondents saying they do not report bribery cases because “no action will be taken”. It also has the highest number of respondents, 53 percent, saying bribery is likely to rise. In worst-performing Burundi, however, only 17 percent believe it will rise.
Stuffing the Uganda Police and URA with government cadres appears to have made the situation worse.
Even Buturo admits that corruption is a major challenge for Uganda. “If we don’t do something it will hurt all of us.”
By Rehema
Kampala,East Africa
When the boot of government is on your neck,it doesn't matter if it's left or right. Today is Buganda, tomorrow is some one else.
Posted by williamkituuka.com at 1:25 AM