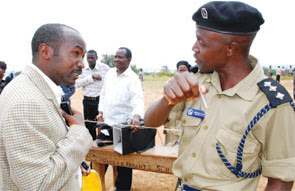 Ssekikubo arguing with Okwi during the NRM polls in Sembabule on Monday. Okwi is now on suspension

For the likes of Ssekikubo, they thought that NRM was for all of them equally not knowing that this belongs to some people where others are fluckers. Ssekikubo is learning but a bit late.
William Kituuka

By Steven Candia,
Eddie Ssejjoba
and Madinah Tebajjukira
LWEMIYAGA county MP Theodore Ssekikubo was yesterday arrested in connection with the violence, which disrupted the NRM elections in Ssembabule district on Monday.
“He has been arrested in connection with the events that occurred in Ssembabule district on Monday,” Police spokesperson Judith Nabakooba said yesterday evening.
When Ssekikubo presented himself at the criminal investigations directorate (CID) headquarters in Kibuli, late in the evening, he was detained.
Just hours before, Police chief Maj. Gen. Kale Kayihura had warned of tough action against him over the matter.
By press time, Ssekikubo was still at the CID headquarters, and was due to be transferred to Masaka, the district in which he allegedly committed the offence, and where he is likely to stand trial.
Moments before the arrest, the MP, who is not new to controversy, had travelled from his constituency to the CID headquarters escorted by a lawyer.
Speaking earlier in the day, Kayihura said no one was above the law and vowed to prosecute the legislator. Also to be prosecuted, he said, are the policemen involved in the shooting incident in the district and the RDC of Kasese, Capt. James Mwesigye, for their role in the fracas.
Kayihura made the comments at a breakfast meeting with editors of various media houses at Hotel Africana in Kampala yesterday.
The Ssembabule district Police commander, Stephen Okwii, has been suspended for failing to control the situation, Kayihura noted.
He said Ssekikubo had no right to interfere with the elections and wondered how the DPC could just look on as the situation deteriorated.
“He should have detected that Ssekikubo was coming with a group and should have been able to prevent the commotion which he did not do,” Kayihura said.
He argued that though Ssekikubo’s group got to the polling centre, the DPC should have used the anti-riot Police to disperse them.
Kayihura said they were investigating the origin of the firearm that the MP had since his civilian firearm had been withdrawn over misuse.
Early yesterday, the MP said he had been preparing to report to the Parliamentary Police this morning. “I will abide by the Police’s request. I will give a full account of what transpired at the scene which resulted into bloodshed,” he said.
However, he added, the problem of Ssembabule should be resolved within the party organs.
According to Ssekikubo, voting for NRM LC5 chairpersons in Ssembabule was called off until today, as a result of the clashes between his supporters and polling officials.
He said Ssembabule has two counties, and since Lwemiyaga had not participated, one county could not vote independently.
Asked for a comment, RDC Mwesigye welcomed the probe, but denied involvement. Although he was in the district at the time, he explained that it was because he had a case coming up in court.
Mwesigye argued that because the polling station was near the court, when chaos flared up, he walked out of court to catch a bit of the action.
“That is why they mistakenly think I had a hand in this ordeal.”
“Although the pistol could be that of his bodyguard, how did it end up with the MP?” he asked.
“After disarming him, he came back pleading that his life was in danger. We gave him a body-guard, armed with an AK 47 rifle,” Kayihura said.
Posted by williamkituuka.com at 1:41 AM