Binaisa was able to rule drom hate to love because he did not take Ugandans for granted. He knew he was hated on being sweared in as President, he then worked hard to show that he was ready to meet the challenge and in so doing he became adarling of many, to the extent that during his time Ugandans tested the real freedom of press among other things. I just wish Uganda could get another leader like QC.God bless his soul in eternal peace.
William Kituuka By Herbert Ssempogo
and Joyce Namutebi
FORMER President Godfrey Lukongwa Binaisa has died. The 90-year-old passed away in his sleep at his home in Kizungu Zone, a leafy, quiet area of Makindye, a suburb of Kampala.
He passed on between 3:00am and 6:00am yesterday, his nurse said. The man who led Uganda from June 20, 1979 to May 12, 1980, had diabetes.
Binaisa becomes the second former Ugandan president to die in the country. The other was Gen. Tito Okello Lutwa, who ruled from July 26, 1985 to January 26, 1986, when Predent Yoweri Museveni took over power.
Binaisa’s family, according to their lawyer Erias Lukwago, wants him buried at Kololo where two other decorated heroes, Prof. Yusuf Kironde Lule and Ignatius Musaazi, are buried. Lule was Binaisa’s predecessor and the first chairperson of the National Resistance Movement.
Musaazi founded the first national political party, the Uganda National Congress, in 1952.
Lukwago said he will move a motion in Parliament to have Binaisa buried in Kololo. “I have discussed the matter with the Speaker,” he said.
Issa Kimera, a nurse from Bedside Services, which cares for the elderly, said Binaisa had lately been happy. He went to bed at about 7:00pm after supper. “As a routine, I went to check on him at three in the morning. He lay in his bed face up,” Kimera recalled.
“Are you ok?” Binaisa, a lawyer, asked Kimera, who responded in the affirmative. “Where is my Nalongo?” he inquired in reference to Kimera’s colleague, Christine Naguddi, who took care of him in daytime.
NAkimera informed Binaisa that Naguddi would report for duty later. The former head of state then went back to sleep. It was the last time he spoke to the nurse.
Kimera woke up at 6:00am, prayed and proceeded to Binaisa’s room. Something was wrong, he sensed.
“He lay in the same posture where I left him at 3:00am. I touched him. His right side was cold. There was no life. I called his daughter Nakalema and Dr. Mayanja.
Before he breathed his last, Naguddi disclosed, Binaisa’s condition was not good. It was why they had taken him to Dr. Mayanja’s Victoria Medical Centre in Kampala on Monday. He was scheduled for a second visit yesterday.
The body was transported in an ambulance to Mulago Hospital yesterday for a post-mortem examination.
“It is God’s decision. There is nothing we can do about it,” Nakalema, who fought back tears, said.
His niece, Hajati Sarah Bagalaaliwo, described Binaisa as “an honest, people person who worked for the nation diligently”.
Amos Lugolobi, a neighbour, remembered him as a good friend with whom he discussed development issues.
“He had too much information about Uganda. I hope someone cared to archive it somewhere because it was beneficial to the current generation,” Lugolobi told journalists.
The area defence secretary, Ibrahim Bageya, recollected that Binaisa once contributed sh500,000 to the tarmacking of a road in the area. He also paid two security guards’ salary for six months at sh40,000 per month each.
“He told us that being a president was stressful. He said managing the army was very hard,” Bageya recollected.
Binaisa idolised President Yoweri Museveni for managing the army, he said.
The Government said Binaisa died of cardiac arrest. A State funeral was being arranged, Fred Opolot, the head of the Media Centre, said in a statement yesterday.
At Parliament, deputy Speaker Rebecca Kadaga announced the death to the few MPs who attended the morning session.
“With regret, I inform you of the death of the former President of Uganda, Godfrey Lukongwa Binaisa,” she said.
“We passed a law on the death of past leaders. I trust the Government will get in touch with the family. For now, we observe a minute of silence in his honour,” Kadaga said as MPs rose to their feet and bowed their heads.
Outside the chambers, Prime Minister Prof. Apolo Nsibambi hailed Binaisa for leading the country at “the most difficult of times when the army was indisciplined”.
He said he did not wage war against the Government when he was deposed after he tried to shuffle the army.
“He was humble, sociable and gregarious,” Nsibambi remarked.
“When he left the highest office, he went to the UK and practised law. He was a Queens Counsel, the highest rank of law under the Commonwealth.
“He showed that when you occupy the highest office, when you leave, you can do something else.”
Several years after the death of his first wife, Binaisa in 2004 married a Japanese woman, Yamamoto. But the fairy-tale marriage collapsed in 2005. Binaisa is survived by six children, four of whom are based outside the country.
Late in the afternoon yesterday, Binaisa’s home was quiet except for the many senior Police officers who had camped there.
Among them were the Mobile Patrol Unit chief, Christopher Abache, the Kampala South boss, Moses Kafeero as well as the acting commissioner of traffic and road safety, Basil Mugisha.
At a glance
Born in 1920 to Canon Ananiya and Naome Binaisa
Studied at Makerere College School and Kings College Budo
Qualified as a lawyer in UK in 1955
Became a member of the bar at Lincoln’s Inn in 1956
Joined UNC, UCP and later UPC between 1955-1962
Named Uganda’s first Attorney General in 1962
Helped create the 1967 Constitution
Left government work and started a law firm in 1969
Went into exile in 1972, after Obote was overthrown by Amin
Worked as lawyer in London and US between 1972 and 1979
Returned to Uganda after Amin was overthrown in 1979
President of Uganda in June 1979
Lost the presidency in May 1980 after 11 months in the office
Went back in exile in the US until 2001 when he returned
Married Japanese woman, Yamamoto in 2004 and separated with her in 2005 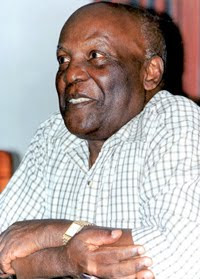 Former Ugandan President Godfrey Binaisa died in his sleep on Thursday August 5 at his home in Makindye – a Kampala suburb at 90 years.
Family sources say he suffered a stroke earlier this year and has not been feeling well since then. The source added that the government was assisting with the burial preparations and would be having a meeting in a short while.
Binaisa served as Provisional President of Uganda and Attorney General in the post independent government of Uganda of the 1960s.
He was born on 30 May 1920, appointed Queens council(QC) in 1956 and practiced law in Kampala before freeing the country when Amin took over power.
Following the overthrow of Idi Amin in 1979, Binaisa returned to Uganda. After Idi Amin, Yusuf Lule served as the interim president before Binaisa replaced him. Binaisa was on June 20, 1979, appointed President of Uganda by the National Consultative Commission, which was then the supreme governing body of the Uganda National Liberation Front.
The Military Commission, UNLF, headed by the Paulo Muwanga whose deputy was Yoweri Museveni (then leader of Uganda Patriotic Movement), later overthrew him, on 12 May 1980.
The Presidential Commission of Uganda with among others Paulo Muwanga, Yoweri Museveni, Oyite Ojok and Tito Okello led the country until the December 1980 general elections.
Binaisa had joined, and was made vice president of the Uganda Patriotic Movement.
However, when Milton Obote’s UPC won the elections, the results were disputed, leading Museveni to launch a guerilla rebellion, which subsequently led him to gain the presidency in 1986.

On Wed, 20 Jan 2010 04:33:26 -0800,I wrote that 90 year old Former President Godfrey Lukongwa Binaisa Q. C needs our prayers. Q C is credited for having ruled Uganda from hate to love. Actually, apart from the Late Prof. Lule; he is the only president of Uganda who left at a time when many had hope. Probably the freedom of speech at his time will take long to be matched given our design of democracy. He ruled the country at probably one of the most difficult times when there were foreign troops in the country and it was not clear who actually was in control as some people took the opportunity to kill Ugandans as if they were killing pigs, insecurity was at its highest.
It is surprising that Godfrey after being put in house arrest at Entebbe had the guts to join Yoweri Museveni’s Uganda Patriotic Movement (UPM). Not long after the liberation of the country Q C left and he became a real critic of Museveni’s Government. However, Q C eventually came back to the country and is the only former President who is alive!
Given advanced age, Godfrey is battling to stay alive and in the circumstances he needs all our prayers.
Willy Kituuka