Cheating to pass exams is a reality; Government has to act 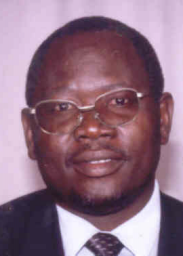 IGG Raphael Baku
Cheating to pass examinations is a reality and Government of Uganda has to act fast to see this end. It is unfortunate that not enough is being done in this field. Why is Government reluctant to call upon witnesses to the effect and if possible pay them. While everything goes to the dogs, Government MUST ensure that exams are passed by those who have the ability.
William Kituuka

Exam Malpractices - IGG Wants Implicated Teachers Deregistered
9 August 2010
The Inspector General of Government has recommended that all teachers and head teachers who aid students during examinations, are dismissed.
Mr Raphael Baku said many teachers have been implicated in exams leakages but continue hold their positions. He said external assistance, which is the major form of malpractice accounts for about 81 percent of all misdeeds. "Head teachers, invigilators or teachers whose students are found to have cheated or been assisted in an exam be held accountable on evidence of cancelled results," Mr Baku said.
"Uneb management informed the study team that in some cases they submit head teachers and teachers involved in examination malpractice to ministry of education for deregistration through the teaching service disciplinary procedures, but there is no case on record to have been submitted to the ministry for a period prior to 2009," he added The IGG also wants the Uganda National Examinations Board (UNEB) to change examiners every five years to avoid being compromised by head teachers .
"Examiners should be changed every five years on a rolling basis except in exceptional subjects where examiners may not be available," Mr Baku recommended. These recommendations are contained in the IGG's report into the effectiveness of measures instituted by UNEB to control malpractices in examinations.
The report launched in Kampala last week was initiated by the ombudsman's office to identify loopholes in Uneb control systems and advise on how to seal them. The study reviewed the examination process - from registration to release of results - in respect of primary, ordinary and advanced levels over the years 2004 to 2007. Mr Baku said Business and Technical examinations were not considered in the study because they attract fewer cases of malpractices.
Last year, exams of 2,812 pupils and students were cancelled over alleged involvement in malpractices. This year's exams are expected to start mid October with 264,000 students sitting their O' level examinations.
A total of 519,082 pupils will later sit their Primary Leaving Examinations in the first week of November followed by 103,675 students who will write their Uganda Advanced Certificate of Education examinations. Mr Baku warned that if the increasing cases of exam malpractices are not checked, the country is destined to get further thieving public servants.” It is viewed that a student, who progresses in his academic pursuits through cheating, will grow into a corrupt adult even after his studies," he said. "The aggregate of all this is a corrupt and incompetent future workforce in the country."
UNEB chairman, Prof Lutalo Bbosa said the powers to punish culprits lies with the ministry. He said the examination body always puts measures to curb exam malpractices but 'unscrupulous characters' have continued to beat the system.
He however welcomed the report saying it would help them eliminate the vice. "These are good recommendations and we are going to study the report so that we improve the system," he said Uneb is a semi-autonomous agency that administers final papers for primary, secondary and vocational institutions. The government recently directed UNEB to relax requirements for Senior 4 candidates in a bid to contain likely pressure from beneficiaries of the USE programme.

IGG wants UNEB to use CCTV cameras in curtailing examination malpractices
The Inspectorate of Government has recommended to the Uganda National Examination Board to install CCTV Camera’s as way of cutting down the levels of malpractices in national exams at Primary Leaving Exams, Uganda Certificate of Education and Uganda Advanced Certificate of Education.
This comes hardly three months ahead of the annual national examinations that will begin in October with the Uganda Certificate of Education exams officially beginning at around that time.
While presenting a study carried out by the Inspectorate of Government on the effectiveness of the measures instituted by UNEB to fight the examination malpractices at the Uganda Media Center the Inspector General of Government Raphael Baku has said UNEB should consider using CCTV cameras in places where it prints exams from.
IGG Raphael Baku
The IGG has also made other recommendations like the idea of having UNEB change setters, examiners and moderators who deal with examinations every five years as a means to ensure that more teachers are involved in the moderating and setting of these exams as this will curtail on the possibility of examiners setters and moderators aiding examination malpractices.
Though UNEB has largely embraced these recommendations of the study it has however declined to embrace the aspect of changing examiners, setters and moderators of exams every five years.
The Chairman of UNEB Prof. Lutalo Bossa has told journalists that it would not be practically advantageous to change the examiners, setters and moderators because some examiners, setters and moderators do their work well and it would therefore be simply unreasonable to take them off their jobs just for the sake of it.
Some of the key aspects that the office of the IGG noted to be key causes of examination malpractices are the lack of integrity and professional ethics, the rural- urban gap in education where by many schools in rural areas are largely ill prepared for exams compared to their urban counter parts and the commercialization of education in Uganda.
Many people will be watching to see how far the IGG can go in trying to assist UNEB fight malpractices an evil that dates as far back as to the days of the East African Examinations Council in 1971 when O and A level exams were said to have leaked in Kampala, Jinja and Mbale. These Malpractices have continued to grow largely to date number of forms in Uganda.
By Tiberindwa Zakaria, Ultimate Media. 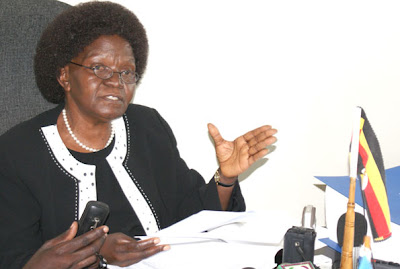 Minister of Education Hon. Geraldine Bitamazire at the Ministry of Education Offices during the release of the 2009 Uganda Certificate of Education results in Kampala. PHOTO BY ISAAC KASAMANI
Uneb given month to list cheats
Kampala
Uganda’s examination regulatory body has been given a month within which to bring to book teachers who have been accused of involving in malpractices. The directive comes after it emerged, due to examination malpractices, many students will not be going on to the next level of education.
The Minister for Education Namirambe Bitamazire insisted the Uganda National Examination Board (UNEB) must investigate and hand over names of those involved in malpractice for disciplinary measures.
She announced the measure after she officially received the 2009 Uganda Certificate of Education (UCE) results from the UNEB secretariat.
The list of schools with nullified results and those with withdrawn centre numbers was revealed by the UNEB Executive Secretary Matthew Bukenya in a press briefing during the release of the results on Thursday, February 4 at the Ministry’s headquarters in Kampala.
Five secondary schools have also had their examinations centre numbers withdrawn by the Uganda National Examinations Board due to poor management while 15 others had most of their results cancelled due to exam malpractice.
The five schools include Dynamic SS Sonde (centre number: U1526) and Spire High School, Gayaza (U1983) both in Wakiso, St Joseph’s SS Butenga (I1811) and St Henry’s High School (U1301) in Masaka and Namataba SS Lugazi (U0672) in Mukono.
Budinse Memorial SS in Mpigi had the results of 40 of the 41 candidates who sat the exams cancelled while Green Valley College in Yumbe had 130 candidates’ results out of 143 nullified.
Wakiso District had results from six schools cancelled, the highest number of those named, although schools with fewer than four cases have not been listed. UNEB also said that no exam leakage was reported this year.
Most malpractices were recorded in science subjects with Physics topping the list followed by Biology, Chemistry and Mathematics.
Some of the deregistered schools are accused of offences like not remitting exams fees to UNEB.

Uganda: UNEB Toughens Exam Regulations
19 October 2009
Kampala — SENIOR Four examinations kicked off yesterday with tougher conditions set for invigilators and teachers to avoid malpractices. Over 200,000 students are sitting for the examinations.
The Uganda National Examinations Board (UNEB) ordered that question papers leave Police custody 30 minutes before the examinations begin.
Previously, all batches of exams of a given day were given to the school in the morning.
UNEB spokesperson Eva Konde said: "This is being done to reduce cases of malpractices. Some schools would open the examinations envelopes before the set time. We have now altered the system to close these loopholes."
The national examinations body is also working with the Police and other security organs to ensure that the examination goes on uninterrupted, she said.
Yesterday, several uniformed and non-uniformed officers were seen monitoring the transportation of the exams in different parts of the country.
The exams started with minor reports of late deliveries in the West Nile.
Arua district experienced a heavy downpour, which slightly delayed the delivery.
The situation was better than last year when some examination centres in western Uganda received examination papers two hours after other schools had started.
A considerable number of Sudanese students are also sitting the exams.
In Anyfio Role Model SS in West Nile, of the 99 candidates, 77 are Sudanese.
In the central region, exams kicked off well.
Masaka district Police commander Moses Mwanga said the first two examinations "had perfectly been handled."
Some teachers in Mityana district complained that 30 minutes to transport exams from the Police to examination centers was too little.
Katakala Secondary School's Michael Kibuule said the time was too little for them to get organised.
Joseph Kawuki of MUMSA High School also appealed to UNEB to revise the time, saying about 45 minutes was needed to transport the exams.
In the west, 82 candidates of Uphill College in Bushenyi district are to trek 10km to a community examination hall.
The school was involved in examination malpractices in 2007 and its centre was cancelled by UNEB.
It was the first school in the district to get its centre withdrawn over examination malpractices.
There were reports that two schools in Soroti district had stopped fees defaulters from sitting the exams.
The district education officer, Michael Oumo, could not confirm the reports.
Posted by williamkituuka.com at 1:24 AM