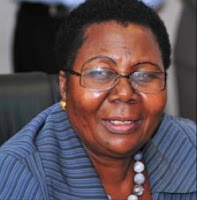 Minister Bbumba
The Government of Uganda should be sincere if it is to help the poor people. It is true that some of these people have homes but are in poverty and if community initiatives were real in the country, the communities would take on the role to care for these people. Some of these have land but no body is there to help them grow food or even see to better utility of their land. For those who have no homes worth talking about, it is not a big deal building homes for them within the localities they are in and looking after them. Shs 23,000 is simple change that one is expected to have in a pocket to survive just a day in Uganda. The money will be simply a drop in the ocean. The elderly have health problems and Uganda is yet to have assurance of giving free medical services, such that even if shs 23,000 went to medical alone, it would not do a thing to improve the welfare of the elderly. It is better to come up with a package that is not simply politicking but which will surely give hope to our old people to have decent lives.
William Kituuka Kiwanuka.

ELDERLY TO GET MONTHLY PAY
Posted by Nicolas Kostov

on Sunday, July 10 2011 at 00:00
Donors have given Shs67 billion to Ugandan for the implementation of a social protection programme. The scheme aims to reduce chronic poverty and improve life chances for the poor.
Ms Syda Bbumba, the Minister for Gender, praised the initiative saying: “This social protection programme represents a milestone in addressing chronic poverty.”
Under the ‘Expanding Social Protection Programme,’ beneficiaries will receive Shs22,000 per month to help with their living expenses.
The programme will initially target six sub-counties spread across Kiboga, Kyenjojo and Kaberamaido districts. Ultimately, it aims to reach 600,000 people in 14 districts.
Two types of grants will be awarded. The first is the Senior Citizen’s Grant and will be given to all people aged 65 and above living in the targeted areas.
The second is the Vulnerable Families Support Grant which will go to households deemed most in need. Mr Stephen Kasaija, head of the Social Protection Secretariat, told the media that the economic criteria is scientific and clear.
Age, sex, disability and orphanhood status will all be taken into account. This social protection scheme was conceptualised back in 2004 and, if successful, will be the first of its kind in Uganda.
Similar schemes have been implemented in several other African countries including South Africa, Botswana and Lesotho.
The initial five years of the programme will be funded by DFID, Irish Aid and UNICEF. Financial responsibility will then pass to the government.
The first payments are due to be made in August.

Ultimate Media
Government is set to launch a pilot project of its social protection program for the elderly.
The move is aimed at improving the well being of the elderly persons.
The ministry of Gender Labor and Social Development will on Friday sign a memorandum of understanding with some districts for the implementation of the Social Assistance Grant for empowerment of the elderly.
Addressing journalists at the Media Center today, state minister for the elderly Sulaiman Madada said under this project, the government will also start paying out the monthly upkeep allowance of 22,000 shillings to the elderly.
Madada says the pilot project will be carried out in the districts of Kiboga, Kyenjojo and Kaberamaido before being rolled out to other parts of the country.
He says 40 million pounds (about 100 billion shillings) has been earmarked for the project.
The minister adds that for effective implementation of the social protection program, a special secretariat has been set up at the ministry.
Posted by williamkituuka.com at 11:21 PM