WHAT IS THE SOURCE OF UGANDA’S POST 2011 ELECTIONS INFLATION? 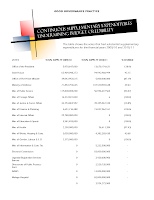 CONTINUOUS SUPPLEMENTARY EXPENDITURES UNDERMINING BUDGET CREDIBILITY
BMUA Briefing Paper (9/11) – April 2011
By Budget Monitoring & Accountability Unit (BMAU), Ministry of Finance & Economic Development
The Public Finance and Accountability (PFA) Act 2003 (16) allows that if the amount of funds appropriated by the Appropriations Act is insufficient, or that if a need has arisen for expenditure for a purpose for which no funds were appropriated by Parliament, a supplementary estimate, showing the amount required shall be laid before Parliament and that the expenditure votes shall be included in a Supplementary.
Appropriations Bill for Parliament to provide for their appropriation.
Section 12 of the Budget Act 2001 stipulates that the total supplementary expenditure that requires additional resources over and above what is appropriated by Parliament shall not exceed 3% of the total approved budget, for that Financial Year without prior approval of Parliament. The same section provides that sources of supplementary funding include suppression of expenditure on other votes (budget cuts), additional resources and re-allocation. The PFA Act 2003 (16) is in line with the provision of the Constitution of the Republic of Uganda 1995 Article 156 (2) (a, b).

Posted by williamkituuka.com at 8:11 AM