RE: MAN MADE LAKE AT PAN – KAJJANSI
The man – made Lake at Kajjansi Trading Centre which came about after Pan Clays Kajjansi removed clay for the making of building materials a number of years ago is a concern by the residents.

A few years ago, in case a person went missing around Kajjansi and its hinterland, the search would start from this man made lake. And on some occasions, bodies would be recovered and or would get afloat after sometime.

Today, it is difficult to make any investigations because the place has all sorts of vegetation growing. There is the infamous water hyacinth, the papyrus, Elephant Grass to mention a few all growing on top of the water.

Sometime ago, men running away from graduated tax operatives came face to face with a python believed to be part of the reptiles in the area. It is said that Lung Fish and other species of fish can be found within this lake. A number of snakes are residing in the same environment. It is also a manufacturing site for Mosquitoes.

Authorities should come out clearly on this man made lake. It is also true that there are some people who may not be aware of the existence of this man made lake and in mistaking the area for a mere bush could end up drowning there.

It is sad that the owners of this infrastructure have not even bothered to fence this lake off. 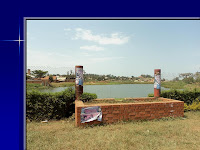 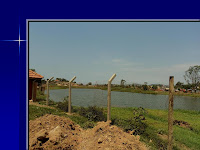 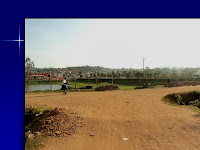 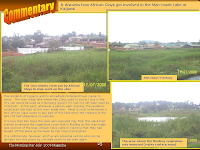 Posted by williamkituuka.com at 11:51 PM