HOW MUCH HAS SCOUL PAID TO GOVT. OVER THE 51% SHARES HELD? 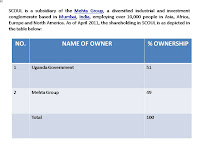 What we have gone through in the recent past where the price of Sugar was increasing on a daily basis is evidence enough that a company in Uganda is most unlikely to produce sugar at a loss. If this is so, then Sugar Corporation of Uganda Ltd should be paying for Government's 51% shareholding in the company handsomely.
William Kituuka Kiwanuka

editorial
Is sugar the real problem? Aren't we forgetting more important issues and focusing on something that is almost a luxury in many Ugandan homes? With 24.5 per cent of Ugandans living below the poverty line, does sugar really flicker in their minds?
It has been reported that the government has given a green light to the importation of sugar to boost the availability of the commodity on the domestic market. But this might still contribute to the widening of the current deficit given the fact that Uganda's balance of payments is already weak as a result of trade imbalances.
With education and maize constituting the country's major exports to the region, Uganda's import bill is higher than its export earnings. The importation of sugar into the country will mean spending more dollars thus weakening the already frail Shilling.
According to experts, Uganda's real problem is not sugar but deficit-financing. The country is living beyond its means. Uganda's expenditure is 21 per cent of Gross Domestic Product and the government raises less than 13 per cent revenue, so we borrow consistently.
Traders in Uganda are not helping the situation either as they continue to import more than export thus depreciating the Shilling further. A fall (depreciation) in the exchange rate increases the cost of importing raw materials and component supplies from overseas.
The Shilling traded weak against the dollar and other major currencies last week to about Shs2,680, and having tip-tested Shs2,695 during the early morning sessions on Friday. Money markets have predicted that the Shilling might trade in the range of Shs2,800 this week. As of yesterday, the Shilling was trading at Shs2,720 against the dollar.
It is time to focus on large issues affecting the average Ugandan. And this should be in the sphere of increasing aggregate supply in the economy. Aggregate supply measures the volume of goods and services produced within the economy at a given price level.
In simple terms, aggregate supply represents the ability of an economy to produce goods and services either in the short-term or in the long-term. It tells us the quantity of real GDP that will be supplied at various price levels. The nature of this relationship will differ between the long run and the short run.


Posted by williamkituuka.com at 4:15 AM