IN UGANDA, BECAUSE WE ARE CORRUPT, WE SUFFER THE CONSEQUENCES

The corruption we currently suffer originated with the birth of the so-called liberation of Uganda which led to a 5 year bush war. Today, it is quite clear that the engineers of this war had a hidden agenda and took many Ugandans for a ride. It is common knowledge that NRM party has had many of its functionaries as major players in vote rigging and related malpractices, yet the major reason that took these people to the bush was vote rigging by the Uganda People’s Congress (UPC), today, the rigging and electoral malpractices have taken a different dimension with a number of complex politics which has led the county to be sub-divided into 112 districts!
We are experiencing a depreciating currency and one of the reasons is the injection of money not backed by productivity, to the extent that fixed wage earners work for nothing as many lower cadres’ salaries are about if not less than US$75, just US$21/2 a day that is how Uganda has sank! Why should a Ugandan who was bribed with an NRM T-shirt turn around and cry that the economy is biting hard or one who received monetary rewards to part with his/her vote and have it to the NRM leader? Who is so young and cannot use his/her brain even after told so many times that the NRM leadership should not have gone beyond 2006, by which time according the Uganda 1995 Constitution, given the country’s history, a President was entitled to a maximum of 10 years consecutively in power? Who is so young and can not have the slightest understanding even when told that the NRM leadership has diverted much of the national resources to the defense budget hence leaving job creation, the agriculture sector and social services in dire need hence the scandalous explosion of the unemployed youth? Who is so young and could not smell a rat when the President refused to appoint an Electoral Commission with composition agreeable to the opposition? What about the corruption scandals associated with the NRM Government over the two and a half decades, does it call for an angel to make Ugandans to see sense that corruption by Government is an evil? Who is so young as an electorate and cannot smell a rat on seeing that the NRM Government institutes Commissions of Inquiry and ends up sitting on the findings?
Given the above background, Ugandans need to blame themselves for nurturing a regime which is simply ruining the future of the country and its people. It is absurd how people who have gone to school resort to demanding for more districts when there is evidence that the already many districts keep crying to Government for more resources, and once granted the district status, the few elites turn around to the poor and charge these so much hence impoverishing them the more!
While in primary school in the late 60’s and early 70’s, I could write down all the names of the districts of Uganda, and practically all the Ministers. Today, it does not make sense as districts are increased every other day to the extent that by the time a child gets a question to make a district, the same district is already sub-divided, a process which does not make any economic sense though the advocates try to reason it out to slow thinkers who cannot see far. It makes a lot more logic to put support at sub – county level for service delivery than coming up with a duplication of man power and related logistics for political reasons but no economic sense at all.
I am an advocate of good governance and do support elections, however, the state of affairs in Uganda is a cause for worry. When the Electoral Commission demands for shs 170 billion to conduct Local Council1 elections, you wonder whether there is value for money more so, when many of the LC 1 Chairman cannot even ensure that community services take off in their areas. Instead, where there are land deals and disputes where L C chairpersons can make a deal, that is where they are active. To many who see chairmanship as a life job, they see antagonizing the population for community services takes away their votes so the people end up with a law deal, yet when billions a sunk into the exercise. 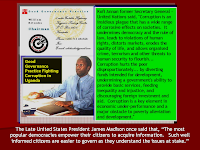 Kofi Annan former Secretary General - United Nations said, "Corruption is an insidious plague that has a wide range of corrosive effects on societies. It undermines democracy and the rule of law, leads to violations of human rights, distorts markets, erodes the quality of life, and allows organised crime, terrorism and other threats to human security to flourish... Corruption hurts the poor disproportionately... by diverting funds intended for development, undermining a government's ability to provide basic services, feeding inequality and injustice, and discouraging foreign investment and aid. Corruption is a key element in economic under-performance and a major obstacle to poverty alleviation and development."
The quotation is real in the Uganda context.
William Kituuka Kiwanuka

Contact me through the link below:
http://goodgovernancepractice.webs.com/contactme.htm
Posted by williamkituuka.com at 11:33 PM