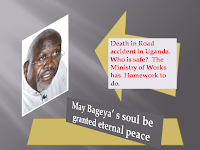 Veteran politician and former Iganga district chairperson George Patrick Bageya died on Tuesday evening after his Mercedes Benz car collided head on with an Isuzu truck.
The 7:30pm accident occurred at Nabitovu village on the Iganga-Kaliro highway. An eyewitness said Bageya was heading to his home in Naibiri in Nambale sub-county.
“The truck was overtaking another car. The airbag was soaked in blood. Bageya’s body was stuck in the wreckage. We had to cut the wreckage to remove it,” the witness said.
Bageya had travelled with his son who sustained severe injuries. The passengers on the truck were admitted to Iganga Hospital with minor injuries.
Bageya represented Kigulu constituency as the Constituent Assembly delegate in the early 1990s.
He served as Iganga district chairperson until 2001. He was also a member of the FRONASA guerilla group to which Museveni belonged.
The chairperson of the burial committee, Kirunda Kivejinja, said a funeral service will be held this morning at All Saints Cathdreal Nakasero.
A vigil would be held at the deceased’s home in Muyenga in Kampala.
Iganga district council will pay tribute to Bageya on Friday in the council chambers. Burial is scheduled for Sarturday at Naibiri in Iganga district.

Sadness engulfed Busoga sub-region(Wednesday) as people woke up to news of the tragic demise of George Patrick Bageya, one of the gallant sons and unifiers of Busoga. The once self-proclaimed President of Iganga died on Tuesday evening at about 7: 30pm in a motor accident at Nabitovu in Nambale sub-county along Iganga-Kaliro Road, while traveling from Iganga town to his home in Naibiri.
According to police, Bageya was driving his saloon car, registration number UAF 088Q, which had a head-on collision with an Isuzu lorry, UAJ 232H, that was carrying wood from Kaliro towards Iganga town. Erusania Batala, an eyewitness, said Bageya died instantly, steering while the people aboard the lorry survived with minor injuries.
The south-eastern regional police spokesperson, Samson Lubega, confirmed the tragedy, adding that the accident could have resulted from obstruction because it was dark.
Bageya served in various capacities, including as Iganga district chairman between 1996 and 2011, and has been instrumental in mobilizing for the ruling NRM party. On December 22, 2003, he was named Busia Resident District Commissioner after losing in the NRM primaries for the parliamentary race.
Bageya lost to former Iganga district chairman, Asuman Kyafu, and decided he would not contest as an independent. A trained security officer, he was later, in 2005, appointed presidential advisor on security affairs, a post he resigned in 2006 to contest for the Kigulu South parliamentary seat. His ambitions were, however, thwarted by the youthful Milton Muwuma Kalule, who is the current area MP.
In 2007, Bageya resorted to farming at his home in Naibiri, where he reared pigs, cattle and grew fruits. At the time of his death, he was a member on the Amnesty Commission, a body established by the Parliament to provide overall leadership, guidance and coordination in the implementation of amnesty to former rebels. During his leadership in Iganga district, before it was split to create Mayuge, Namutumba and Luuka districts, Bageya was nicknamed Nsolo ya Bwana, a Lusoga proverb that means a leopard with young ones cannot be hunted.
He was instrumental in matters of Busoga kingdom and national leadership, and in 2004, he warned the Basoga against rushing to clamour for the federal system of governance, saying it was inappropriate for the sub-region. Dr Ahmed Lubega, Iganga Hospital’s medical superintendent, said the body would be transferred from Iganga to Mulago hospital.
Tribute

Former Iganga district chairman, Kyafu, said in Bageya’s death, the NRM party has lost a mobiliser and negotiator in Busoga and in the country as a whole.
“Even after trouncing him in 2001, Bageya did not betray the norms and principles of the party, like opportunists do, implying that he was ready to die for the good of democracy in Uganda,” Kyafu said.
Sospeter Baite Munobwa, a former Busoga kingdom official and DP diehard, who crossed to NRM, said Bageya has left a rich political legacy. Busoga kingdom prime minister, Wilson Mutebe Muwereza, described Bageya’s death as “a total loss to Busoga and the nation as a whole”.
“Bageya has been a technical advisor to the kingdom and has on many occasions openly advised kingdom officials and the rest of the subjects on a number of pertinent issues. The kingdom has lost an opinion leader.”
Luuka district chairman, Samuel Kakyada, said he had lost his mentor and chief advisor, who supported the creation of Luuka district right from his time as chairman in Iganga until Luuka was granted district status in 2010. Iganga district chairman, Shaban Nkutu, said the district council would convene for a special session to pay tribute to the former chairman.