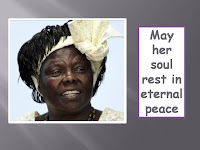 She won the Nobel Peace Prize in 2004 for promoting conservation, women's rights and transparent government - the first African woman to get the award.

She was elected as an MP in 2002 and served as a minister in the Kenyan government for a time.

"It is with great sadness that the family of Professor Wangari Maathai announces her passing away on 25 September, 2011, at the Nairobi Hospital, after a prolonged and bravely borne struggle with cancer," the Green Belt Movement said in a statement.

"Her loved ones were with her at the time.

"Professor Maathai's departure is untimely and a very great loss to all who knew her - as a mother, relative, co-worker, colleague, role model, and heroine; or who admired her determination to make the world a more peaceful, healthier, and better place."

The organisation did not provide further details.

Ms Maathai, who was a professor of veterinary anatomy, rose to international fame for campaigns against government-backed forest clearances in Kenya in the late 1980s-90s.

Under the former government of President Daniel Arap Moi, she was arrested several times, and vilified.

In 2008, Ms Maathai was tear-gassed during a protest against the Kenyan president's plan to increase the number of ministers in the cabinet.

For those who loved and admired her, she was "Wangari wetu" - our Wangari - he says. But for her enemies, she was derided as "yule mwanamke" - that woman.

In her speech accepting the Nobel prize, Ms Maathai said she hoped her own success would spur other women on to a more active role in the community.

"I hope it will encourage them to raise their voices and take more space for leadership," she said.

The President of Liberia, Ellen Johnson-Sirleaf, said she was saddened by the news.

"Africa, particularly African women, have lost a champion, a leader, an activist. We're going to miss her. We're going to miss the work she's been doing all these years on the environment, working for women's rights and women's participation," she said.
Posted by williamkituuka.com at 12:37 AM