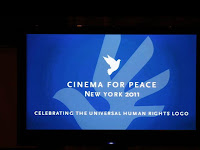 The first ever logo for human rights was unveiled Friday night, at an event in New York hosted by the global charity organization, Cinema for Peace. The logo aims to become a universally recognized symbol for the promotion and implementation of human rights around the world. It comes at an important time, as millions of citizens in the Middle East and around the world are struggling against oppressive regimes and myriad human rights violations.
In a presentation introducing the logo for the first time, news anchor Ann Curry explained the concept of the logo, stating, "If symbols are a way to communicate what we value most, it is time for a symbol for human rights." The new design, which brings to mind both a human hand and a bird in flight, was created by Serbian designer Predrag Stakic. Stakic's logo was the winner of an online contest, and was chosen from overwhelming pool of 15,000 entries which were submitted by designers in 190 countries.
The field of entries was narrowed down to 10 finalists by a panel of judges that included some of the world's most important leaders and human rights defenders. Nobel Peace Prize Laureates Aung San Suu Kyi, Jimmy Carter, Muhammed Yunus, Mikhail Gorbachev and Shirin Ebadi, as well as Chinese artist Ai Weiwei, Cambodian human rights activist Somaly Mam, Wikipedia founder Jimmy Wales, Columbian musician Juanes and UN High Commissioner for Human Rights Navanathem Pillay all voted for the new human rights logo, which they hope will some day be a globally understood symbol of hope. When asked about the project, and its impressive jury, Human Rights Logo supporter and CEO of United Internet Media, Matthias Ehrlich said, "The jury reflects the diversity of the world, with people representing nearly every continent. Most importantly, they are people who are engaged in the human rights movement, meaning that the movement itself is choosing its symbol."
In a video message to those gathered at the presentation, Burmese opposition politician and human rights icon, Aung San Suu Kyi said, "I look forward to the time when this logo will be seen all over the world, from the smallest towns to the biggest cities. I hope that little children and babies will see it and it will be a sign of happiness, peace and security to them."
Advertisement
After the unveiling of the logo, Cinema for Peace and United Internet Media (parent company of Mail.com) hosted a dinner reception at Gustavino's restaurant. Guests included Robert De Niro and his daughter Dreena De Niro who served as a co-host, alongside world leaders and activists such as German Foreign Minister Guido Westerwelle, One Campaign president Michael Elliott, Ugandan children's activist Angelina Atyam, human rights leader Caroline Gomes, and opera singer Jessye Norman, who wowed the crowd at the presentation with a rendition of "Amazing Grace".
Also in attendance were Leila and Manoubia Bouazizi, sister and mother of Mohamed Bouazizi, the man who inspired the Arab Spring by committing suicide by self-immolation in January of 2011. The assembled audience was moved as the pair spoke of his life and the repercussions of his death. Through a translator, his sister Leila Bouazizi expressed solidarity with the revolutions taking place across the Arab world, and called upon human rights leaders to stand with those who had sacrificed themselves for freedom, justice and dignity - the ideals of the Arab Spring.
As citizens around the world protest and make sacrifices for the ideals Leila Bouazizi spoke of, they will have one new tool in their arsenal, a symbol that demands human rights for everyone, in every language.

by Deirdre Corley, New York
Posted by williamkituuka.com at 12:21 AM