I THANK THOSE WHO HAVE IMPLEMENTED MY ROAD IDEA TO EASE TRAFFIC AT KAJJANSI T. CENTRE 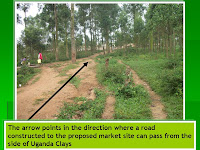 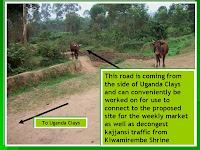 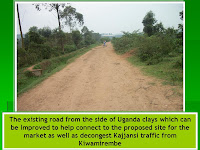 On Saturday, January 15, 2011 I wrote: 'THE PICTURE WHICH KAJJANSI WEEKLY MARKET DEPICTS IS A SYMPTOM OF THE DECAY IN NRM ADMINISTRATION,'and in the article I brought out the issue of a road that can help ease the flow of traffic. Just out of anxiety today, Thursday 8th September 2011 morning, I decided to move around to see a new site proposed for Kajjansi Police Station given that I wanted to be sure that my road proposal still made sense. I was able to see the site which is in the neighbourhood of the Kajjansi Power Sub-station. I then continued and to my surprise found that a road through had been made as I proposed. I must say thank you to Uganda Clays because without their cooperation the initiative would not take off. I wish to appeal to Uganda National Roads Authority to improve this road as it has a high potential in easing traffic flow more so when there are functions at St. Mary's Kitende as well as Kiwamirembe Shrine.
If we can use our offices well and cooperate to see proposed ideas implemented, Uganda will definitely be a better place for us all.

Meanwhile, I wish to appeal to Uganda Clays Ltd about the Water hyacinth which is taking advantage of the water bodies around to multiply. This weed needs to be cleared as it has potential of multiplying and infecting many other water bodies.
Thank you all.
William Kituuka Kiwanuka
Posted by williamkituuka.com at 11:37 PM