IT IS TRUE, IN UGANDA IT IS AN AUTOCRATIC REGIME IN STEERING

It surprises me that to-date the NRM Government cannot accept its mistakes. It is sad that after 25 years in power, the NRM could make blunders that are leading to strikes in the country. It is simply common sense that a teacher or any salaried person getting peanuts can deceive Government to keep working on when the salary cannot take him or her for a week. The arrogance of NRM leadership if not changed this country is in big shit. Some leaders in NRM have shamelessly looted the country and now instead of Government realizing their mistakes, they are busy threatening people. This is rubbish. If NRM is not capable of managing the country, the best is to quit instead of taking people for fools after messing up. What is sad is the way some of our leaders think that they should be the controllers of all the wealth of this country. The NRM revolution has now turned a curse to the people of Uganda. However, as a believer, I think God will not forget us. The way this country is being looted by a few, the way some people show their wealth moreover ill gotten is shocking. The prayer is that our leaders get back to ground and think about the welfare of those people whose wealth they have looted over years.
William Kituuka Kiwanuka 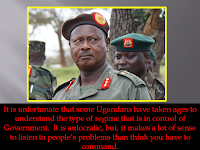 Posted Saturday, September 3 2011 at 18:00
The Senior Presidential Adviser on Media Affairs, Mr John Nagenda, has described President Museveni, his boss for close to 25 years, as a “mischievous” and “autocratic” leader.
Mr Nagenda, a respected media personality and one of Uganda’s best spin doctors, said Mr Museveni no longer listens to wise counsel and is surrounded by opportunists and sycophants.
“I don’t think he has remained exactly the same though, in fact, I would say that he is more autocratic than he was when he first came,” Mr Nagenda said in an exclusive interview with Sunday Monitor, at his Muyenga home.
He candidly noted that the President has changed over the last 25 years, become “all powerful” and has since lost the courageous and independent minded advisors and ministers he previously had around him.
“… But when you get somebody who is now all powerful, it really hurts me when there are meetings or press conferences and whenever, the President says something and you ask yourself “what did he mean?” but the others laugh and cheer him on,” he said in reference to Cabinet, which according to him lacks the spine to stand up to the President whenever there is a contentious issue.
Mr Nagenda’s observation comes hot on the heels on the proposal by the President to give more than 7,000 hectares of land of Mabira Forest to the Sugar Corporation of Uganda to grow sugarcane. The proposal has caused public outcry to stop the move yet there seems to be an ill-omened silence from his Cabinet.
The provocative but humorous presidential adviser disagrees with his boss over the proposal calling it “unwise” and called on Ugandans to resist it. Mr Museveni argues that the decision would increase sugar production and help solve the current sugar shortage in the country.
He called on Ugandans to stand up and speak out on issues affecting the country’s development.
“But unless everyone of us takes the opportunity to say what we think is right, then we are going to find ourselves in a completely different time because there will be one person deciding, surrounded by his acolyte and may that day never come and may Ugandans come out and with respect say to their leader; “You have been a very good leader to us and don’t ruin it.”
According to Mr Nagenda, recent opposition within Cabinet has surprisingly been led by none other than the President’s wife, Janet Museveni, who he prays should convince the President not to give away part of Mabira Forest.
In this interview, Mr Nagenda speaks about a wide range of issues, including the two people who he thinks can replace President Museveni and dissects the workings and character of the opposition.

Posted Saturday, September 3 2011 at 18:00
As the new school term opens tomorrow, teachers under their umbrella organisation- Uganda National Teachers Union (Unatu), have maintained that they will not teach unless the dispute over their salary increment is settled by government.
“We should not be repeating ourselves on this, our stand is still on,” Unatu spokesperson Teopista Birungi told Sunday Monitor.
Teachers are currently pushing for a 100 per cent pay rise. Union officials called off the first strike in July, pending negotiations with the government, that have since flopped. They now maintain that the strike resumes tomorrow.
The government on the other hand insists there is no money for salary increase this financial year and has threatened to take disciplinary action against teachers who will participate in the strike.
“Our head teachers are receiving a lot of intimidation from Resident District Commissioners and police in various districts but we are not changing our position about this,” Ms Birungi said.
This week, Parliament unsuccessfully pushed government to increase the teachers’ salaries by 50 per cent this financial year and another half in the next two years.
The report by the Committee on Social Services presented by its chairperson, Dr Sam Lyomoki, before Parliament, recommended a phased increase in the salaries of all teachers beginning with a 20 per cent increment this financial year.
Cutting down on wasteful expenditures like seminars, entertainment, travel inland, travel abroad, fuels, vehicle maintenance and repairs among others would realise the money.
The committee then proposed that government achieve the 100 per cent within the next three years. However, some MPs were opposed to the move.
“The 100 per cent demand for teachers’ salaries did not start today. Let the increment be effected or else we don’t approve their budget. There is waste expenditure in each ministry where we can get the money,” Mr Francis Epetait (Ngora County) said. The Prime Minister, Mr Amama Mbabazi and a number of ministers argued that there was no money to effect the increase.
“We cannot pass such a resolution. The rise is not a one-time payment but it’s continuous. Besides when you start cherry-picking, other civil servants will also come out to complain. In order not to incite others to strike, we shall give them a salary rise across the board,” Mr Mbabazi said.
“How come the government identified Shs102b to give to an individual called businessman Hassan Basajjabalaba and it is saying there is no money for teachers?,’ Leader of Opposition, Mr Nandala Mafaabi, said.

STRIKING LECTURERS LIKELY TO FACE DISMISSAL
It cannot solve the problem dismissing all lecturers may be that will be the beginning of the fall of Museveni's Government. The problem is management of the economy. Once the Government fails then the outcome is what we see today. We told Ugandans that President Museveni was tired as is common with a person overstaying in power in a situation like Uganda. Instead of quitting the President decided to change the Constitution to have unlimited term, he is increasing districts every other day just to see himself in power but what about the other players in the economy?
William Kituuka

By Abdu Kiyaga
Posted Saturday, September 3 2011 at 18:00
Makerere University Council is pondering dismissal of lecturers, following a strike that has now entered day four.
The university’s highest decision making body, deliberated about the strike on Friday and according to sources that attended the meeting, resolved to send letters of ultimatum to the lectures on Monday to return to work in a week’s time or face suspension from work.
“Whoever will not return to work, will be suspended,” the sources, who did not want to be quoted because they are not allowed to speak on behalf of the University Council said.
At the meeting, according to the sources, some Council members also tried to move a resolution to have all the striking lecturers suspended and put on half pay as per Employment Act, 2006 but such a proposal was dropped because of the likely legal repercussions.
University Council Chairman Eng. Charles Wana-Etyem said the meeting had decided to meet the minister of Education, before a final resolution is communicated. He denied that the striking lecturers would be suspended.
“It is still premature to announce when the university will be opened but it will not be in a week’s time,” Wana-Etyem earlier told journalists.
Just hours after the closure of the University on Thursday, some Council members protested Eng. Charles Wana-Etyem’s decision to order the P. 3
Closure without consultation from other members and stakeholders.
“He does not have any mandate to take that decision and he will be responsible for the circumstances. The constitution does not allow him to do that,” Mr Benard Luyiga, who is a council member said just after Eng. Wana-Etiem announced the closure of the university.
Eng. Wana-Etiem, however, reportedly apologised during the meeting saying that he had got orders from officials and he thought that was the only way the situation at the university could be tamed.
Posted by williamkituuka.com at 1:01 AM