THERE IS NO REFERANDA OR ANY GIVE-AWAY OF MABIRA 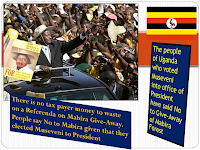 Those who are advocating for a REFERANDA on Mabira should forget it. The people of Uganda, using the commonsense they have have said there is no way Mabira forest can be given away for production of Sugar cane as the environment deteriorates on. This is obvious and should be respected by all who wish Uganda well. As for the Parliament, stand warned: As long as people elected you to represent them, stand for their will. How many did not go back to the 9th Parliament. Make your blunders but people will decide come the next election.
William Kituuka Kiwanuka

THE PICTURE OF UGANDA FORESTS
Before the rule of Idi Amin, Uganda had a relatively sound environmental record. During his reign (1971-1979), the forests suffered from civil and political strife. From 1971 to 1987, Uganda lost 50 percent of its forests, including virtually all of its primary forests.
Between 1990 and 2005, Uganda lost 26.3 percent of its remaining forest cover, and deforestation continues today at a rate of 2.2 percent per year, mostly due to subsistence farming, cutting for fuelwood, and colonization by the burgeoning population.
While Uganda is famous for its mountain gorillas, it is home to some of the highest concentrations of biodiversity in Africa. More than 5,000 plant species are found in the country along with 345 mammals, 1,015 birds, 165 reptiles, and 43 amphibians.

WE WILL STAND OUT FOR MABIRA SAY ACTIVISTS
By Monitor Reporter

In as much as President Museveni said the decision to give away Mabira will depend on Parliament, activists have vowed to challenge legislators, should they concur with the President to give part of the forest land for sugarcane growing to Mehta.
The activists under their umbrella Save Mabira Crusade, argue that the laws in the Constitution, the National Forest and Tree Planting Act and the Land Act prohibit the person of the President or government from changing land use whether by permit or by lease, and that they shall seek public justice or international court to achieve their cause.
“Our position is clear, Mabira should not go under any circumstances, we have a legal and moral duty to protect the forest. It is illegal for the forest to be degazetted and Parliament does not have any legal stand to do so,” Mr Onesmus Mugyenyi, the deputy executive director Advocates Coalition for Development and Environment, said yesterday.
The crusaders also said they are imploring ways of criminalising and suing government through international courts of law for acts such as giving away public property.
Posted by williamkituuka.com at 12:37 AM