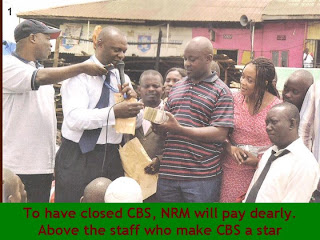 What happened on Friday, March 26, 2010 when Buganda officially closed the mourning for the burnt Kasubi Tombs (Buzibu Azala Mpanga) when hundreds of people turned up for prayers is testimony enough that Kabaka Mutebi’s authority if well used by both Buganda Government and the Central Government, can greatly be used for the development efforts of Buganda region. However, it is unfortunate that Buganda kingdom has run broke and implementation of its flagship development projects have stalled, the Daily Monitor revealed (CBS closure breaks Mengo’s back) .
Mengo officials say since government took the Central Broadcasting Service radio off air five months ago, their ability to reach out and mobilise people and cash has been impaired. The kingdom’s business of tapping money from willing donors, locally and internationally, through sale of ‘Buganda certificates’ has slumped by 33 per cent, according to Ms Joy Mukalazi, the secretary to the Annual Donation Fund - the formal name of the fundraising. Each of the certificates, which buyers hold with prestige as testimony of their contribution and allegiance to Buganda, go for between Shs1, 000 and Shs10 million making it affordable across different income groups. The Broadcasting Council closed CBS and revoked the radio’s license on September 10, last year accusing its presenters of breaching minimum broadcasting standards and inciting that month’s bloody pro-Kabaka riots in and around Kampala. Matters are not helped that the radio, which had 150-strong staff, was a profitable trading arm of the kingdom, generating a monthly gross income in excess of Shs1 billion, a board member of the radio, who preferred not to be named to freely discuss the sensitive business information, said.
Posted by williamkituuka.com at 12:56 AM